The Symptoms: Miracles Of The Night, Trafó Budapest, 22 September 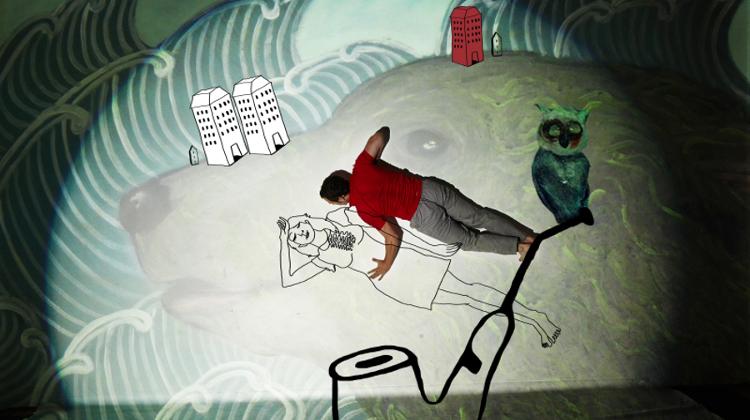 Has it ever happened to you that you’ve spent a night awake with someone yet „nothing” happened between the two of you? Nevertheless, your world turned upside down the next morning? The drawing girl and the boy recreate this staring one another, dream-like weird something.

The performance was inspired by the title poem of Sándor Weöres. The world of the vision poem is free, rhapsodic, irregular and very often – just like the poetry of Weöres – ageless. The performance recreates the language of the poem on stage by the paintings, graphics and animations drawn by visual artists Ildikó Mezei and Éva Taskovics.

Bence Samu has been developing the software called Animata since 2007, with the use of which the objects and figures drawn by the visual artists become alive. The universe of this poetic vision is adapted for the idiom of the stage through a continuous interplay between the projected image and the flesh-and-blood performer, whose relationship creates peculiarly surreal situations – the lines spring into existence, interacting with the performers.

Reality and illusion merge into one another, constantly rewriting each other and then…

„…Comes the sweeping- machine with dull murmur,
and the dawn running behind it
with its fluttering blonde hair,
morning is rattling, light is flying…
and this broad night miracle,
this weird something,
we saw it together:
you and me.

Viewers named Gyula Tóth and Pál Mogyoró in their ID cards may watch the performance for free.