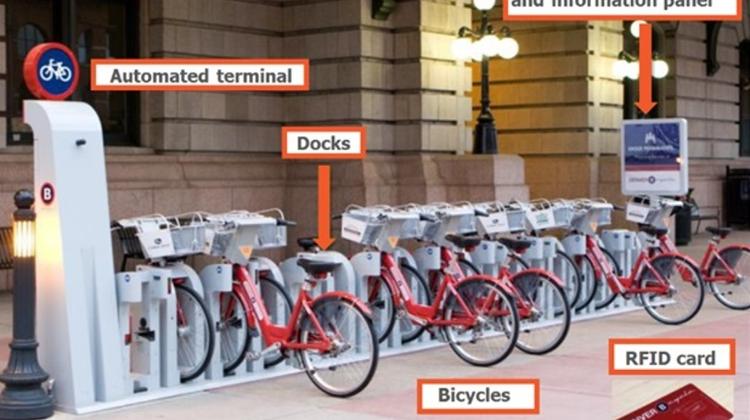 The introduction of a Bubi-like public bike system in Szentendre, Hungary (pop. 25,000) is feasible, according to a recently completed six-month study. Optimally, the study concludes, the system would offer electric bikes at 11 prominent locations throughout the city.

The Regional Environmental Center (REC) carried out the study in cooperation with Szentendre City Hall and the Centre for Budapest Transport (BKK), the operator of Budapest's Bubi system. Co-financed by the European Commission's CIVITAS Initiative for cleaner and better urban transport, the study looked into eight alternative systems in order to assess estimated costs and benefits for the city.

The study showed that bike sharing would increase the accessibility of public transport hubs and support thousands of commuters to reach their final destinations on a daily basis. It would also give tourists a fun way to tour the historical riverside settlement and its environs.

If the bike-sharing stations were to cover strategic locations in Szentendre - such as the suburban railway station, certain residential areas, the Danube promenade and other key tourist attractions - they would offer an ideal alternative to traveling by car. The electric motor of the proposed e-bike would provide pedal assistance to user unable to cope easily with Szentendre's challenging topography.

Based on the results of 300 completed questionnaires submitted during the study, Szentendre residents like the idea of bike sharing:

While the city is generally well suited to a bike-sharing system, there are some challenges, the two biggest being the lack of good cycling infrastructure and Szentendre City Halls limited budget. As a next step, Szentendre will actively work on developing its network of bike lanes and paths. The required interventions can be addressed in parallel with preparing and implementing a bike-sharing scheme.

The city will also invite bike-sharing technology providers to showcase their products and seek sources for funding -- potentially utilising the Competitive Central Hungary Operative Programme (VEKOP). A call for proposals is expected soon.

While a timeline for bringing bike sharing to Szentendre remains unclear, the project has opened the door to a new way of expanding sustainable transport in Budapests greater metro area. The idea of combining bike sharing with the HÉV suburban rail network opens a new avenue of system development. As Péter Dalos, Operations Officer of the MOL Bubi emphasised:

The concept of SzeBi is a unique approach and a wonderful opportunity to place Szentendre as a frontrunner in the field of sustainable mobility.

The feasibility study results are summed up in Hungarian and English.