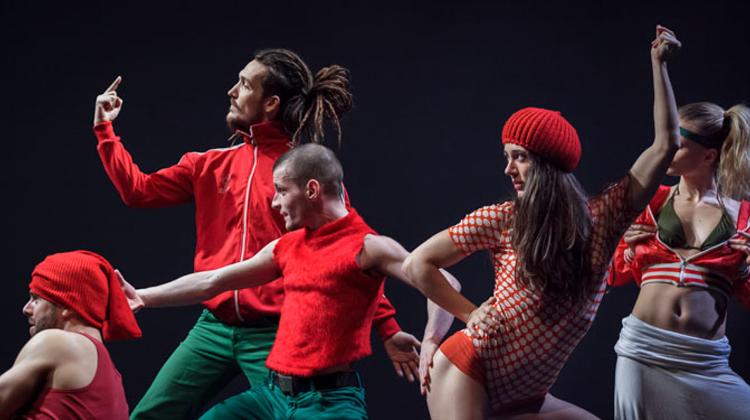 Blending contemporary dance, circus and live music creatively, VIRTUS is based on inter-arts collaboration. It is Eva Duda Company’s first adventure into the world of the underground circus on 13 & 14 November at Mu Theatre at 7 pm.

The company’s dancers set foot on unknown ground: using many dimensions of theatrical space, extraordinary instruments and new ways of expression, the performers explore the potentials of aerial maneuvers in daring heights. Playing with the whole spectrum of space, Zsófia Zoletnik and András Mező, the two key figures of the Firebirds Juggling Group also mobilize new qualities as dancers and acrobats.

"So no wonder that Eva Duda Company's latest show that strives to conquer daring heights is so fresh, graceful and free: it tamed and courageously reinterpreted gravity, one of nature's most dreaded laws. It folded danger like a rope or ribbon and named it Virtus."
Zsuzsanna Komjáthy, Tánckritika.hu

About the four creative teams:

The Company became an independent ensemble during the theatrical season of 2009 / 2010 based on the choreographer’s initiative. Éva Duda established her company after creating Lunatika, her award-winning performance premiered in autumn 2009. The team’s core is composed of reputed dance artists and fresh talents: the community offers a creative space of interaction and mutual inspiration for both young and dynamic debuting performers and experienced, acknowledged dance artists with great professional background. Due to its dancers’ rich experience, the company is characterized by an energetic and suggestive performing style, openness and high standards of technical skills.

Zsófia Zoletnik and András Mező have been engaged in performing arts for over twelve years: they have rich experience in traditional toss juggling and club swinging techniques, object manipulation, ground, partner and air acrobatics. Co- founders of the widely reputed Firebirds Juggling Group, Zoletnik and Mező have also contributed as creators and active members to the Freak Fusion Cabaret, a project that swept into the world of the underground circus a few years ago. They are the unique Hungarian representatives of the contemporary circus.

„Edina Mókus Szirtes is one of the most universal singer-musicians, or better to say, artists of recent years...”
Mihály Rácz, Lángoló Gitárok

Having graduated from the Faculty of Music of the University of Szeged, Szirtes is a singer, violinist and one of the most universal artists of Hungary’s world music scene. In 2006 she founded Fabula Rasa, her band characterized by musical eclecticism and many folklore themes. The band won a Fonogram Hungarian Music Award in 2010. Being its first female winner ever, Szirtes was awarded the Artisjus Prize for best pop music composer in 2012. She has released six albums as an independent artist and together with her band, while she has contributed to over 40 albums as a performer or composer.

He is a self-taught composer, electronic music producer, bass and guitar player. His theatrical career started in 1995 when he joined Ad Hoc, a theatre company founded by Viktor Bodó, and he wrote his first pieces of film music for the Chalk Circle Theatre’s performances. He has composed music for over fifty dance performances, theatre pieces, radio plays, documentaries and feature films. Between 2008 and 2012, Sandant, Kunert’s underground triphop band performed at major Budapest clubs and festivals and also played at Serbia’s Exit Festival. He has worked together with Akkezdet Phiai as a co-producer and instrumental musician since 2008, has been a member of Hungarian band Elephant since 2012 and regularly performs at Slam Poetry shows. Kunert has been choreographer Éva Duda’s partner since 2003 with whom he has co-created over ten shows.