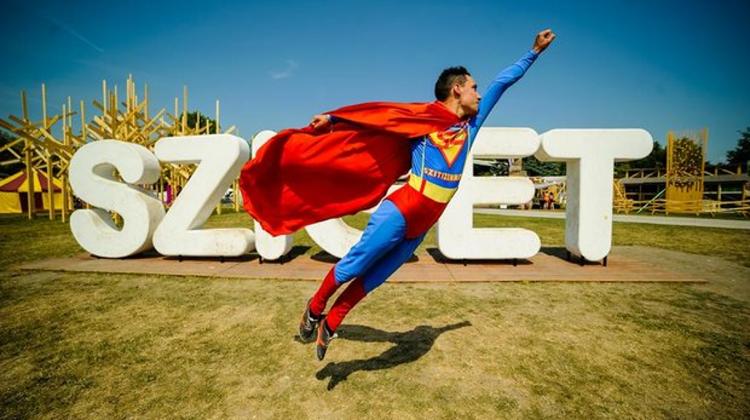 Tickets for Sziget 2016 are now on sale, with special offers available for the first 24 hours. We've got the details from the super-man who founded one of Europe’s most popular cultural events. Also below you can now watch the best bits from Sziget this year - which XpatLoop.com asked founder Károly Gerendai about, amongst other related topics including his future. As you may know, he's one of post-communist Hungary’s success stories: from roadie to organiser of four mega festivals, and more...

So sales for Sziget 2016 are already starting in 2015, with offers for the first 24 hours - until noon 25 November. What's included in this sales promotion?

There are quite a few really nice early-bird offers, for example a Special T-Shirt + Szitizen Prime Wristband is one affordable package, which includes a limited edition Sziget T-shirt and Szitizen Prime wristband to wear until Sziget comes around again next summer.

Plus there's also a Private Party held at Sziget for those who were the first to decide to be part of Sziget 2016. And there is a Golden Ticket - buyers can choose between several options with this one, including priority entry, one-time access to the VIP area...

There are also Very VIP packages for the winners of the first 24-hour draw, and also a once-in-a-lifetime opportunity to have a backstage dinner...all details are available online at SzigetFestival.com

Ok let’s put Sziget in context with all the other festivals you organise, and also Budapest Park. Do you have a personal favorite?

Firstly, still not everyone knows Budapest Park operates for five and a half months in the summer season. It attempts to provide Sziget’s atmosphere in the city on those nights when concerts take place there.

Sziget is my favourite, because it was the first festival. It is like a first child. This was the toughest birth. And it has grown to be the biggest, so it will always remain number one. This year the 23rd Sziget successfully took place. A lot of things have changed over the years, and my interests have broadened. Nowadays we also hold gastronomic events, with the Gourmet Festival being the biggest in that sector.

I don’t do anything that I don’t feel emotionally attached to. I only deal with things that are close to my heart, so in a way it's hard to differentiate between them all, be it WAMP, Sziget, and any of the others.

WAMP had been around for years now, first I had a 51% share, my interest grew in it, and now I own it 100%. Luckily it is also improving. The need for contemporary design products is high, and we have managed to widen the range of exhibitors at WAMP.

Today, artists and designers from 5‒6 countries are constant exhibitors. Internationalisation not only takes place amongst them, but we have reached out to markets in neighbouring countries too. We also hold design fairs in Vienna and Bratislava.

At Budapest Park, the Sziget company was firstly just the programme line-up organiser. Back then we did not own any of it. The place ended its first year without profit, it actually made a loss. So they asked us to organise the whole thing, and one of its owners decided to quit and cut financial support. He offered to sell us his share...

To cut a long story short, we decided to buy in, with one my friends, just two weeks before the re-opening. Since then the 3rd season has passed, and luckily the place is improving in terms of number of concerts, and audience sizes. Because of the associated loud music, such a venue can't be right in downtown Budapest, yet the location we picked in the 9th district can easily be reached, say with the No. 2 tram.

Most people only go to Budapest Park for the concerts; they don’t just 'pop in' like at other places, so it is only open when there are special programmes and concerts taking place - which of course include well known international bands.

Sziget’s little brother is called VOLT, and it is mainly intended for Hungarians. It always strives to present various genres of music, but its main orientation is still rock. David Guetta had a mega concert there this year, the background to that is he originally was intended for Sound, but he could only make it during VOLT.

VOLT is mainly about music, but there are other cultural events too. When choosing programmes, we mainly look at local youth trends. 95% of the visitors are from Hungary, we have tried to reach out to Austrians for example, but without much success. VOLT is visited by many people who were part of the original Sziget audience, as this festival in Sopron is close to them in terms of musical repertoire and size - Sziget used to be 'cosy'.

Sziget is now an international, multicultural, artistic festival. It's of a high standard, in international terms, and the way it's presented makes it attractive to people from all around the world. Sziget is now in fact the number one touristic attraction in Hungary, bringing almost three times as many tourists as Formula One.

Eight-five percent of those buying a Sziget season ticket are from abroad. Daily tickets are favoured by Hungarians, so the ratio ends up being about 50:50 foreigners (including expats) and Hungarians at the festival.

Balaton Sound also attracts a lot of visitors from abroad. It is a premium festival that provides high quality in terms of services, it mainly focuses on Electronic music, and on the really lovely shores of Lake Balaton.

Audiences united for the environment

I feel it's important to mention that in 2015 all our festivals had petitions for Live Earth, ahead of the Paris Climate talks, to warn the leaders of the world about the need for environmental sustainability. Our aim was to achieve one billion signatures in order to establish a worldwide agreement, like in Kyoto ten years ago. Leaders need to take responsibility and take effective steps towards solving climate issues like CO2 emission problems.

How do you see the future of Sziget, VOLT, Sound, and all?

The festivals have reached their limits. I don’t see big changes in the future. In the last 10‒15 years it has become a trend to organise festivals. There are a lot of them, while the number of performers who the audience want to see is limited. Everyone wants to get the same stars at their festival. This race is getting out of control because the price of the performers is constantly increasing; basically it’s a bidding war.

Let’s say if we wanted to have the same programme next year, that would mean an extra 30‒40% on the price, but the audience would not pay that much more. So we really must find a solution to this aspect as it affects everything. If the programme gets more expensive, we will not be able to financially support it because if the ticket prices go up, people will not buy them. We must do something in order to get visitors not to focus so much on the performers, but on the experience that our festivals provide.

For this, all individual services of the festivals must be improved, personalised more, so that guests feel thay are not just one of many. Visitors have to feel like they are experiencing something unique. In my opinion, we are heading in the right direction, for now we often sell weekly tickets without people even knowing the actual programme list.

Finally for now, what's your vision for your own future?

I want to continue with this while I have the motivation to go to work in the morning and think about improving the next festival.

Today, a lot of things interest me, so I deal with various areas of business. But for now the Sziget festival takes up the biggest part of my working life.

I do have at least another 2‒3 project ideas, but I don’t know yet when I will be able to spare time for them. I would like to spend more time with my family, and travel around the world.

A passionate event organiser since high school, he founded Sziget Ltd when he was 22 with his friends using his personal savings. This has expanded into a leading European event organising company. Sziget Ltd also organises the Félsziget Festival in Romania, the largest festival in Transylvania.


Gerendai has a record of outstanding public service. He participated in the campaign for tolerance; his company organised one of the events in the 1998 Nobel Peace Prize winning campaign to eradicate landmines.

Founder and managing director of the initiative for the support of public service advertising uniting the country’s most powerful media organisations. He engineered the ‘I Love Hungary Club’, a think-tank bringing together public figures. Co-owner of the first Michelin-star-winning Hungarian restaurant and owner of one of the largest wine and contemporary Hungarian art collections.