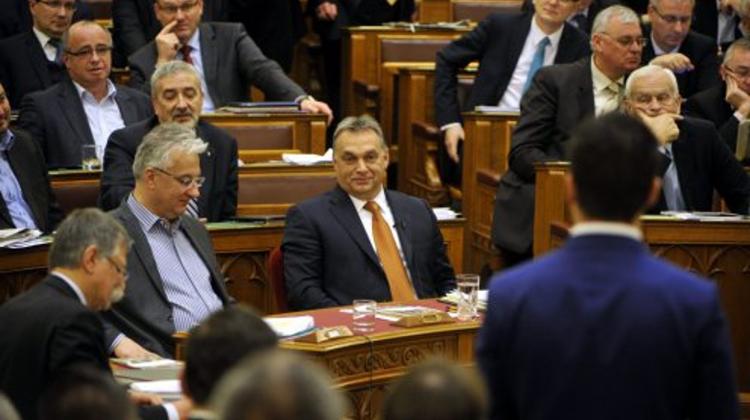 In the question-and-answer round of Parliament’s plenary session on Tuesday, Prime Minister Viktor Orbán said that the Constitution does not support the erection of statues in honour of political leaders in government during the time when Hungary had lost its sovereignty.

A Socialist politician asked the Prime Minister whether he would support the erection of a statue in honour of Bálint Hóman, the openly anti-Semitic education and religion minister during the Horthy era. He added that a civil society organisation still wants to have the statue erected, and it had also received ministerial funds.

Mr. Orbán said that Hungary lost its sovereignty on 19 March 1944, and regained it on 2 May 1990. He said that there may have been various reasons for collaboration with the occupying powers, and different depths and features of collaboration, but the Government cannot support the erection of a statue in honour of a politician who collaborated with oppressors of Hungary.

He added that for the same reason he would not support the erection of a statue in honour of Miklós Horthy either.
Mr. Orbán stressed that the Constitution lays down the right of citizens to establish organisations, and the Prime Minister cannot deprive them of this right.

At the same time he also explained that, while he is not shifting this responsibility, the application of the civil society organisation for support had not reached the level of the highest decision-makers.

He added that it is the Prime Minister who must assume ultimate political responsibility for operations of the Government, and therefore he is ultimately responsible for the grants given to this civil society organisation. He said that he is happy that the organisation in question decided to return the funds, but he was sorry that the Hungarian parliament had to debate this issue “in the midst of verbal fisticuffs”.

The Prime Minister also stated that “our feeling is that the fight against anti-Semitism is greatly compromised by the fact that representatives of the successor party of another dictatorship regularly position themselves on the front line. […] And this is a problem, because at times like this there is a reflex reaction among the Hungarian people to call attention to the statues which were erected to honour those who served the communist dictatorship; and then instead of having a sensible discussion on the issues related to anti-Semitism, we have already lost our way”.

“I do not tolerate any form of corruption”

In response to a question from a Jobbik politician, the Prime Minister said that he does not tolerate any form of corruption.

He said that he does not recommend that Hungarian political life and the National Assembly take over the role of the Prosecutor’s Office or the police force. “I will not turn Hungary into Romania”, Mr. Orbán said, explaining that he is not willing to usurp the law enforcement competencies of public authorities through extraordinary procedures.

He said this in answer to the opposition politician’s suggestion of establishing two committees of investigation: one to investigate Jobbik’s relations with Russia and the support received from them, and the other to look into the acquisition of wealth by persons related to Fidesz.

Mr. Orbán also said that he does not tolerate any form of corruption, has not in the past and will not do so in the future. He added that when decisions are made – by him or the Government – the best interests of Hungary are kept in mind.

“If you do not believe this, ask those who once thought that there is another option. You could ask your new supporter, for example”, he told the Jobbik representative.

Mr. Orbán explained that he had looked at the lists of the wealthiest Hungarians, and he has not found any Fidesz members among the first ten, although they have been governing the country for ten years now. He said that “In light of the above, I think this is ridiculous and I suggest that we talk about the issue seriously when there are at least five Fidesz members among the top ten. I am afraid this will not happen tomorrow”, he added.

He said that Jobbik is full of criminals and is a “kept” party, and suggested that they face the public and explain themselves.

In response to a question from the Socialist party regarding land auctions, Mr. Orbán said that an auction is not a lottery: no one has ever “won” anything from the Government. At the end of the auctions the money will have to be paid. He congratulated Minister of State László L. Simon’s wife for buying a piece of land. He said that she had done so wisely.

The Socialist representative also asked the Prime Minister whether the Government is willing to help out the meat factory in Pápa, which is currently under a winding-up procedure. Mr. Orbán said that people can count on him, thus the people of Pápa can do so, too.

Another Socialist representative raised the issue that the number of poor people in Hungary is increasing year on year, which in his opinion is a result of corrupt leaders voting for decisions “allowing their dear relatives to sit by the public procurement pot”. He asked whether it was at the explicit order of the Prime Minister that governing parties approved an amendment on the issue.

Mr. Orbán said that the Government only looks at the interests of Hungary when deciding on proposing legislation.

He questioned the credentials of the opposition to pass judgment. The Prime Minister asked why under the Socialist government there was no regulation in force which was even nearly as strict as the one which the opposition politician is demanding from the current cabinet .

We must continuously work towards integration of Roma

According to a Jobbik representative, the greatest social tension is Hungary is a result of the coexistence of Hungarians and Roma, and theft, fraud and corruption cannot be separated from Roma policy either. Recalling the issues of the National Roma Self-Government (ORÖ), and the role of Flórián Farkas – who was appointed by the Prime Minister – he asked Mr. Orbán how much longer he would tolerate all this.

Mr. Orbán agreed that in recent years the Roma Minority Self-Government has been dogged by constant internal disputes, and the opposing factions do not really mind what means they use, he said. At the same time, he rejected the assumption that this means that the integration programme aimed to benefit the Roma community has failed – although, he said, he cannot really say it has succeeded either. In order to achieve this, we have to work tirelessly, he emphasised.

Mr. Orbán stated that the fact that an infringement had occurred is no reason to stigmatise everyone involved, every citizen. The fact that there is disharmony instead of unity in the Roma Self-Government is a problem, he said, noting that it was the current Government which declared being both a representative in a self-government and Parliament at the same time to be a conflict of interests.

In response to a suggestion by a politician from LMP that former president of the ORÖ Flórián Farkas is responsible for suspected corruption cases in the self-government, the Prime Minister said that Parliament could be turned into a forum on various individual issues, but that would lead to disgraceful situations. He added that at the same time certain scandalous issues must not be left unaddressed: questions about the Roma self-government are being posed by Jobbik, a member of which can be linked to Hungary’s largest “company graveyard”.

The Prime Minister said that perhaps it would be better to wait for proceedings to finish, so that they can review the results and continue the discussion in light of them. The investigations have not even been concluded yet, but the mud-slinging has already started, he said.

He also warned against Parliament taking over the task of the law enforcement authorities. He said that every person who responsibly decided to undertake a task will be defended until they are found to be at fault in proceedings. Irrespective of the potential results of investigations, he stressed that it is his firm belief that Flórián Farkas has done a lot for the Roma community in Hungary.