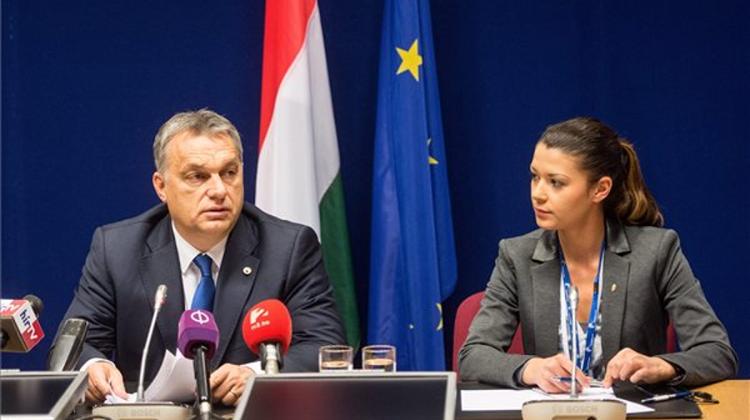 If the European Union has more accomplishments than disagreements within the bloc then it has a future, Prime Minister Viktor Orbán said. If, however, the community is unable to move past its disputes, the EU will require a rethink, the prime minister said in an interview to the Thursday issue of daily Magyar Idők.

The core of the EU is the euro zone and this is the area that needs to achieve more success. The euro zone countries had for years been moving towards deeper integration, but this process has now come to a halt.

“Europe is searching for its place in a changing world,” he said. Orbán said the euro zone’s economic prospects are currently unclear.

“The rational thing to do right now is to root for the euro zone, but we need to wait and see where these countries are headed and where they will end up.”

The prime minister said Europe “has deluded itself into thinking that the time of strong leaders with strong characters, the time of Kohls, Aznars and Sarkozys, is up”.

He said the belief within Europe is that when it comes to strong politicians, “the risks outweigh the benefits because being a leader in the EU does not mean leading a community but rather an institutional system … that will somehow govern the bloc.”

In a time of crisis, the only types of leaders who can help are the bold and confident ones who are able to give clear solutions to problems and are able to carry out these solutions, he said.

Orbán said Europe has been drifting from crisis to crisis since 2008 and has yet to come to the realisation that “the routine running of its institutions” is no longer enough to solve problems because “our environment” has changed completely.

“We have been overrun by the financial crisis, the recession, the massive migration wave, the threat of terrorism, and in every one of these cases Europe took a reactive approach. Not only was it unable to fend off any of these challenges, it couldn’t even predict them.”

The prime minister said that if most of Hungary’s EU partners had agreed with the Hungarian government’s view on the migration crisis from the start then “today there would be a few tens of thousands of refugees in Europe as opposed to a million migrants.”

Orbán said the decision to admit migrants into the EU was a mistake “that can hardly be corrected now”. As regards the rejection of the EU’s migrant quota scheme he said it is a matter of principle whether or not Hungarians could be told by an external party that they “must live with people whom they do not want to live with”.

He said Hungary’s challenging of the scheme is meant to defend national sovereignty. If Hungary’s parliament decides to take in refugees then they will be accepted, but otherwise “there is no way we will allow a quota system to be forced on us by Brussels,” Orbán added.

As regards German Chancellor Angela Merkel, Orbán said she is a “strong leader” with a strong character and “as anyone, we Hungarians have good reason to respect and trust her.” Orbán said what the chancellor lacks is “room for manoeuvre” as she is forced to govern in a coalition.

“The way I see it is that the German and European left are forcing the migration policy onto the German chancellor which she now has to represent,” Orbán said, noting that although the German and Hungarian governments “strongly disagree” on the migrant issue, they are able to uphold their alliance because politicians on both sides are keen on maintaining good relations.

Orbán said early surveys indicate that most of Europe’s migrants will become left-wing voters. “They will identify with the left because then they will not have to deal with any Christian roots. Once they [the migrants] have the necessary amount of people, they will form their own political representation, which, for the same reason, will cooperate with the left.”

The key question is how European politicians, and particularly the politicians of the European People’s Party will respond to this upset, Orbán said.

He said tying the question of migration to the question of EU funds would be a matter of “revenge, blackmail, which no one has the right to do” as the EU’s budget had been agreed upon earlier.

He said when central European countries opened up their markets after forty years of communist rule, western European businesses had “huge advantages” right from the start.

Despite the fact that competition is guaranteed by law, the differences in the amount of capital in western and eastern Europe render true competition an illusion, the prime minister said.

“This is why we receive the amount of funding from the EU that we do.” On the subject of Hungary’s opposition parties, Orbán said that when the left was in power, it demonstrated “what a government that is corrupt to the core is like,” adding that any accusations of corruption coming from the left “by default lack credibility and are ridiculous”.