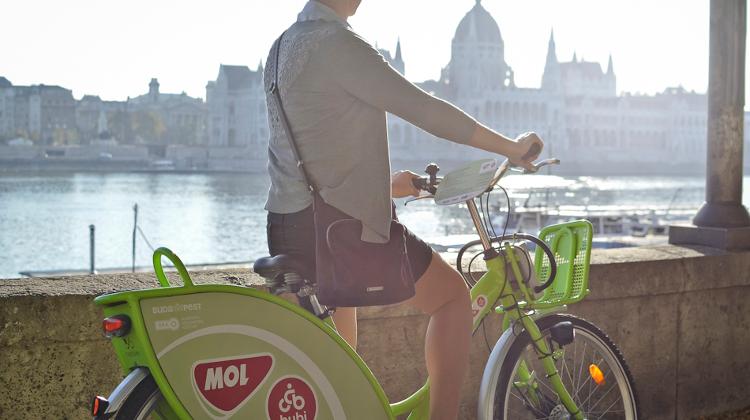 Success of MOL Bubi Public Bike Sharing system of Budapest is beyond expectations! On 5 November 2015 Enikő Pásztor, user of the 1 millionth rent of the system was greeted. In the main season, from April to September an average 3167 bikes were rented per day! Winter operation of the system has just begun on the 15th of November 2015.

Enikő Pásztor was the 1 millionth user of the MOL Bubi Public Bike Sharing system of Budapest! She received a BuBi surprise kit and also a SONY Action Cam Mini from Dr. Kálmán Dabóczy, CEO of BKK and Domokos Szollár from MOL Hungary.

The bike sharing syístem is in operation for more than a year now! Analising data, it can be seen that users with annual or semi-annual passes use the system more times a week.

MOL Bubi has currently 98 docking stations and 1150 bikes, but further developments are planned. Users of MOL Bubi have already preformed over 2 million kilometres! How to use Bubi?

During the wintertime, the full technical checks of the bikes and the necessary repairs will be carried out in order that the original number of the apple-green MOL Bubi bikes could be available again next spring at the docking stations."

Trendy bike sharing system helps to draw attention to the significance of multimodal ways of transport, popularise bike and community transport, and thus contributes to help Budapest to become a more liveable city.