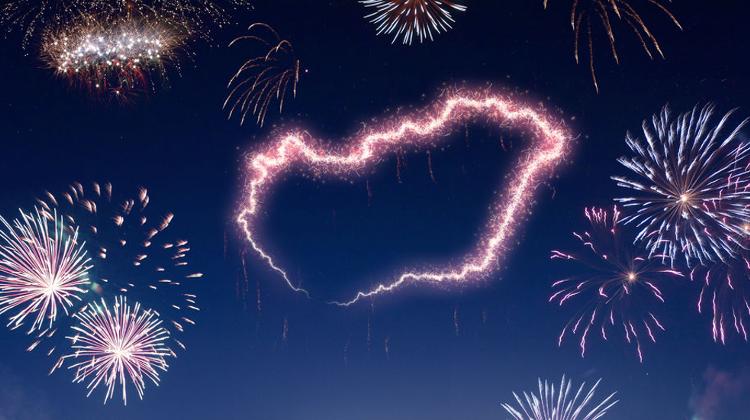 Advent, a time of contemplation, and the Christmas holidays which are usually celebrated within the family, are followed by a night of cheerful company: New Year’s Eve. It is a night of boisterous, carefree celebration with family or friends.

In Hungary no one would be thought discourteous if he or she turned up at the host’s house and brought another six people along, without letting the host know.

On the contrary, the more the merrier. But parties are held not just at home; every restaurant does great business, clubs and organizations celebrate in their meeting rooms, and even the State Opera is transformed into a massive ballroom. There is music and dancing everywhere, lots of laughter, and of course plenty to eat and drink.

The hurly-burly on the Great Pest Ring Road lends New Year’s Eve in Budapest a unique local flavor. From late afternoon to early the next morning, all parking restrictions are removed and traffic regulations waived.

Streets and sidewalks seethe with masked people in party mood who joke with each other and make a dreadful noise with screeching cardboard horns. A relaxed and cheerful mood prevails despite the freezing temperature, and sometimes driving snow.

Sweet and savory for New Year

The revelry, which continues until the early hours of the morning, is interrupted by a moment of silence and remembrance throughout the land. The moment the clock strikes twelve, and before the toast to a happy New Year, the Hungarian national anthem is played on radio and television. Everyone stands and sings the melancholy melody, which at this moment sounds like a prayer: “Send rhe people of Hungary, God, Happiness, Luck, and Blessings … Grant joy once more to the people who long endured shame.”

In Hungary there are special dishes and drinks for New Year -pork brawn and roast sucking pig are always part of New Year celebrations. The latter is usually served with cabbage cooked in dry sparkling wine, or braised cabbage. As in many countries of the world, Hungarians also welcome in the New Year with sparkling wine. The stylish drink is even sold from temporary stalls in the streets. Traditionally, hor weenies with mustard or horseradish, and fresh bread or bread rolls are eaten afterward.

After an eventful New Year’s Eve, many try to ward off a hangover with korhelyleves (Night owl soup,). In some places lentil soup is served early in the morning. Certainly lentils in some form should be eaten on the first day of the year, to prevent you running out of money for the rest of the year — or so custom has it.