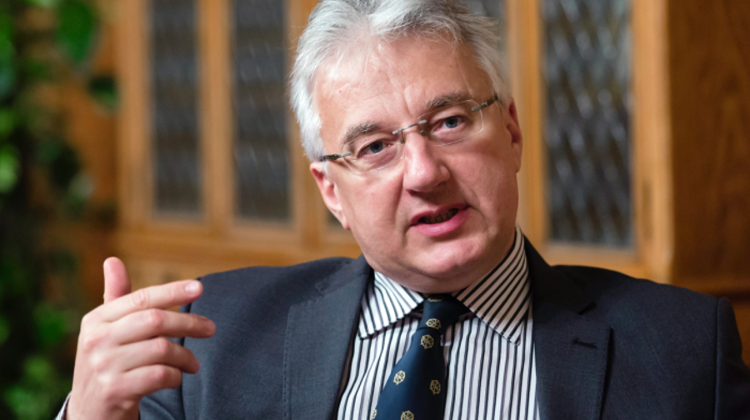 (KDNP Chairman) Zsolt Semjén says 2015 was maybe the most successful year for Hungary’s national politics. The deputy prime mister told this to Kossuth Radio’s “Without borders” (“Határok nélkül”) program.<br>In his assessment of the year and the situation, he said that the national political program which the government initiated five years ago works “without bumps’”.

He cited as an example the Kőrösi Csoma Sándor program, within whose framework one hundred scholarships were awarded to Hungarians living in diaspora where Hungarian lessons and cultural events are being organized on a regular basis. The organizations created “can be the home for every Hungarian”, even for those who moved abroad for a few years to work or learn, he noted.

(Way to look on the bright site, Zsolt! Unfortunately, most Hungarians living abroad are not planning on moving back to Hungary any time soon.-ed.)

He added that it was very important that this initiative be expanded to the Carpathian Basin, too.

The Petőfi Sándor program pertains to Austria, the Czech Republic, because the Hungarian diaspora exists in those places as well, even though we do not call it diaspora.

Zsolt Semjén called the launch of the thematic years very significant, because these “direct attention to special areas and focuses financial resources there as well”.

(Yeah, like the coffers of various foundations founded by Republican US Congressmen-ed.).

He said that he first “fine tuning” was when they placed emphasis on technical training, because it is important to Hungary not only culturally, but materially as well for one to be able to remain in the land of one’s birth.

(What in heaven’s name are you talking about, Zsolt? -ed.)

This is also possible if “not only the Hungarian national anthem can be sung and schools exist, but if they can also make a living”.

He stated that an initiative without precedent had been launched in Vojvodina: they are making HUF 50 billion (USD 175 million) available for economic development, partly in the form of non-refundable grants and partly in the form of very favorable loans. The program helps to maintain (the region’s Hungarian nature) while making economic development possible. The development seriously supports Hungarian businesses, and ties Serbian businesses to Hungary, he added.

(Saw that coming a mile away. HUF 50 billion is roughly equivalent to what Hungary’s nationalized hospitals owed suppliers and contractors as of the end of 2o15. Wouldn’t this money be better spent settling these arrears?-ed.)

The deputy prime minister said that Transcarpathia wished to participate in a similar economic developmental capital injection. In Ukraine “partly war and partly anarchy” reign, and for this reason the state cannot have a relationship with Hungary that resembles the Hungarian-Serbian one. In Transcarpathia “the greatest problem is insecurity” and for this reason the next large economic development is being planned there, he emphasized.

(Wait a minute, didn’t he just say that war and anarchy reign in Ukraine? Doesn’t matter. The point is that squandering billions of Hungarian taxpayer money on neighboring countries is a good thing so long as Hungarian nationals are living there.-ed)

About Slovakia and Romania, Zsolt Semjén said that since these countries are members of the European Union, they possess other resources, which is the reason the Hungarian government is concentrating on giving support primarily to Serbia and the Ukraine.

(It’s a good thing for Serbia and Ukraine that money grows on trees in Hungary.-ed.)

The deputy prime minister said that “Slovakian-Hungarian economic connections are soaring” in the highlands of Slovakia (Felvidék), and that within the framework of the Visegrad 4, political relations are better than ever. He said that it was a “historical thing” that Slovak soldiers came to help protect the Hungarian border. All of this “paves the way” for advancing national questions in time, he declared, adding that things will be easier if the Hungarian Community Party (Magyar Közösség Pártja) enters parliament in Bratislava next March.

(If Slovakia is already willing to send soldiers to defend Hungary’s southern borders, then what is the significance of a Hungarian political party entering the Slovak parliament? And isn’t this an argument for EU member states cooperating on the mutual defense of its external borders in a transnational manner?-ed.)

The Hungarian-Romania relationship at the same time has deteriorated on the level of international relations between states, as well as between the Romanian political elite and the Transylvanian Hungarians. Here “unfortunately we have to report backward steps” said Zsolt Semjén, who believes the backsliding took place during the left-wing government of Victor Ponta when they “deliberately destroyed” Hungarian-Romania relations, destroying everything that was built up under the previous governments.

(When a member of the second Fidesz government smuggled the remains of a convicted war criminal into Romania for reburial in 2011, was that building or destroying Hungarian-Romanian relations?-ed.)

The deputy prime minister said that if “the center-right finally got itself together” in Romania, then it would make possible cooperation between Hungary and Romania, and the representation of Hungarian interests would be more pronounced. He added that the Romanian Hungarian Democratic Alliance (RMDSZ) was always a believer in compromise, and that the goal of the national politics was to “consolidate” the Hungarian political organizations of the given national community.

According to his words, should RMDSZ fall out of the Bucharest parliament, there is a danger of Hungarian intellectuals being integrated into Romanian parties. For this reason he believes it is a “national command’ that RMDSZ remain the strongest Hungarian organization capable of entering parliament as determined by the Transylvanian Hungarians in earlier elections.

(Why should Hungarian foreign policy towards a neighboring country depend on the political orientation of the government? Or whether a Hungarian political party is in parliament or not?-ed.)