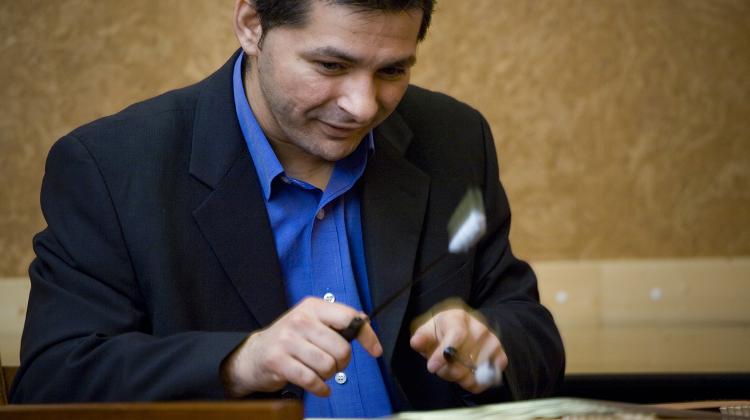 Calling all English speaking jazz lovers in Budapest to The Harmonia Jazz Workshop at the Budapest Jazz Club with a kick-off at 20.00 on Friday , 5th February 2016 proudly presents Viktor Tóth’s Arura Trio.

Alto-sax player Viktor Tóth one of the great sensations of the 2007 Budapest Jazz Festival, is the most open minded of the young jazzmen in Hungary. In January this year he totally brought the house down in London’s famous 606 Club.

He has played with most of the experimental groups in Hungary and recorded two albums with Hamid Drake, the first of which won the critics’ prize for the best Hungarian jazz album of 2007. In this outfit he teams up with the No.1 exponent of the cimbalom, Miklós Lukács.

The cimbalom looks like a small piano with the lid off, and the strings are hit by mallets. It’s one of the most characteristic folk instruments of Hungarian and Romanian gypsies and it’s hardly ever used in a jazz context.

The trio is completed by György Orbán, one of the most original young bassists in Hungary, a country teaming with virtuosos on his instrument. He first caught public attention as a member of the legendary Szakcsi New Gypsy Jazz outfit.

There is no compulsion to eat or drink but there is a well stocked bar with also cocktails made to order at non-extortionate prices. For food, we're pleased to report that the BJC Bistro offers several Hungarian and international food specialities to enhance your enjoyment of great jazz.