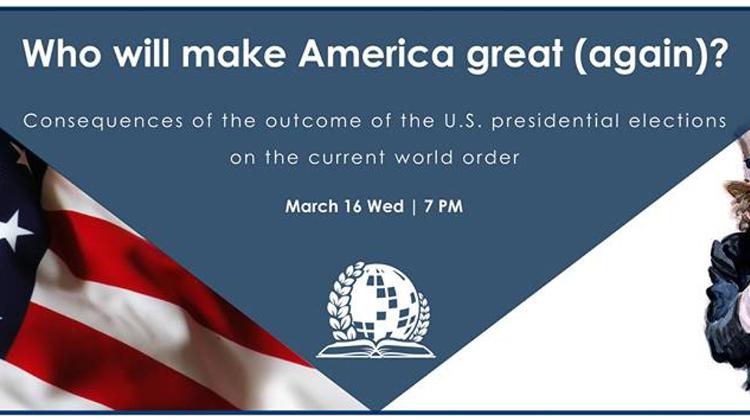 Consequences of the outcome of the U.S. presidential elections on the current world order. The International Diplomatic Student Association would like to invite you to its second public event in the spring semester of 2016 which will be a panel discussion focusing on the biggest question of the upcoming U.S. presidential election: Who will make America great ’again’?

The aim of the discussion is to examine the election’s possible outcomes and its consequences on the current world order while highlighting the key strategies of the candidates’ campaign.

The basic idea of the discussion can be best illustrated with a passage from George Friedman’s ’The next decade’:

„The American President is the most important political leader in the world. The reason is simple: he governs a nation whose economic and military policies shape the lives of people in every country on every continent.

The President can and does order invasions, embargos, and sanctions.

The economic policies he shapes will resonate in billions of lives, perhaps over many generations. During the next decade, who the president is and what he (or she) chooses to do will often affect the lives of non-Americans more than the decisions of their own governments.”

Members of the panel discussion

Please kindly note that registration is required to attend at the event: http://goo.gl/forms/AMDTNWmWKn