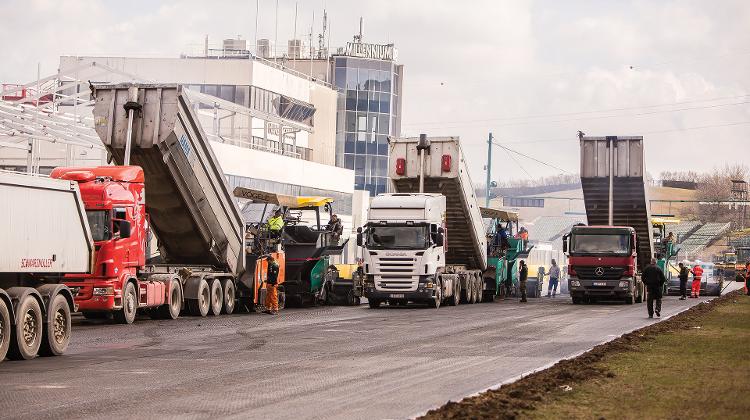 The fact that the Formula 1 race was being organised for the fourth time already in 1989, the year of the political turn, clearly tells what a remarkable pole-position Hungary used to hold among the countries of the former Eastern bloc. The Hungaroring is celebrating its 30th birthday this year and it’s as popular as always, with excellent prospects.

The Hungaroring is back into 100% state ownership this year. The state, which already owned 80% of the Hungaroring Sport Zrt., paid out the remaining minority owners at the end of last year. This means that the regular conflicts about Hungaroring’s funding with the government are over once and for all.

The last major such conflict happened in 2010, when the state – surely still under the shock of just avoiding state bankruptcy – seriously questioned its financial engagement in the Hungaroring.

2010 was the year of change for the Hungaroring

Still in the same year, when the power shifted from the Socialists to the still reigning Fidesz led by Viktor Orbán, the company operating the track in Mogyoród, Hungaroring Sport Zrt., also had a change in leadership. Zsolt Gyulay, the top athlete, became the new general director of the largest sports real estate in the country with its 130 hectares.

Where he used to fight for Hungary’s reputation abroad as a kayak racer, the Olympic gold winner (1988 in Seoul) now had to put his skills to use for his homeland on the motor-racing front. Specifically he had to take care of nothing less than managing the problem child Hungaroring out of the red for the first time in its history.

“In order to achieve that, we started to manage the economics of our company on a complete different basis,” Gyulay told The Budapest Times remembering the beginning of his consolidation efforts.

Under his leadership the new management made sure among other things that the company operating the Hungaroring doesn’t function solely as the provider of funds, but that all revenues also hit the books of the company. Up until then the usual practice was that Hungaroring Sport Zrt. was bearing all the costs of the track, but a large part of the revenues ended up in the cash registers of external companies.

This unique arrangement repeatedly led to financial imbalances. “When I started working here we even had a problem to pay our invoices,” Gyulay recalls of the hard times at the beginning.

Similarly to the new holders of power in the Hungarian Parliament, who were not squeamish about the methods employed to restore the state balance to order in 2010, Gyulay and his team started the work with Hungaroring in an equally firm and dynamic way.

The results were soon seen: already in 2012, the second full year under the new management, Hungaroring Sport Zrt. was making a profit. “The state can be a good owner too,” Gyulay emphasised at this point.

The quick turnaround was made possible especially thanks to a better management of costs and incomes. In addition, they started to use the track and adjoining buildings and areas in a more intensive way. In just a few years they succeeded to double the revenues earned by using the race track as compared to 2010.

In the meantime the utilisation of the track reached capacity. “The race track is used on 210 days of the year, much more is not really possible taking the Hungarian climate and the restrictions due to the Formula One race into account,” Gyulay says. On the other hand, the current condition of the buildings and existing infrastructure prevents their further utilisation.
Thanks to the business success of the new management the state was able to completely move back from the funding of the Hungaroring operator’s operative business in the meantime. The state only pays for the considerable royalties that are due to the Formula One Group for organising the annual F1 race.

“Considering the numerous positive effects the race has on the national economy, this investment is a very lucrative business for the state,” Gyulay highlights.

Debt-free into its fourth decade

The new manager led the company in such a successful way that it was even in the situation to perform a complete renovation – the first ever since the Hungaroring opened – of the asphalt surfaces, which began last year and was finished only very recently, completely from its own resources. This was an investment amounting to more than half a billion forints.

Moreover, without considering that the new management accomplished that the company does not have to rely on the state any more, Hungaroring Sport Zrt. can celebrate its 30th anniversary with zero debt: this year the company will be able to pay off the last instalment of a huge loan.

“These old debts have seriously limited our development options up until now,” Gyulay says. The loan was taken in 2003 to finance the last large reconstruction works. Among other things the Millennium Tower was built during these works, and the length of the track from start to finish was prolonged by 202 metres, giving a total 4383 metres. There were additional renovations to the boxes and the main building as well. Since then not much has happened apart from the aforementioned concrete work.

“Especially the grandstands are almost in the same condition as they were in 1986, so that’s not a very good condition,” Gyulay says. “Up until now we were only able to make partial reparations. The same is true for the electrical, gas and water networks. However, we can’t go on like that anymore. We need complete renovations.”

Basic renovation of the buildings

It’s a good thing that the state is on the same page with this. So they already decided last year to proceed with a complete renovation of the parts of the Hungaroring that still need to be renewed. Chances are good that this project can be started in the first debt-free year, namely the upcoming year.

The plans are being worked on. After this the old buildings around the home stretch will be replaced by an ultramodern real-estate complex, which will not only house the previous functions but will also contain rooms for new business opportunities. Thanks to these the operator of the Hungaroring will be able to generate further income.

Progress is already quite good on the diversification of income. “While Formula One used to generate about 95% of our incomes in 2010, in the meantime it ‘only’ accounts for 80%,” Gyulay says. So around one fifth of all income is already earned from other motor sport activities or company events.

However, for the moment this is already the limit: “With the currently available real estate park we are not able to make much more than that.” So the replacement of the current real estate park by modern new buildings does not only serve the satisfaction of the audience, it’s also necessary for business reasons, since it will create new utilisation possibilities.

There will be a modern conference centre built, for example, and they are considering building a museum about the history of Hungary as an automotive manufacturing location presenting its current leading lights: Audi, Mercedes, Opel and Suzuki.

“We can imagine becoming a sort of showroom for Hungary as a location for automotive industry,” Gyulay says of the future. “Our visitors should be able to get something to see here on 365 days of the year and therefore they should have a reason to visit us.

“The Hungaroring shall become an automobile centre and the heart of the Hungarian automotive industry. We hope that this large-scale investment can be started at the latest in 2017.”

Currently there is no final decision but the situation is promising, especially considering the current ownership structure.

“More than only a Formula One track”

Considering the utilisation by international competitions there is no reason to complain at the moment. Besides the great Formula One run from July 22-24 there are another three competitions taking place on the track: the World Touring Car Championship WTCC (April 22-24), the European Truck Racing Championship ETRC (August 26-28) and the German Touring Car Masters DTM (September 23-25).

The presence of the two large car manufacturers Audi and Mercedes in Hungary is already providing a positive back wind for the DTM, but so does the fact that BMW also gets a lot of production done here. It’s no wonder that for the top managers of these three car companies, which are substantial for the DTM, the championship taking place at the Hungaroring is becoming a more and more important meeting point.

The same is true for their partners, of course. It goes without saying that both at the DTM and the F1 weekend many top representatives of the government are present as well. “Good business deals can be made not only at football fields or golf courses,” Gyulay says.

In addition to the four competitions mentioned above, Hungaroring Sport Zrt. organises two external events as well: the large Formula One presentation on May 1 in Budapest city centre along the Danube, and the Red Bull Air Race on the August 20 national holiday. “We are very satisfied with these four internal and two external motorsport events at the moment,” Gyulay says.

For the moment he is only flirting with the motorbike grand prix: “This competition attracts a completely different audience and for that reason it could be interesting for us.” Whatever, the Hungaroring is already doing much more than merely providing the venue for the annual grand prix. “The Hungaroring and the Formula One track are not synonyms,” Gyulay says as criticism of the oft-encountered reduction of his premises to only an F1 racing circuit.

Always keeping an eye on the economic ratio

In principle it takes care and caution to pick which races to bring to Budapest. It always needs to be considered whether a race could generate enough ticket revenue. The aim is not only to bring as many races to the Hungaroring as possible, they should also be viable.

“When you organise too many races it can happen easily that at the end you will be under a lot of pressure to generate revenues,” Gyulay says. For him it’s not an option to run to the government for rescue because he has miscalculated something.

Investments also carry the danger of miscalculation, so according to his point of view they should also be compared against income potential in a very realistic way. There are warning examples, such as the Formula One racing tracks in Turkey, and the German Nürburgring.

However, the Hungaroring is quite far away from such a fate, and things are getting better and better. As the host of 30 Formula One races without interruption, it’s in the worldwide top three of F1 racing circuits alongside Monte Carlo and Monza.

In general, Budapest has an excellent reputation in F1 circles. “Our guests like Budapest and the Hungaroring. Our circuit has an absolutely positive image,” Gyulay states proudly.

The characteristics of the circuit itself are responsible for its popularity, plus its proximity to the internationally beloved city of Budapest and the timing of the race in the middle of the holiday season. The technical knowledge of the expert Hungarian employees is highly appreciated, to the extent that they receive invitations from around the world to share their knowhow.

Due to all these circumstances, but also to the already mentioned calming state of the ownership, it’s no wonder that the co-operation with the Formula One Group has improved a lot in the meantime and they are planning for the long term. For the moment they have a contract with Hungaroring until 2021. Gyulay is sure that this can be extended this year until 2026.

With such a secure planning background, the day of the ground-breaking ceremony for the planned large-scale investments should not be far away.