Hungary’s PM: Orbán: ‘I Am Not A Wealthy Man’ 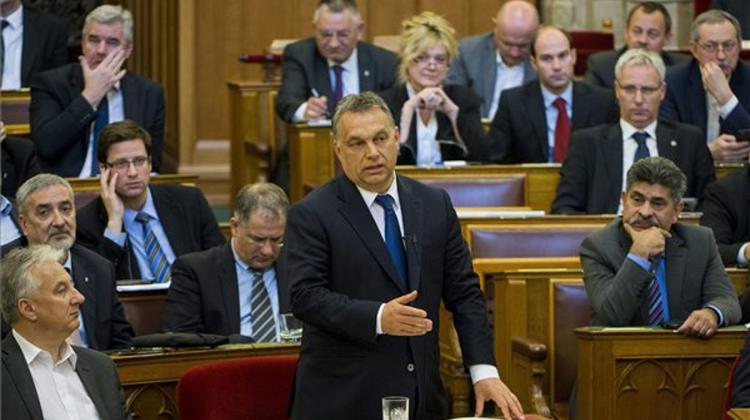 Prime Minister Viktor Orbán said he was not a wealthy man and he did not have a “strawman”, in response to a question by Jobbik in parliament. “I never had a strawman, nor do I have one now or will I ever have one in the future,” Orbán said, responding to a question on whether Lőrinc Mészáros, the mayor of his native Felcsút, was acting as his “front”. Orbán added that he had been a Member of Parliament since 1990 and “has never been a wealthy man, nor will he ever be one”.

Addressing the prime minister, Gábor Vona, the leader of the radical nationalist Jobbik party, asked how people in Orbán’s “immediate surroundings” gained wealth, in connection with media mogul Andy Vajna, Orbán’s unofficial advisor Árpád Habony and Mészáros, who was earlier a gas repairman. Orbán said all lawmakers must file an official report on their wealth.

Anyone who questions the validity of that report is making criminal accusations, he said, adding that this is not fair. He said that in 1990 he had to choose between a career in business or politics and he chose the latter, bearing the consequences to this day.

András Schiffer, co-leader of the opposition LMP party, asked Orbán whether he thought it was a good idea to raise the salary cap for executives of state-owned companies.

He said while pre-2010 Fidesz had waged a war on blatantly high state salaries, now they are proposing to raise the monthly salary cap to 3-5 million forints (EUR 9600-16,000) for company heads and resubmit another bill to raise salaries for central bank executives.

Orbán said he thought the changes made to their pay grades were fair and even the State Audit Office (ÁSZ) had made it clear that they must create a clear pay structure in order to take steps against excessive premiums and bonuses.