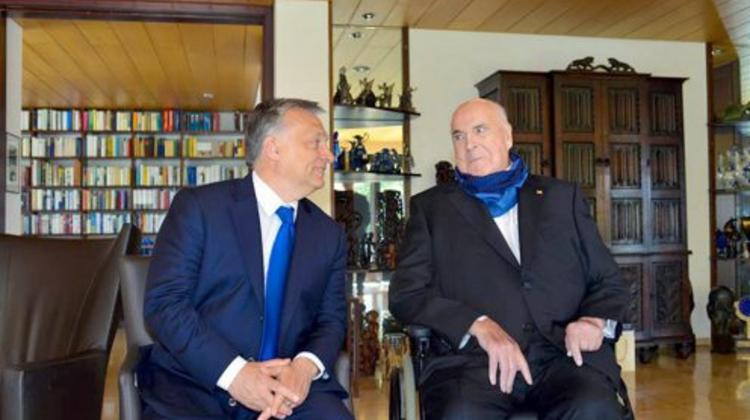 In a joint statement released after the Prime Minister of Hungary visited the former German Chancellor in his home in Germany on Tuesday, Viktor Orbán and Helmut Kohl stated that Europe cannot be a new home to the millions of people in need around the world.

The statement, which was released simultaneously by the Hungarian Embassy in Berlin and Helmut Kohl’s office, emphatically asserts that “The migrant flow is a historic challenge of existential significance”, both for the millions in need and for the future of Europe. However, it continues, Europe can only give temporary refuge or a new home to a small proportion of those affected.

The communiqué states that Europe, together with the international community, must provide assistance in affected regions, to offer a future to the largest possible number of people in their own home countries. Contrary to earlier press reports, in the statement Helmut Kohl and Viktor Orbán see no conflict between their views and the objectives of German Chancellor Angela Merkel, and they fully agree with her ultimate goals.

Humanitarian considerations demand that the best solution must be found for millions of people on an issue of existential significance. The issue at stake is crucial for the inhabitants of Europe and elsewhere in the world: the positive future of Europe and world peace. Angela Merkel’s efforts also point in this direction, the communiqué states.

With regard to recent press reports, Helmut Kohl and Viktor Orbán stated in no uncertain terms that “the fabrication of political differences” on the important issue of the management of the migrant crisis and the fate of millions does not help the cause and the individuals concerned. Furthermore, the fevered speculation arising from this fabrication of differences is incomprehensible and undignified in relation to the complexity and importance of the refugee question.

The statement adds that Prime Minister Viktor Orbán visited Helmut Kohl as part of his two-day visit to Germany. The two politicians have known each other for many years, and Mr. Kohl values the opportunity to meet Mr. Orbán and hear his assessment of the situation. For Mr. Orbán visiting Helmut Kohl was not only an opportunity to exchange views; it was also an expression of his most profound respect for a politician who did a huge amount for Germany and Europe, and upon whom Hungary has always been able to rely in its freedom fight, in its EU accession process after 1989/1990, and in its general transformation.

Mr. Orbán also came with a special gift: he presented a copy of the Hungarian-language edition of Mr. Kohl’s 2014 book “Out of Concern for Europe”. This version, which will be released in the next few days, features an updated foreword by Mr. Kohl and an introduction by Mr. Orbán. For Helmut Kohl this book is a kind of “bequest to European politics”; the fact that in addition to this he makes statements on the cause of Europe – despite his frail health – can only be a sign of his intensifying concern for Europe.

Accordingly, the main topic of the meeting was Europe. Both men were of the view that Europe is going through one of its most difficult periods since 1945, and it is their abiding, shared conviction that the fate of Europe’s peoples depends on the continent’s political unification. They both underlined that if we wish to preserve peace and freedom on a long-term basis, and if Europe wants to assume responsibility in the world, there is no alternative to a politically united Europe.

Europe must urgently remember that a united continent is crucial for the peoples of Europe and for world peace, and the unification of Europe can only be achieved together, or not at all. In this spirit EU Member States and institutions must pull together in the same direction with even greater force, and must act firmly and decisively.

Helmut Kohl highlighted that this is an important precondition for the community of Europe successfully rising to all its challenges: from the fight against international terrorism and maintaining the stability of the euro and the eurozone, to a common stance on migration and Europe-wide agreement for resolution of the problem.

Mr. Orbán again reassured the former Chancellor that Hungary naturally wishes to provide a contribution to the positive future of a united Europe, and will take an active part in joint European decisions. The communiqué states that it was in this spirit that the Hungarian prime minister referred his host to the “Schengen 2.0” ten-point plan, with which he wishes to contribute to the European debate on resolution of the refugee issue, and in favour of which he is arguing in Germany this week.