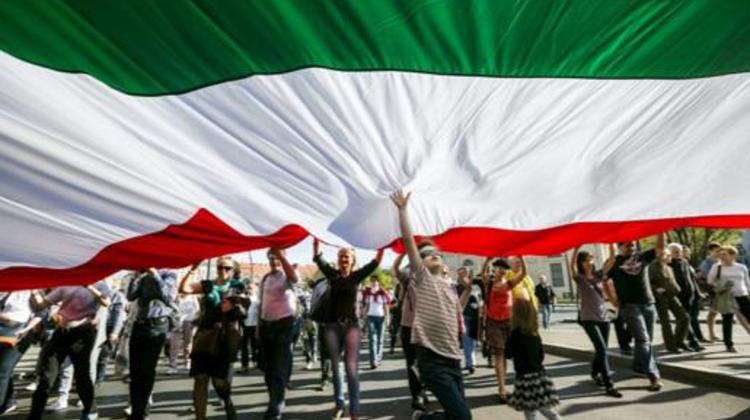 A while back Medián conducted a survey on anti-Semitism in Hungary. It just made its findings public. The document is almost forty pages long, full of tables and graphs, and defies being summarized in a few paragraphs. Here I will concentrate on a couple of areas of the study I personally found interesting and/or significant.

The research project, which is available online, was commissioned by the Tett és Védelem Alapítvány (Action and Defense Foundation), which is connected to the Egységes Magyarország Izraelita Hitközség (EMIH), itself closely linked to the Chabad-Lubavitch branch of Hasidism. The study, titled Antiszemita előítéletesség a mai magyar társadalomban (Anti-Semitic Prejudice in Present Hungarian Society), was written by Endre Hann and Dániel Róna.

What first struck me was that although 32% of the Hungarians surveyed hold strong or moderate anti-Semitic attitudes, Hungarians on the whole pay scant attention to events related to the Jewish community. Almost 70% of the people knew about the erection of the controversial monument commemorating the German occupation of Hungary in March 1944, but only 5% knew anything about the issues involved. As for the size of the Hungarian Jewry, 43% of Hungarians don’t have even a rough idea of the number of people of Jewish ancestry and only 8% got the number more or less right.

Hann and Róna distinguish between cognitive and affective anti-Semitism. In the first category we find the usual assertions leveled against Jews in general. Such as the belief that there is a secret Jewish conspiracy (31%). Of those surveyed 37% think that Jewish intellectuals have a predominant position in the media and culture in general. A rather large minority (20%) think that Hungarian Jews should emigrate or that one ought to restrict the number of Jews in certain professions. That one in five Hungarians hold such extreme views is cause for alarm about the state of Hungarian society.

I personally think that affective anti-Semitism is more intriguing, especially since it rose significantly between 2003 and 2014. We must keep in mind that Medián has been doing surveys on the topic for a number of years. In 2003 only 9% of the population felt antipathy toward Jews. That number didn’t change until 2010, when Medián measured an almost unbelievable 28%. Since then this aversion toward Jewish Hungarians has subsided somewhat, but today it is still 23%. So, what happened in 2010? I just heard Endre Hann today on ATV’s Start where he expressed his belief that Jobbik’s spectacular success at the 2010 election had something to do with the sudden jump. He thinks that with Jobbik’s appearance in parliament this kind of anti-Semitism gained acceptance.

Hann is most likely right, but from another chart it looks as if Hungarians just don’t like “others.” It matters not whether it was in 2006 or 2014. When asked about their attitudes toward different ethnic groups Hungarians disliked all of them to a greater or lesser degree. Of course, they hate Gypsies the most, but Arabs and the Chinese are not far behind. Here the Jews actually fared relatively well. They were tolerated just a little less than Germans who settled in Hungary at the beginning of the eighteenth century.

Even more explicit were the answers to the question “Would you agree to having [a member of a group] move next door?” The most rejected are the skinheads (76%), followed by Gypsies (73%), but gays are not far behind (61%). Arabs and the Chinese are liked even less than blacks (59%), closely followed by Romanians. In case any American thinks he would be a welcome neighbor in Hungary, he is wrong. Thirty-three percent of Hungarians wouldn’t want him anywhere close. And if you think that it is better to be a Transylvanian Hungarian in Hungary you are wrong again.

Thirty-seven percent of Hungarians wouldn’t want their brethren so favored by the Orbán government as their neighbors. Given the ethnic nationalist government, this is an interesting finding. In this group Jews are somewhere in the middle of the pack, being rejected by 44% of the respondents. In 2013 that figure was 38%. So, regardless of who the “others” are, xenophobia is a powerful force in Hungary, which most likely also has an impact on the extent of anti-Semitism.

Medián tried to answer the question: “Who are the anti-Semites in Hungary?” The results are surprising. The common wisdom is that anti-Semites are numerous among poorer people whose life hasn’t worked out the way they hoped. And indeed, several international surveys attest to this belief.

But this isn’t true in the Hungarian context. Medián’s surveys of the last two years show no significant correlation between anti-Semitism and educational attainment or social status. In fact, when Medián distinguished between groups according to income level, the financially best-off group had the greatest number of anti-Semites. One would also think that inhabitants of villages or small towns are more prone to hold anti-Semitic views, but Medián found that there are relatively more anti-Semites in Budapest and other larger cities.

This single statistic explains why Jobbik’s political leadership has been so singularly unsuccessful at transforming the party into a middle-of-the-road conservative party. Followers of parties on the left predictably scored under the national average. Nonetheless, there are a few oddities. Among Együtt-PM supporters 23% are strong anti-Semites. Among LMP sympathizers there are no strong anti-Semites but 23% are moderately anti-Semitic. The least affected party seems to be DK, with 5% strong and 10% moderate anti-Semites.

I could cover only a fraction of the study results today, but I will find time to return to the subject sometime in the future.