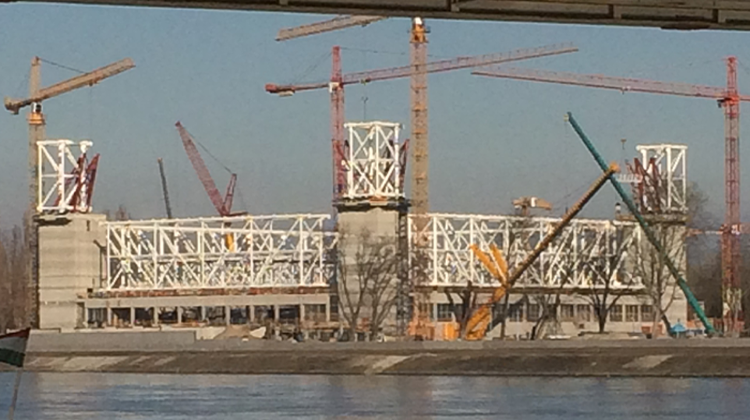 According to Hungarian investigative journalism portal Átlátszó.hu, the 2017 FINA World Championships to be hosted in Budapest in 2017 will cost Hungarian taxpayers at least HUF 90 billion (USD 323 million), of which HUF 52 billion (USD 192 million) is to be spent this year alone.

In February, the Beacon reported that hosting the FINA swimming event will cost Hungarian and European taxpayers some HUF 86 billion (USD 312 million) according to latest estimates, or 3.5 times original estimates and roughly USD 31 for every man, woman and child living in Hungary.

Átlátszó reports that not all of that money will be spent on building swimming pools. Other expenses include improvements to local recreation areas (like the Dagály beach), infrastructural development, organizing events, construction projects outside Budapest, obtaining rights to host the championship and building docks.

The largest lump sum expense is the construction of a HUF 47 billion (USD 170 million) indoor swimming facility just north of the Árpád Bridge.

Last year, nol.hu reported that Market Építő Zrt., a company owned by confidante of the prime minister István Garancsi (and suspected straw man), had been awarded a no-bid contract to build the USD 170 million facility even before the government decision to that effect had been published in the national gazette.

When Orbán announced Hungary would be host, the government allocated HUF 14 billion to the project. This was in addition to the HUF 8 billion already allocated for the construction of a more modest facility in anticipation of hosting the junior world swimming championship in 2017.

However, within weeks this amount increased to HUF 49 billion (USD 178 million). The project was awarded to a company owned by Fidesz oligarch István Garancsi without competing bids being solicited. In fact, the contract was reportedly signed before the decision to do so even appeared in the government gazette.

The ground-breaking ceremony took place on May 15th without announcing who the contractor would be. Not until the middle of June was it announced that MNV Zrt. had awarded a contract in the amount of HUF 36.63 billion (plus value added tax) to Market Zrt. whose majority owner is István Garancsi, having acquired it from the Wallis group the previous month without soliciting competing bids. Online investigative reporting website atlatszo.hu notes that the project approaches the company’s total revenues for 2014.

The 15,000-square meter building designed by Marcel Ferencz features two 50-meter swimming pools, a 25-meter diving pool and a 12-meter training pool. It will feature 5000 permanent seats to be temporarily expanded by an additional 14,000 seats.

To get a sense of just how “fast tracked” the investment was, this is what Orbán had to say at the cornerstone setting ceremony.

“In under two years must be built here in the area of the Dagály that water something, whose name we must determine: palace gives one an impression that is too elegant and luxurious, complex is not a Hungarian word. So, for the time being we do not know what we are building, because it is too grandiose for a swimming pool; a water center is being built here, let’s leave it at that for now.”

At the end of May the government established a new budget framework for the project—HUF 49 billion, or 3.5 times that of the original HUF 14 billion. The new amount agreed with the gross amount of the contract concluded with Market Zrt.

In June 2015, the right to host the event cost HUF 1.5 billion, HUF 833 million of which was to come from the reserve for extraordinary expenses.

The sky’s the limit

On Wednesday the Budapest city council approved the expenditure of HUF 18.1 billion (USD 66.5 million) on expenses related to hosting the 2017 World Swimming Championship, of which the city itself is to contribute HUF 9.3 billion towards the cost of renovating the left bank of the Danube and related improvements as well as the construction of bicycle lanes. The proposed improvements increase the total cost of hosting the event to HUF 86 billion.

Daily online napi.hu writes that “this project has been a part of the capital city’s plans for a long time whose realization has been moved up because of the world championship—furthermore the local government need only contribute a minimal amount” without saying what that amount might be or how the envisioned improvements could possibly cost HUF 18.1 billion (USD 65 million).

(The online daily, which, along with portfolio.hu and index.hu is owned by FHB Bank owner Dr. Zoltán Spéder, has a knack for breaking big stories and putting a positive spin on them, thereby setting the mood for the rest of Hungary’s “copy-paste” media establishment-ed.)

According to the article it includes building a pedestrian and bicycle lane along the length of the quay along the Pest side of the Danube, as well as the cost of installing public utilities and roads on nearby Margit Island “whose Hajós Alfréd Uszoda will host the water polo matches, and for this reason it is necessary to undertake improvements that have been planned for a while”. According to napi.hu, the infrastructural improvements on Margit Island are to cost HUF 5.3 billion but that “in addition to this another HUF 2.4 billion is to be spent renovating the island”, which reportedly includes “landscaping and security technology”. An additional HUF 541 million (USD 2 million) is to be spent on new docking facilities to accommodate boats ferrying contestants, guests and “VIPs” between the Dagály and Margit Island.

Napi.hu notes parenthetically that “it’s another question whether adequate boats exist for this” but does not think to ask why it is necessary to hold the water polo event at a separate facility on an island in the middle of the Danube some 3 km away from the world-class facility that is being built just north of the Árpad bridge.

The daily online reports that an additional HUF 3.7 billion (USD 1.3 million) is to be spent repairing city roads, including the Váci út, the Hungária körút and the Árpád bridge. While Budapest residents will be pleased to learn that Budapest’s busiest four-lane road is to be renovated, it is hard to know how they will react to the elimination of one of the four lanes between the Árpad bridge and the City Park to accommodate bicycle lanes.