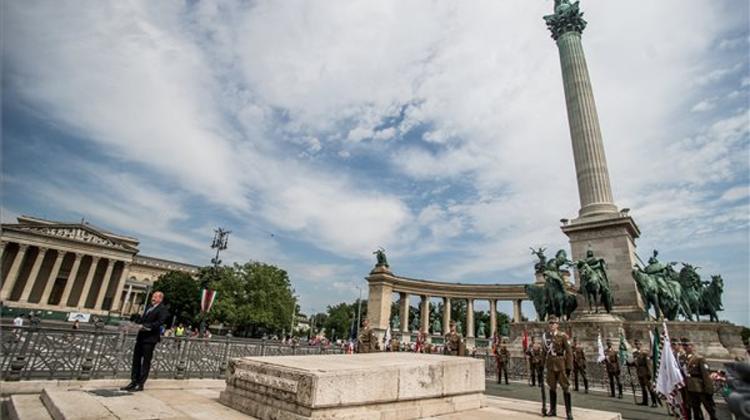 Ceremonies were held throughout the country on Sunday to commemorate all Hungarian soldiers who died for their homeland. Addressing a commemorative event in Vámosújfalu in north-eastern Hungary, Parliamentary Speaker László Kövér said the Hungarian heroes who sacrificed their lives over the past millennium did it not just to defend Hungary but all of Europe.

Kövér said the best way Hungarians today can honour the heroes of the past is by working hard to strengthen everything they had fought so hard for: a free, democratic and sovereign Hungary and a self-conscious, united nation.

The house speaker said it was also a duty of this generation to strengthen ties among Hungarians worldwide. He said Hungarians today must face “forces which envision a future for Hungary and Europe that is not governed by democracy, but ... by bureaucrats who were not elected by anyone”.

He said that unlike the heroes of the past, Hungarians today will not be alone in their struggles, as many European nations are now realising the dangers that lie ahead for Europe. Speaking at a ceremony in Budapest’s Heroes’ Square, Defence Minister István Simicskó said few out of the 200 states in existence today can say that they have been standing for a thousand years.

He said Hungarians living in the Carpathian Basin continuously had to fight for their freedom and independence, adding that the struggles came with many sacrifices. Hungary’s more than one thousand years of statehood show that “the sacrifices of our heroes were not in vain”, the minister said.

Simicskó said Hungary’s armed forces were always there to help the people, whether it was during floods, the red sludge catastrophe or more recently when they had to protect the country from a mass migrant inflow. The minister and other government officials laid wreaths on the heroes’ memorial stone at the square.

Parliament declared the last Sunday in May a national day for Hungary’s Heroes in 2001, partly reviving a 1917 law under which all towns and cities were obliged to erect monuments to soldiers who died in WWI.