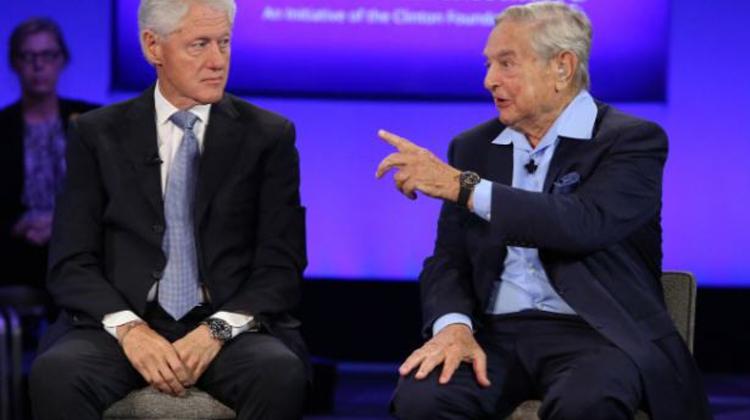 I’m sure that Viktor Orbán harbors ill feelings toward Bill and Hillary Clinton–and that’s probably putting it mildly. Hillary Clinton, when Secretary of State, wrote a letter to him a few days before the parliamentary vote on the new constitution. In it Clinton expressed her regret that her talk with Orbán in June of 2011 and “the constructive comments offered by the U.S. government … have not led to a serious reconsideration of [the] laws” included in the new constitution.

The Obama administration was obviously not happy with Viktor Orbán’s illiberal state. It is worth recalling that, although Barack Obama wrote the usual congratulatory letter to Viktor Orbán on his “strong showing in the April parliamentary elections” in 2014, he added: “It is important that the United States and Europe stand together for democratic principles, particularly in a time in which the peace and security of Europe is being tested.

As we work with Ukraine to instill rule of law, transparency, respect for individual liberty, and a system of checks and balances, we must remain dedicated to the same ideals at home. I hope you will use your new term to recommit yourself to building Hungary’s democratic heritage.” As I pointed out at the time, the Hungarian prime minister’s office, instead of translating the letter, merely summarized it. Naturally, these crucial sentences were left out of the summary.

A few months later, in September 2014, former President Bill Clinton, on The Daily Show with Jon Stewart, said that “there’s the authoritarian capitalism model which is Russia and in a different way China, and it has some appeal. Like the Hungarian Prime Minister – they owe a lot to America; he just said he liked authoritarian capitalism, just saying ‘I don’t ever want to have to leave power’ – usually those guys want to stay forever and make money. And there’s the democracy model …”
This was not an off-the-cuff remark. A few days earlier he said essentially the same thing in an interview with James Bennet in the Atlantic Magazine. He talked about different political models, among which “there is a contest here in the world today….

There’s autocratic governments trying to take advantage of market opportunities—what [Hungarian Prime Minister] Viktor Orbán embraced the other day.” Clinton was obviously familiar with the Hungarian prime minister’s by now infamous speech, described in a footnote as “a headline-grabbing speech,” calling for Hungary to abandon its “liberal methods and principles of organizing a society, as well as the liberal way to look at the world.” At about the same time President Obama, talking about countries from Russia to China to Venezuela which vilify legitimate dissent, included Hungary among them.

At the time Péter Szijjártó, who was not yet foreign minister, said only that the former president “was conned.” It’s been a long time since Bill Clinton visited Hungary and therefore he is ignorant of the real situation. Otherwise, government officials simply ignored the comments of the two U.S. presidents. At that time it was only the right-wing media that put forth all sorts of conspiracy theories to explain what they saw as a concerted attack on Hungary. It was at this time that George Soros’s name came up as a man behind Bill Clinton.

So, less than two years ago the Hungarian government refrained from inventing fanciful stories about the evil George Soros, whose “main hobby” is his repeated attempts to overthrow the Orbán government. This is no longer the case. Today the government leads the way and the right-wing media only follows.

Bill Clinton is once again the bête noire of the Orbán government. A week ago, during a campaign stop in New Jersey, he said that “Poland and Hungary, two countries that would not be free but for the United States and the long Cold War, have now decided this democracy is too much trouble.

They want Putin-like leadership: Just give me an authoritarian dictatorship and keep the foreigners out.” In a response that seemed to come from the Hungarian playbook, Jarosław Kaczyński told reporters that “if someone feels that there is no democracy in Poland, they should be medically examined.” Hungarian foreign minister Péter Szijjártó, who happened to be in Sofia at the meeting of EU foreign ministers, announced that “no one, not even Bill Clinton, can allow himself to offend the Hungarian people in this way.” Of course, Bill Clinton was not talking about the Polish and Hungarian people but about the governments of Poland and Hungary.

But Szijjártó didn’t stop there. He claimed that “it is a well-known fact that George Soros is dissatisfied with the present Hungarian government and he would like it if someone other than Viktor Orbán would be the prime minister of Hungary. In our view, it is this dissatisfaction which is behind the American criticisms.” He reminded people that Soros is a friend of both Bill Clinton and his wife, who is currently running for the U.S. presidency. Soros always supported the “politics of the Clinton family.”

Fidesz immediately released its own communiqué, pretty much repeating Szijjártó’s claims. As Fidesz put it: “the face of the American criticisms is Bill Clinton’s but its voice is George Soros. In the past the American speculator tried to put pressure on the Hungarian government on several occasions, especially in issues of immigration and financial matters.”

The attacks of the Orbán administration on Soros and, by extension, on the U.S. government continue unabated. Today it was János Lázár who talked at length about Bill Clinton’s remarks at his usual Thursday marathon press conference. He went even further than Szijjártó because he managed to drag President Obama into the story.

According to Lázár, “not so long ago while visiting Europe, President Obama clearly spoke in favor of the importance of migration, settlement and even the forced settlement [of migrants].” He added that Obama and the U.S. “are following a very strong pro-migration, pro-illegal migration policy in the interests of having as many Muslims as possible in Europe.” To Lázár’s way of thinking, immigration “dilutes” Europe.

But, he continued, such a development will allow the European Union and the U.S. “to cooperate without constraints.” At today’s White House briefing Josh Earnest, who was unaware of Lázár’s comments, said he wasn’t “sure they’re worthy of a response.” Indeed Earnest is right. This is utter rubbish. The whole thing makes no sense, but this fact doesn’t seem to bother the head of the prime minister’s office.

Moreover, as Lázár sees it, the current migration is “an organized movement,” behind which he suspects George Soros. “The Hungarian government is prepared for attacks from George Soros because of Hungary’s migration policies.” Magyar Idők went so far as to claim that “Soros, by exploiting the European Union’s good faith, naiveté, and legal and military weaknesses managed to bring about one million illegal migrants just to Germany and hundreds of thousands more to other parts of the European Union.”

One really wonders about the sanity of the man in whose head these bizarre thoughts were born. That man, I’m afraid, is Viktor Orbán himself. He made many references to George Soros as the instigator of the refugee crisis. Foreign newspapers were full of stories last October that Orbán lashed out at Soros: “His name is perhaps the strongest example of those who support anything that weakens nation states, they support everything that changes the traditional lifestyle.” Orbán’s minions simply repeat and elaborate on the great man’s thoughts.