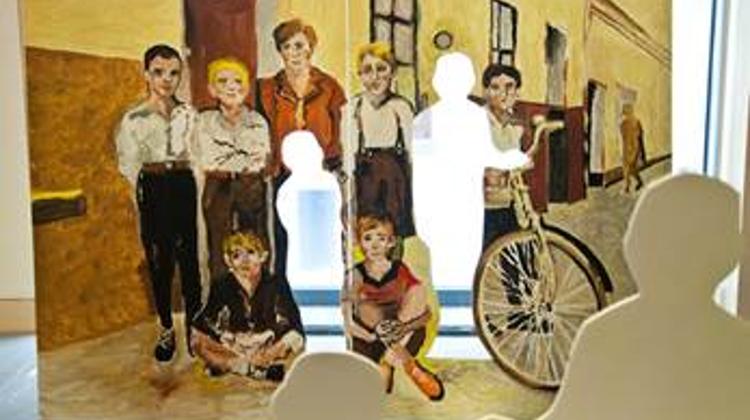 From April to May 2016, the Embassy of Canada in Budapest was home to a moving student-made art exhibit that creatively communicated the importance of human rights and the value of diversity. The exhibit, consisting of 10 art pieces and 3D installations, was the collective output of over 200 students, who participated in a project to promote tolerance and inclusion through media and education.

Visual World Foundation, a Budapest-based NGO, worked with students from six Hungarian educational institutions ranging from elementary to university level to produce the works of art, which was formed into the cohesive exhibit that was showcased at the Embassy.

Using two historical examples, the Holocaust and the 1994 Rwanda genocide, young participants explored difficult issues, focussing on the role ordinary people play in the face of human tragedies. The anti-discrimination project, called “Your Decision: Training Bystanders to Become Upstanders” expanded upon traditional education on discrimination, which tends to focus on victims and perpetrators.

Students worked to understand the motivations of individuals who passively watched as their friends, classmates and neighbours were deprived of their rights and contrast them with others who bravely engaged and helped those in need, ultimately saving their lives. Youth, teachers, educators and school psychologists collaborated through social media for four months.

Their experiences were enhanced by the participation of Éva Fahidi, a Holocaust survivor, who, now 91, provided insight and inspiration. As part of this multi-faceted effort, a 12-minute film was prepared featuring Canada’s Ambassador to Hungary, Slovenia and Bosnia and Herzegovina Lisa Helfand, who addressed Canada's fight against anti-Semitism and the importance of inclusion and acceptance in overcoming discrimination.

The video was screened in classrooms, galvanizing student efforts. Finally, all participants met at the Embassy on April 14 to take part in the unveiling of the special exhibit, followed by a half-day workshop.

At the opening, project leader Zsuzsanna Kozák recalled the importance of human dignity and individual responsibility towards others who may be subject to forms of discrimination. “We can hardly train ourselves to be heroes but if more and more of us begin to understand our own fears and motivations, recognizing what we can do to help others, then perhaps we can act as human beings even under strong pressures,” she said.

Ambassador Lisa Helfand toured the exhibit and discussed students arts and inspiration, with insights from art consultant and media personality Nóra Winkler. The Ambassador told students that “I am impressed by the quality of your work, which conveys a deep sense of understanding other people’s experiences.”

According to Miklós Thaisz, a senior government official from the Ministry of Human Capacity, the exhibit was successful in strengthening key concepts such as democracy and active citizenship in ways that young people best understand. Miklós Réthelyi, Chair of the Hungarian National Commission for UNESCO, identified education as the best way to combat intolerance and xenophobia. Réthelyi also announced that the project received the patronage of the Hungarian National Commission for UNESCO. Katalin Sommer, a Holocaust survivor, shared her experience from the Holocaust era, which moved participants and helped the audience feel and understand the personal impact of these events.

Training for Teachers and Students

The exhibit opening was followed by a half-day training and workshop in which students and teachers were actively engaged. Szilvia Gyurkó, a local activist for children rights, held a sensitization training for students to highlight the opportunities and responsibilities of being someone’s neighbour. Teachers explored ways in which lessons learned from past genocide events can be translated into classroom discussions. Holocaust survivor Éva Fahidi engaged students and teachers in a creative and stimulating drama game to seek to redefine concepts and terms related to individual responsibility.

The students’ art work is scheduled to travel to the six schools participating in the project and will be exhibited at other venues in the coming months.

The artwork produced is strong evidence that the project had a meaningful effect on the participants. They gained a better understanding of Canada’s advocacy for inclusion and equality and the benefits of embracing diversity. Most importantly, the project provided students from different schools and with different backgrounds the opportunity to celebrate their differences and the elements that bind them together. Students and teachers worked hard to think creatively about the concepts they learned and turn them into masterful pieces of art.

Primary School for the Visually-Impaired, Budapest