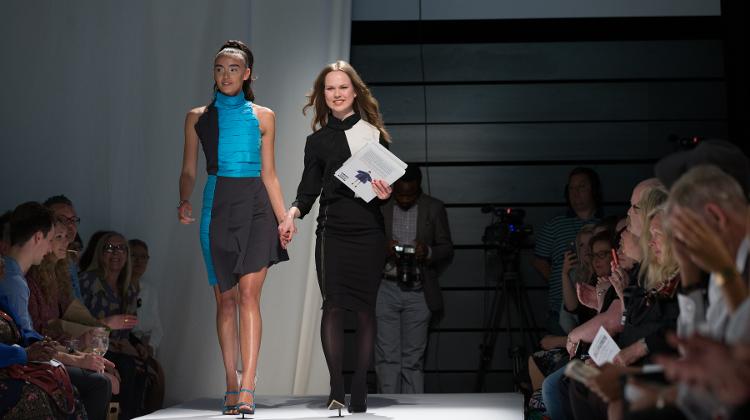 Kristina was shortlisted with her design entry at the Regent's Fashion Competition hosted by Regent's University London/School of Fashion&Design. Entries arrived from the UK and across Europe but only 3 students were invited to the Final Year Regent's Graduate Fashion Show where the winner and runners up were announced.

Students were given a design brief to make an outfit based on "wearable architecture" .

Kristina's work was inspired by exterior and interior elements of buildings and eventually guided her towards the theme she developed - spiral staircases. The outcome of the design process described, is a black and blue dress, a pair of shoes and jewellery, all of which were made her in Budapest by local craftsmen.

In the morning of 19th May, Kristina was taking her Cambridge International AS level Statistics exam at Britannica International School and right after that she flew off to London. The winner of the competition was announced at the start of the Final Year Regent's Graduate Fashion Show.

"I’m still in high school and have one more year to go. Ultimately I want to study fashion at university and work in the industry - the fashion world will hear my name again!"

"I would like to encourage everyone not to be afraid to take risks and approach new and seemingly unachievable targets, this might lead to suprising results."