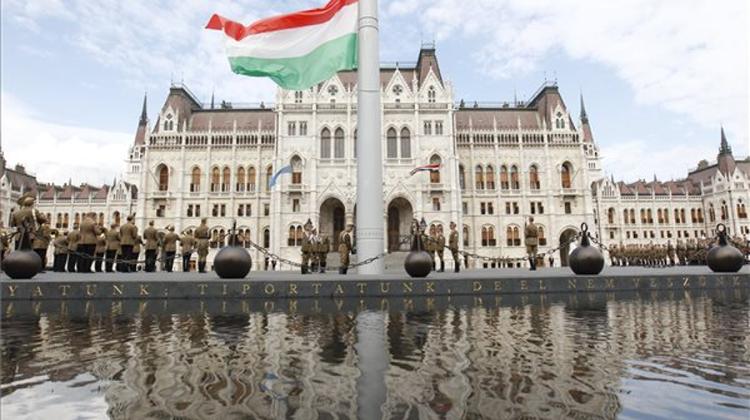 Commemorative events were held over the weekend throughout Hungary and the Carpathian Basin to mark the Day of National Cohesion, held on June 4, the anniversary of the signing of the WWI Trianon peace treaty. Hungarian communities have become stronger not only in the Carpathian Basin but across the world in the past decade, House Speaker László Kövér said on a commercial radio channel. June 4 continues to be a “day of mourning”, Kövér said, and argued that the “Trianon disaster” has not been processed and its ramifications have not been removed.

He insisted, however, that the government’s “determined, consistent and constructive” policies have promoted a new way of thinking and cooperation. Speaking at a commemorative event in Uzhhorod (Ungvár), in western Ukraine, the house speaker said that out of all the Hungarian territories that were ceded to neighbouring countries with the signing of the treaty, it was the Transcarpathia region that had suffered the harshest fate. But Transcarpathian Hungarians are also the ones who accomplished the most out of all ethnic Hungarian minorities, by sacrificing so much to retain their national identity and stay in their native land, Kövér said.

The House speaker said the only way Hungarians can put Trianon’s “psychological heritage” behind them is by strengthening national unity in the century ahead. The basis for this unity is national identity shaped by “our Christian intellectual roots, Hungarian language, culture and history”.

This is Hungarians’ most important, strategic resource in the 21st century, he said. Hungarians will be able to use their national identity to get ahead in a 21st century in which conflicts will not be about conquering land but “conquering identity”. Communities that lack a solid identity are destined to become losers in these conflicts.

“We Hungarians don’t want to be losers or victims in the times ahead,” Kövér insisted. Addressing a gala at the National Theatre, Deputy Prime Minister Zsolt Semjén said that “each Hungarian is born with the mission to contribute to the survival of the nation and preserve its values for the whole of mankind.”

Semjén said that the government was to provide a framework for building the nation’s future, such as through the institution of dual citizenship and support for ethnic Hungarian communities and their education and culture, while individuals should “intertwine the Carpathian Basin with a multitude of personal ties”.

Speaking at a commemoration in central Hungary’s Jászkisér, László Tőkés, MEP of ruling Fidesz, called for efforts to “recapture our national self-determination”, which he said had been “mutilated” by the Trianon treaty.

Tőkés, an ethnic Hungarian from Romania, said that “anti-Hungarian attitudes of post-communist states” was “still a great burden” and added that “communism still haunts us with its internationalism or antinational cosmopolitism replacing that ideology.” Tőkés warned that cosmopolitism and a loss of national identity was spreading among youth and children. “A voluntary Trianon” may take place through reducing or assimilating Hungarian communities, “unless we change our frame of mind, attitudes, faith and politics,” he said.

At an event at the House of Hungarians in Budapest, deputy state secretary for policy for Hungarians abroad Péter Szilágyi said that in 2010, the Hungarian government made it clear that it would do everything in its power to help Hungarian minorities “recreate all that was lost in Trianon”.

He said the government’s fasttracked naturalisation process has so far allowed for 800,000 Hungarians living abroad to be granted Hungarian citizenship. By granting Hungarians abroad voting rights, Hungary’s Parliament is once again a place where the entire nation is represented.

The deputy state secretary said the government’s programmes for Hungarians abroad focus on community building. This can involve building kindergartens or schools, establishing universities or renovating churches. Economic development is also at the forefront of the government’s policies, he noted, pointing out that Budapest also supports vocational training institutes and young Hungarian entrepreneurs abroad. Major economic development programmes have also been launched in Vojvodina, in Serbia and the Transcarpathian region.

The opposition Liberal and green LMP parties also commemorated the anniversary. The youth chapters of the two parties laid wreaths at the Well of Hungarian Justice in Budapest’s 8th district. Representatives of the parties said the signing of the treaty is considered a tragedy by the whole nation, and its anniversary should be something that unites, not divides Hungarians.

Gábor Vona, head of the radical nationalist Jobbik party, told a commemorative event in Nyíregyháza, in north-eastern Hungary, that Trianon “is a test that Hungarians must pass”. If they succeed, they will become better and more united, and the nation will survive “for another one thousand years”.

Vona said the current generation of Hungarians living in Hungary and abroad have a duty to “hold onto and stick up for one another”. If any Hungarian is hurt or treated unfairly, the rest have a duty to support him, Vona said.

The Hungarian parliament declared June 4 the Day of National Cohesion in 2010 to mark the anniversary of the day the peace treaty was signed in the Grand Trianon château of Versailles in 1920. Under the treaty, two-thirds of Hungary’s territory was ceded to neighbouring countries.