The Destruction Of Historic Buildings In Hungary’s Capital 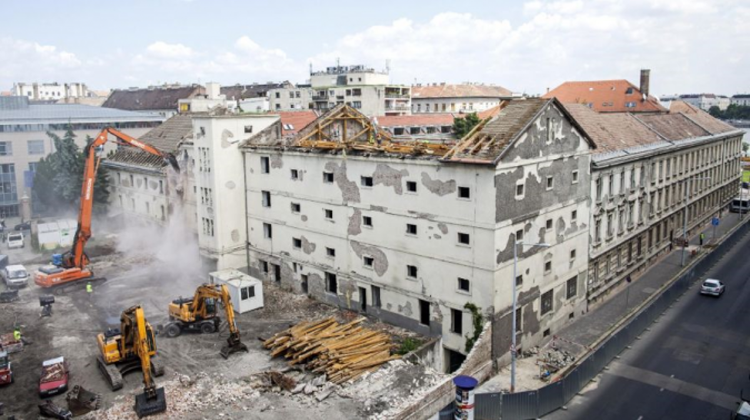 An increasingly disturbing trend is taking hold in Budapest. A growing number of historic buildings and heritage sites are being demolished or remodelled, with little to no regard for their architectural value, nor for the public spaces around these structures. On May 26th, bulldozers appeared in Bem Square, along the banks of the Danube, to demolish one of the most prominent remaining examples of military architecture from the days of the Austro-Hungarian monarchy.

The so-called Radetzky Barrack was built in 1897 and the granary located behind it in 1840. It received heritage status in 2011, but that did nothing to stop its demolition.

The structure witnessed (and was often at the centre of) almost every major turn in twentieth century history. During the First World War, it served as a military hospital. In 1944-45, the Gestapo and Nazi killing squads operated from the building. After 1945, the structure housed the much feared officers of the Stalinist regime’s Hungarian State Security, as well as the Workers’ Guard.

The 1956 Hungarian Revolution began with a demonstration on October 23rd, in front of the statue located directly across from the building. And then after the return to multi-party democracy, the conservative Hungarian Democratic Forum (Magyar Demokrata Fórum – MDF) used the building as its headquarters.

The entire structure, except for a small portion of its facade, is being destroyed to make way for a massive commercial complex–one which dwarfs every other building around it, and seems out of place in that part of Budapest. In a truly bizarre turn of events, the building’s heritage status ended up meaning nothing, because the developer, HB Reavis, received permission to proceed with the site’s development in 2010, thus predating the building’s formal designation as a heritage site. And which department issued that ominous permission to demolish the structure in 2010? None other than the Office of Cultural and Heritage Preservation (Kulturális és Örökségvédelmi Hivatal).

A portion of the historic facade will remain intact along Bem Square, facing the Danube, but the remainder of the building will be comprised of glass and steel. The new building, housing a staggering 32,000 square meters of office space and stores, will be named Bem Palace, and will open in 2019.

The developers have promised to include a new “community space,” open to local residents, although there are no details about precisely what this would mean.

Archaeologists point out that there are ruins from the Roman era underneath the building. As such, there might have been an opportunity to uncover and salvage these. The developer, however, has no such plans and will instead construct underground parking.

Róbert Hetzmann, President of a group called the Community of Hungarian Patriots (Magyar Patrióták Közössége), protested the decision, but his efforts were in vain. “A building that is historically prominent is the victim of the profit incentive,” remarked Mr. Hetzmann, referring to the fact that maximizing the amount of space that can be leased is the priority which trumps all else.

The Fidesz government intends to further weaken heritage preservation in Hungary. This summer, there are plans to fold the so-called Forster-központ, which is tasked with preservation, and all such duties and responsibilities will fall under the authority of the Prime Minister’s Office.

This is an alarming development, considering that Prime Minister Viktor Orbán has shown little interest in preserving heritage sites. It was his department, which went ahead with highly controversial plans to dramatically remodel the Castle District’s 18th Century Carmelite Monastery, which will house the Prime Minister’s Office. Mr. Orbán has always wanted an office with a large terrace overlooking the Danube and Parliament. And this is precisely what is being planned for the building, which forms part of the section of the Danube that is listed as a UNESCO World Heritage site.

The developers have already removed seven windows along the building’s facade, to make room for the prime minister’s massive terrace.

László L. Simon, the state secretary in charge of overseeing the transformation of the Castle District into government headquarters, remarked: “This will cost a lot of money, but it serves to make all of us happy.”