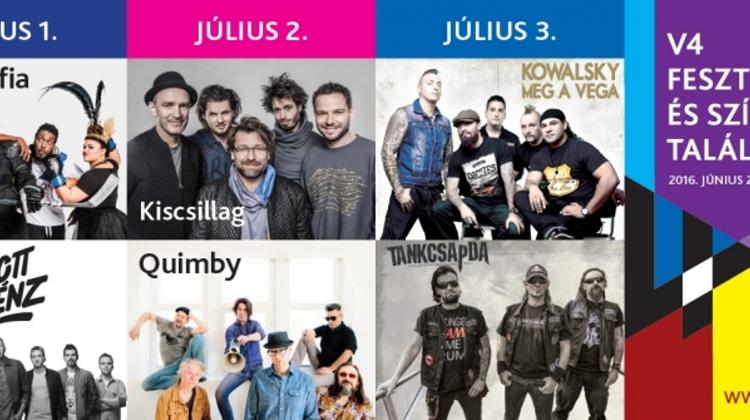 V4 Festival and Theatre Meeting is planned to be organized for the 4th time this year between 28 June and 3 July. It’s the cultural extension of the historical and political cooperation of the 4 Visegrad countries. We want to continue the cooperation started in 2013 that spans over borders, one that puts the artists and audiences of the region in touch and offers opportunities for pooling of experience, for studying each other’s methods. This year we again invited a Ukrainian theatre to further strengthen cultural cooperation and the festival is going to be organized around the theme of 25th anniversary of modern Visegrad cooperation.

The cooperation of the Visegrad 4 countries has its roots deep within history. For years back the political and economic ties of the V4 became a strong and authentic trademark of cooperation. One field can and should be added. That is culture and art. It’s really important that these four countries reach cooperation in this field as well. In 2015 we invited a new partner outside of the V4 region, from Ukraine and we will invite them this year as well. This extension brings new color and new content to the V4 Festival.

A premiere of Danube Bend Theatre Vác is going to open the Festival: Zsolt Pozsgai: The King’s meeting. The historical drama was written for the anniversary of the Visegrad Four. The program continues with performances from Municipal Theatre of Zlín (Labyrinth of the World and Paradise of the Heart), Jan Kochanowski Popular Theatre of Radom (God of Carnage by Yasmina Reza), Lviv Academic Voskresinnia Theatre (The Seagull) with a unique and large scale street-art performance, Kosice State Theater (The Libertine) and Csiky Gergely Theater from Kaposvár, Hungary (The dam).

Furthermore, a workshop is going to be organized with 20 actors from the 5 countries lead by Hungarian director.

The play created during the workshop is going to be performed at the Festival’s closing night gala. In 2016 some of the most famous and popular musicians (Quimby, Tankcsapda, Halott pénz, Irie maffia etc.) are invited to play after the evening theatre performances at open-air riverside concert location.

An international theatre conference will also take place during the Festival with well-known experts and artists from the region. In connection with the festival themes, the conference is about the 25th anniversary of V4. The jubilee and the fact that a new generation has grown up can be an excellent opportunity to examine where they are going.