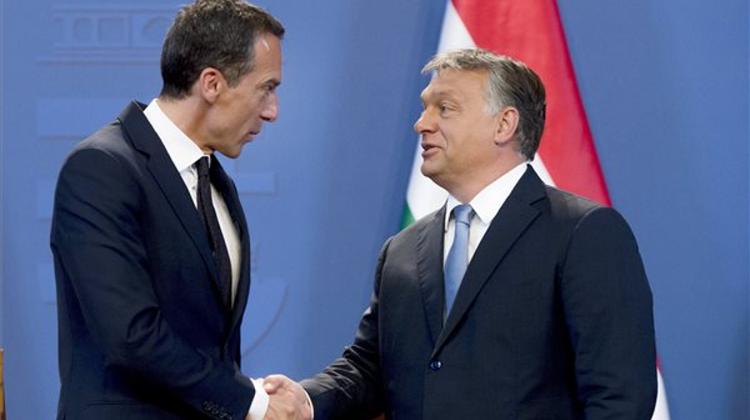 If Hungary can keep stopping illegal entrants on its southern border, it can also protect Austria from illegal immigration, Prime Minister Viktor Orbán said after talks with Austrian Chancellor Christian Kern. He said Hungary had now fully sealed its border with Serbia, noting that under the country’s criminal code, no one is allowed to stay illegally in Hungary.

Therefore, migrants who had entered the country illegally cannot pass through to Austria either, he insisted. Asked about migrants who are entering Austria from Hungary despite the strict regulations, Orbán said their passage into that country was made possible by a European Commission ruling that obliged Hungary to wind up its closed refugee reception centres.

If Hungary could require migrants to wait for the completion of their asylum procedures in closed facilities then none of them would be entering Austria, he said. Answering another question, Orbán said the Hungarian government supports civil groups helping migrants, adding, however, that most of the help from civil groups is needed on the Serbian side of the border.

He said there are currently 600 to 1,000 migrants waiting to be let in to Hungary. But Hungarian authorities only allow as many people into the transit zone as they can do checks on, Orbán said. Hungary’s view is that “every single migrant carries a public security and terror risk” and it can take months to determine how big that risk is or if it exists at all, he said.

When asked about supporting Republican presidential nominee Donald Trump, Orbán said the US Democratic Party’s foreign policy plan was “bad for Europe and deadly for Hungary”. In turn, the foreign and migration policy offered by Trump and the Republicans is good for Europe “and vital for Hungary”, he said.

One foreign policy plan is for migration while the other is against it; one favours democracy promotion while the other opposes it, he added. Orbán said Hungary is against migration as well as “exporting democracy”. This stance makes its interest clear, he said, stressing that Hungary does not intend to interfere in the US presidential election, which he said is an internal affair of the American people.

Kern said Hungary’s position on returning migrants was clear: those who first entered the EU in Greece should be returned there. Austria is aware of the related dispute between the European Commission and Hungary, and considers it important to clarify the issue, the chancellor said. Hungary’s justice ministry will provide documents related to border control to the Austrian authorities so that the latter is able to scrutinise the Hungarian position, he said.

If the measures agreed upon prove to be effective by September, namely the number of illegal migrants entering Austria is stabilised or reduced, Austria may provide further assistance in border control. It is a matter of disputes in Austria whether the current measures are satisfactory or border control should be tightened, the chancellor said, adding that closing the Hungarian-Austrian border is not a primary option.

In response to a question, Kern said that Austria and Germany “had profited” from Hungary’s measures taken on the Serbian border, with immigration in both countries showing a major decline. Orbán and Kern also discussed prospects of economic cooperation and agreed to examine the chance of opening new border crossings.

Both leaders expressed their condolences to the families of the victims of Tuesday’s terrorist attack in Normandy, France.