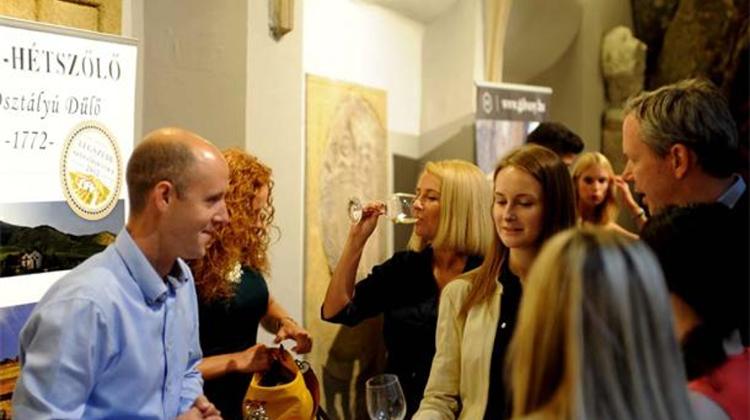 The Xpat Wine Club held its latest event last Thursday evening in the historic inner courtyard at <a href="http://www.danubiushotels.com/our-hotels-budapest/hilton-budapest" target="blank">Hilton Budapest</a>. A great mix of expatriates and Hungarians enjoyed networking and socializing, whilst sipping a special selection of local fine wines. Tasty finger food was served thanks to the hotel in the enchanted setting of this UNESCO World Heritage site. Six wineries representing Hungary’s top regions presented various high-end varieties of whites; rosés and reds to readers of Budapest's international community portal.

Attendee Krisztina Matkó-Horváth, owner of Gaia's Garden Jewellery and one of the winners of a bottle of wine at XpatLoop’s latest event raffle, summed up the atmosphere perfectly:

“A very pleasant evening, combining a fantastic setting, a friendly group of international people, a wonderful selection of wines, and fun entertainment”.

Guests clearly enjoyed wine-related entertainment from the Taste & Play Wine Roulette team. In addition to the wine game, they also offer entertainment for those more predisposed to spirits, beer and even chocolate, in the form of innovative games such as Spirit Poker.

The vineyard stretches from the picturesque Káli Basin to Aszófő, where the Fodorvin Wine House and Vinoteque serves both individual customers and group tastings.

Fodorvin combines modern and traditional wine making, resulting in fresh white and rosé wines including Aszófő Chardonnay (2009) and Cabernet Sauvignon Rosé (2010), both of which were named “The Best New Wine in Hungary”.

Gilvesy Winery was founded by Róbert Gilvesy, who returned from Canada to Hungary, is situated on 13 acres of vineyards planted 50 years ago on Szent György-hegy in the Badacsony highlands on the north shore of Lake Balaton and has been bottling wines since 2012.

Hétszőlő Estate was founded in 1502 by the Garai family, who selected what they believed to be the best seven parcels of the land in the Tokaj region (Hétszőlő means "seven vineyards" in Hungarian). Later owners included Gáspár Károli, translator of the Bible into Hungarian, Gábor Bethlen, prince of Transylvania and the Rakoczi aristocratic family, before the Habsburg royal family took possession in 1711 and luxury entrepreneur Michel Reybier in 2009.

The Estate consists of the vineyard on the south slope of Mount Tokaj, the Rakoczi Cellars, built at the beginning of the 15th century in the village of Tokaj and the Château Rakoczi-Dessewffy, located halfway between the vineyard and the Cellars, which house the offices. Wine selection ranges from Furmint, Sárgamuskotály, Hárslevelű, Kövérszőlő and Aszú.

Linbrunn Winery began cultivating grapes and making wine in the 1970s in the Villány wine region. In 2010 the vineyards were expanded from 2.5 to 22 hectares, enabling the firm to enter the market as an independent producer. Founder Jenő Kertész named the firm after his mother, whose grandfather was a winemaker in Szekszárd and Magyaregregy.

Now 89, Paula Linbrunn spent her entire working life in viticulture and remains active today. Special care is taken to ensure that only sufficiently ripe, healthy bunches of grapes are used. Linbrunn’s winemakers employ new technologies but with a respect for tradition to ensure the values, strength and flavor from the vineyard ends up in the bottle for the customer’s enjoyment.

Ruppert Winery was established by Ákos Ruppert as a family business in 2002 and first produced wines in 2006. Today it cultivates 27 hectares of vineyards in the western part of the Villány wine region, part of the production of which is made into wine and the remainder sold as grapes.

Twickel Winery, the largest vineyard the Szekszárd wine region, accounting for 200 of the region’s 2,000 hectares, has been owned since 1993 by Baron György Twickel, whose mother, Countess Mária Terézia Zichy, fled from Hungary in 1956 to Germany, where she met her current husband Baron Clemens Twickel.

After 1989, Countess Zichy began exploring opportunities relating to her family’s former multi-generational holdings in agriculture. Formerly known as Liszt Cellars, Baron Twickel, who lives in near Szekszárd with his wife and four daughters, modernized, restructured and renamed the winery, the primary varieties of which are Kadarka, Kékfrankos, Cabernet Sauvignon, Cabernet Franc, Merlot, Pinot Noir, Portugieser and Syrah.