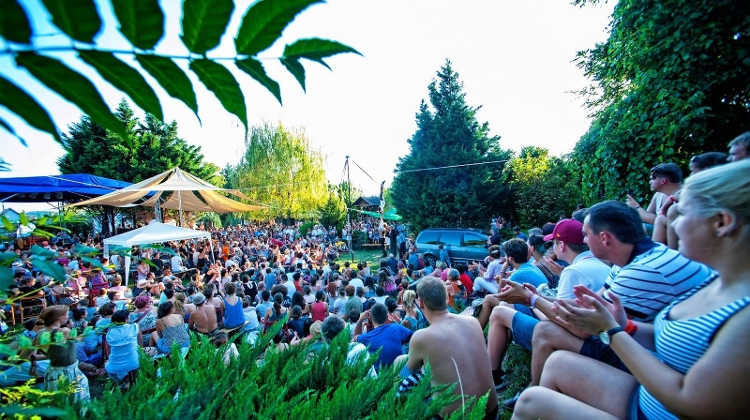 Between 2 - 6 August, this multi-arts festival labelled ‘excellent‘ by the Hungarian Festival Association includs around 20 locations in 4 villages over the course of 5 days, every year in August.

Several of the musical, theatrical, literary and fine art programs require an intimate setting for a small audience, while others are real open-air festival-concerts with thousands present. Here's a quick guide to the main locations in the lovely Villany Wine Region, plus a video and list of performers this year.

The first, defining accident: in June of 2008 I recieved a phonecall: the 10 days in the Valley of Arts that have been already fully organized, would be cancelled due to the lack of funds. Our decision was to go against our bad luck and organise the festival anyway.

A festival of our very own. A festival taking place south of Pécs, in the beautiful Szársomlyó statue-park, and at its sorroundings. However small and humble it might be, we felt it was our sign to get started on our own path.

We managed to get a meager funding from Pécs, the then-current cultural capital of Europe, and the nearby villages also wanted to take part, and helped out- there was some income from the tickets, and from a sum of 40.000 Euro, we created a highly successful two and a half day long festival. It was tiny, but it was alive, and it was ours.

The choice of name (The Devil’s Cauldron) might be somewhat misleading; one might associate it with some heavy-metal festival, so we thought it best to shortly tell the story behind it:

One of our main locations is the forementioned statue-park, where this summer we had the Tiger Lillies performing, for example. This statue-park is originally a quarry, that is called by the locals „the devil ploughed mountain”.

This name is inherited from the legend in which the devil desperately wanted to get the most beautiful girl, Harka, but for that he would’ve had to plough the whole mountain top-to-bottom in just one night.

To make a long story short, he didn’t quite finish it, he disappeared, leaving behind this beautiful quarry, where foreign and Hungarian sculptors have been working for decades now, leaving behind their works of art in the park.

One of the first things we did on the summer of 2008 was the election of our patrons. Formality, you might say – flourish. And that’s true. But by choosing (and of course winning over) our two patrons, we defined ourselves quite a bit. For example, we established how politics might never, from any side, enter this festival.

That wasn’t an easy decision, since politics is where funding usually comes from, but that is okay. It wasn’t easy, because choosing to operate under such names as Tamás Cseh, and Mari Törőcsik, two artists who are legends, masters, absolutes of the culture of Hungary, we believe we have a huge responsibility to live up to.

But they were also our pledge to never, ever let go of our ideals of diversity and quality for any financial or political power. Mari Törőcsik is one of the greatest actresses of all time, and Tamás Cseh, who passed away two years ago, exactly during the time of this festival, was a musician and has been a living legend since decades. An unbelievable artist and a wonderful person.

BASKET-WORKS: some words about a „barefoot festival”

„We need to return to handcraft. „Basket-works”. It has been my bug for decades. It might actually be the secret to Bárka: it’s not a „new” theatre we have to create- it’s returning to the haphazardness of theatre, the eventfulness, and thus to the public significance.

Significance that has to do with celebration- the very thing that created theatre. Celebration is beautiful…” (József Ruszt)

Theatre is probably the most popular genre of the Ördögkatlan, and at this now five-day-long event, people have to fight through crowds to get into a show – we could say only the strongest and most desperate few do so.

That’s the way it is, despite the fact that we try to provide a great variety, like having had 120 shows last year, and slightly more this summer, the Nagyharsány sports court provides stage to the most popular rock-bands, and the ones that are less known to Hungary are also invited (such as the American Firewater in 2010, the German BudZillus in 2011, Wombo Orchestra many times from France…).

Villánykövesd is firstly a world music and folk music center, within its church, classical concerts are held, which the churches of the other two villages also provide grounds for.

The lovely terrace of the Vylyan Winery is for literature and jazz for these five days, apart from the very best Hungarian representatives of the genre, we had one of the greatest legends of saxophonists, Chris Potter from New York to perform here, and also the greatest figures of Hungarian literature, from Péter Esterházy to György Konrád, from János Háy to György Spiró. It must be said that this location was also the Best Winery of 2009 - just as a reminder that these lands are the most important wineyards of our country.

We have to spare a word for Kisharsány especially, where a synergistic group, the Mediawave team famous for their independent film festival, used to organise part of the programme. They hold photography, film, music and architecture workshops, as well as reach out to cultures that we don’t really get to meet in these tiny Hungarian settlements.

Day by day, miraculous encounters take place between creators and consumers of art in an extraordinary, and yet ever-so-natural fashion; one wouldn’t dare to dream it’d all work out in such a way. Ukrainian, Turkish, Moroccan, Indian and Hungarain-gypsy people making music together, and spending time with the good old Mr and Mrs Kisharsány, who possibly never in their lives left the village before.

Beremend - the scene of the great outdoors classical music concerts: Mozart's Requiem, Symphony 9 from Beethoven, as well as Félix Lajkó's and the Dohnányi Symphony Orchestra's concerts were intoned here.