Bikes, Buses, Cars: A Question Of Balance In Budapest 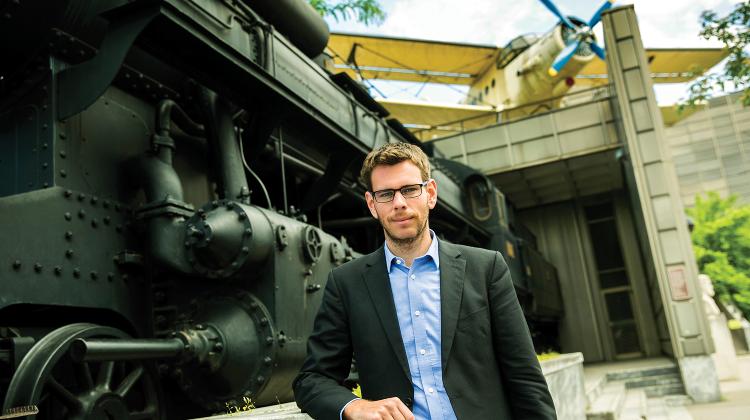 The former director of Budapest Transportation Centre BKK, Dávid Vitézy, is an important of a more sustainable transportation policy. He has been working tirelessly years to expand cycling infrastructure and greenery, and improve public transport. Here he also shares his opinion about the Liget project and Hungarian bus production.

What have you done in the past years to improve bicycle transport in Budapest?

I am very proud of the projects carried out in the past years. The successful public bicycle rental system MOL Bubi has been used more than 650,000 times since it opened. The numerous new bicycle lanes are also a proof that Budapest citizens have a growing demand for bicycles. The number of cyclists is 11 times as great as in 1994. Luckily this trend seems to be unstoppable. Bicycles are the most environment-friendly and healthiest way of transportation without a doubt.

How do you evaluate the current situation of cyclists?

For some reason the City Council is taking steps towards reverse urban development, meaning in my opinion that we are returning to the traffic trends of the 1970s. I support the ongoing discussions about the reconstruction of Bartók Béla út [in District XI]. Back when I used to manage BKK, we prepared a plan that contained broader tram stops, single car lanes, a bicycle lane and parking places. As a result of the current reconstruction the pedestrian path became narrower and the bicycle lane is still not there. Instead of that there are two car lanes, which are actually not utilised.

Bartók Béla út is a symbol for discriminating against cyclists; in many cases their needs are not taken into account, resulting that they are understandably riding on the street. I hope there will be a turnaround soon, since such measures are not only opposing the path of sustainable transport policy but are even against the future of Budapest transportation.

Where else are cyclists discriminated against in the capital?

A couple of years ago we allowed cyclists to use the bus lanes of streets with less traffic, since otherwise cycling transport would have been simply impossible in these places. If these measures are going to be indeed reversed then cyclists are only going to be able to ride in the car lane, which is really dangerous. It’s also not clarified yet whether a bicycle lane may be built in the inner lane or not. Additionally, we had a project that was supposed to make the Kossuth Lajos utca [in District V] and Rákóczi út [Districts VII, VIII] more environmentally friendly with a broader pedestrian lane, more trees and fewer car lanes. Since that time these projects have all been stopped.

What is the reason behind the new transportation policy?

In my opinion it’s coming from the generation of engineers who want to apply the US-American car-transportation-focused urban development model from the 1970s – which is still causing a lot of trouble in the American metropolises – in the historic city centres in Europe. Many of these engineers have not kept up with the newest developments, which are not pronouncing the all-consuming car lanes as the only solution, since they result in traffic jams and pollution. I believe that this debate is caused by generational differences, and it has to be bridged in order to enable a more sustainable transportation policy.

Is the infrastructure focused on car drivers actually unsustainable in the long run?

They have realised even in the USA that it’s worth putting more emphasis on public transportation. Car traffic has been suspended on Times Square, there are broader pedestrian lanes on Broadway and hundreds of bicycle lanes have been built throughout the whole New York City.

Tram lines are relieving traffic in Miami Beach. In San Francisco they are tackling new investments as well. North America is going through a huge change of trends. Back to the Hungarian metropolis: a large majority of Budapest citizens uses public transportation and 60% of the population wants an environmentally friendly transportation system. Everyone wants more green surfaces. Even the temporarily closed Szabadság híd (Freedom Bridge) was filled with a crowd of people shortly after the cars were gone.

What will be the consequences of the Liget project on the environment?

Within the Liget project I am responsible for the reconstruction of the Museum of Transport, which I fully support. The new museum will occupy less space, since the extra building added in the 1970s will be demolished. This will allow the green area around the museum to grow significantly, as will the elimination of parking spaces.

All in all, the new institution will reflect a more environment-friendly urban development due to the already mentioned aspects. Furthermore, there is no doubt that City Park needs a complete renovation. From the transport-technical point of view, the integration of City Park, which is still divided by the prolongation of the M3 highway, is one of the greatest wins.

Concerning sustainability, does Hungarian bus production have a future?

It’s all very clear: the Hungarian bus industry has to be rebuilt, without a doubt. However, this won’t happen from one day to the next. After decades of hiatus, Hungarian-made Ikarus buses were out of operation during my time in office. By today there are already more than 50 buses on the streets. The first Hungarian electronic buses were put into operation quickly. When I took office in 2010, these kind of environment-friendly buses were needed so much that we purchased several hundred right away.

This is why the projects were given to European large producers, who were able to deliver the desired number of buses quickly. Nevertheless, the bus production began in Hungary, and it will continue to be promoted. Concerning the transportation infrastructure in Budapest you can say that all in all the capital has very good starting conditions, such as a well-developed public transportation system and dedicated cyclists. All of this is a great value, which should be handled and used as well as possible.