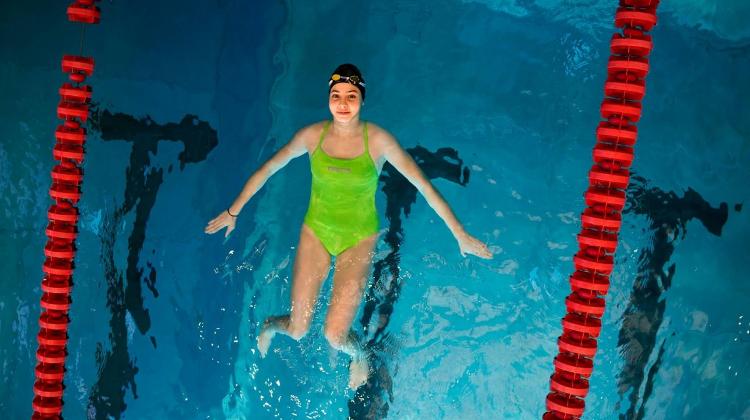 A public TV announcer commenting on a broadcast of the Olympics yesterday failed to mention the name of a swimmer representing the Refugee Olympic Team, even after she won her heat, causing an outcry in the press and social media. The Helsinki Committee questioned if the omission was political, but the commentator blamed a technical error.

Yusra Mardini is an 18-year-old Syrian refugee who saved the lives of more than a dozen other refugees by jumping in the water and swimming for more than three hours while helping push an inflatable boat that began sinking on the way from Turkey to Greece.

Crossing Europe as a refugee, she passed through Hungary on her way to Germany, according to reports. She now lives and trains in Germany, and, competing for the stateless refugee Olympic team, she won her heat of the 100-meter women’s butterfly Saturday, in Rio de Janeiro.

However, as reported widely in the Hungarian press, Jenő Knézy Jr., the commentator for the M4 Sport channel, failed to mention her name on live commentary, either when listing the other four competitors or when Mardini won the heat.

In a Facebook post quoted by online news source hvg.hu, the Hungarian Helsinki Committee proclaimed “honor to the star of the refugee team at the Olympics, shame on the Hungarian public media,” adding: “It is surely an accident that right in the middle of the government’s hate campaign, the name and success of a refugee could not be mentioned in the public media.”

Hvg.hu addressed MTVA directly in an attempt to determine whether Knézy’s failure to mention the refugee competitor was the result of any editorial policy on the part of the state broadcaster, or if it had simply been an error.

In reply, MTVA issued a statement to hvg.hu saying that the omission was unintentional and had been caused by “technical problems” with the broadcast. Knézy himself confirmed through the statement that he had no intention to deliberately omit Mardini’s name.

He added that the heat in question carried little weight in the competition, and that he had taken the opportunity – as at other times – to convey information to the viewers concerning the Hungarian team that did not relate directly to the action on screen. He also indicated that due to technical issues his team was dealing with at the time, he did not have constant audio or video feed available to him.