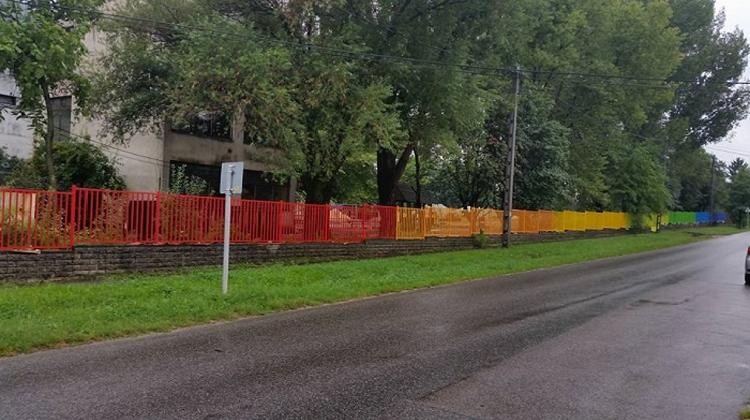 Residents of Pomáz, a small town near the capital Budapest, have complained about the new fence of a local school because it reminds them of the rainbow colors of the Pride movement, supporting the rights of LGBTI communities.

They turned to their parliamentary MP, Attila Sarkadi, who posted the following on Facebook:

“I am of course aware that the rainbow color has a meaning. The same would be true if they painted the fence in the colors of Árpád stripes (old Hungarian symbol of red and white/silver stripes – ed). If the leadership of the school or parents decide to paint the fence over, I will be happy to contribute to the costs and will even help with the job,” he wrote.

Some Facebook readers told the MP, a representative of radical Jobbik party, that they totally agreed with him and the “rainbow colors” are not worthy of a school. Others pointed out to the MP that the fence looks nothing like the symbol of LGBTI ( Lesbian, Gay, Bisexual, Transgender / Transsexual and Intersexed) pride.

Sarkadi wrote an open letter to the mayor of Pomáz asking him to order the repainting of the fence. The MP asserted that the appearance of the fence is an “exact copy” of the Pride flag, and the painting was also supported by the members of the The Church of Jesus Christ of Latter-day Saints.

Now it looks like the action of the MP was not in vain. Mayor of Pomáz László Csaba Vicsi told Hungarian news website Nol.hu that they are going to examine the case. The municipality had sent a letter to the parents asking them whether they should repaint the fence.

“If they decide the current painting cannot stay, we will repaint the fence,” he said.

Protest against the rainbow flag in Hungary is nothing new. After the Slovakian government banned the display of the flag above its Budapest embassy, Hungarian Minister of Foreign Affairs Péter Szijjártó explicitly forbade Hungarian embassies from displaying flags other than those of Hungary and the European Union – or, in some cases, the flags of Hungarian minority groups.