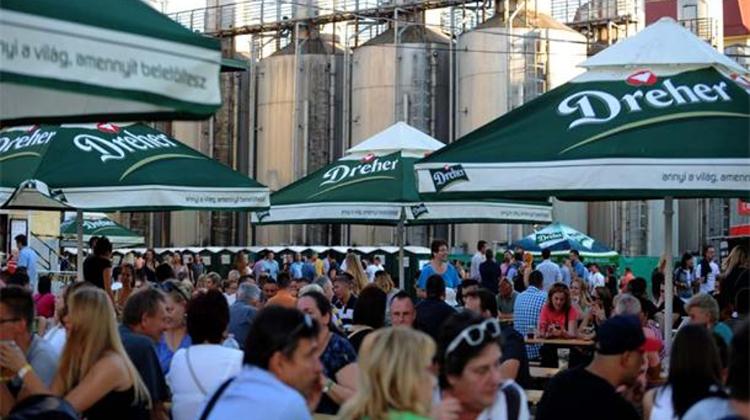 The festival classifies itself as an underground event, probably because of its location. The courtyard of the Dreher Breweries in Budapest Kőbánya district became a festival center once again from 26th -28th August. Guests were treated to plenty of Hungarian beer and bands, with nearly 140 beers on tap to try. The performing bands included Péterfy Bori & Love Band, Vad Fruttik, Žagar, Ivan & the Parazol, Margaret Island, Akkezdet Phiai, and the Biebers. The festival has its own official song, by SuperStereo and KRSA, which made it even more special.

Dreher is already a well-known brand in Hungary with a history of 160 years. Now this festival is quickly adding to its tradition. At this year’s Dreher Feszt (which is the second one they have had), the most successful brewing technology was evident. Cold hopping had a prominent role, while the freshest, unpasteurized Dreher Tank Beer was also filling many glasses. The latter had its own separate location at the TankBeerBar.

Enthusiasts could test themselves with the bitter-citrus Dreher, as well as, the flower generous gourmet elderberry flower Dreher Floral. And for those who would have liked to learn about beer brewing, you could visit the beerhouse and the fermenter. Other treats for the beer folk included beer specialties at onsite pubs, set up specifically for this occasion, such as Rocklap, Komlóterasz, Üstökös, or Múzeum Brasserie.

In addition to sipping at the „Wonderland of Beers”, special programs were awaiting the guests: Mixer Truck, Rock sheet, Dubbed Museum, “Komlóterasz” (Terrace of Hops) and Ruin Pubs. What was also great about this festival was that from Örs vezér Square, free buses run to and from the festival, which is just what you want after a big night out!