How To Keep Your Laptop Clean 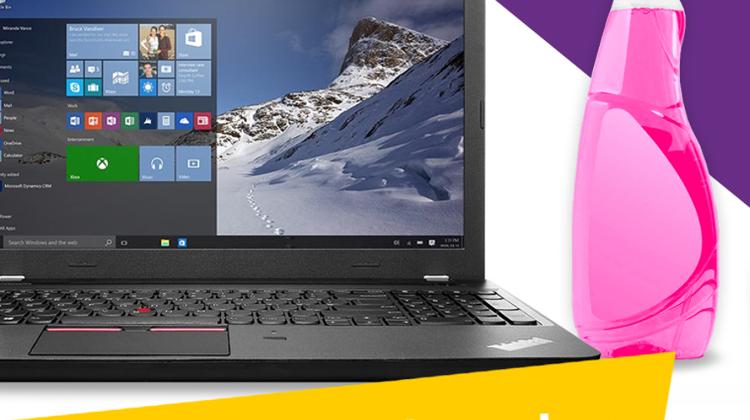 By Notebookspecialista: Besides making it look unattractive, the dust and dirt accumulating on your laptop may also radically affect its performance. Fortunately, you don't have to turn to a professional every time you want to clean your beloved device. Hopefully, it goes without saying that you should keep that cup of coffee as far away from your brand new notebook as humanly possible. Shiny surfaces attract dust and fingerprints anyway, making regular cleaning inevitable – add some greasy fingers, crumbs and sticky fluids to that, and you'll need a superhero to restore the original, pristine state.

Desktop computers pose less of a challenge, since, ideally, their hardware is only exposed to dust, which should be no problem with a less densely packed computer chassis.

The interiors of notebooks, however, have everything calculated to the millimeter, including the ventilation slots: if those are blocked by large amounts of dust, cooling becomes a hassle, reducing not only hardware performance, but also the lifespan of overheating parts.

This is particularly vexing if the graphics unit, the most notorious heater, is under a lot of strain (when playing games, enjoying HD videos or using editing software, for example). Also, if cooling performance drops, the fans are forced to rotate faster, eating away battery life. Clearly, you have a lot to gain from keeping your laptop clean.

First and foremost, power off your notebook, unplug, and, if possible, remove the battery. Clean the external casing using a damp wipe and an all-purpose cleaner, and in the end, wipe it off with a dry cloth. You should be extra careful with the bottom plastic casing, as fluids may ooze in through the fan slots and around the seams.

You can clean the display with a designated wipe (which you may fetch from any electronics store or large supermarket), or a microfiber cloth – but you're just as likely to succeed with a simple window cleaner.

However, keep this in mind: never spray the solution directly on the display surface, as it may easily wick up inside under the panel, and effectively wreck your laptop.

To get rid of keyboard dirt, a can of compressed air will come handy (especially since you will also use it for internal cleaning). It can smoothly blow out the dust from under the keys. Removing a notebook keyboard is not an easy task, and a wrong move may even snap the trim piece, so you may want to steer clear unless it's absolutely necessary. Isopropyl alcohol may be your best choice to wipe the surface of the keys, as it evaporates almost immediately, keeping fluids from getting under the keyboard (and it removes greasy fingerprints without a trace). If other people use your notebook – or there is a full-blown flu epidemic – you may also want to wipe the surface with a disinfectant to dispose of germs.

If your laptop keeps heating up more than usual, the most likely reason is the accumulation of dust around the fans and cooling slots. Without any expertise, it is inadvisable to take the computer to bits and pieces, but it may not be necessary either. In most notebooks, at least a few panels can be unscrewed in order to access the interior of the device. Before fetching the screwdriver, though, make sure that removing the panels won't result in losing the warranty. If so, it may be wiser to enlist professional repair service.

If you lack the experience, it might also be useful to take a few pictures before/during the disassembly process, so you can later tell which screw goes where.

Fluids are obviously not an option here; your best friend is the compressed air mentioned before. The operation is best performed in a relatively dust-free space (as gathering up more dust in the device than you remove from it defeats the purpose), but also one where the dust you blow out won't be an issue.

Whether you have had the panels removed or not, the principles remain the same. Try to keep blowing the dust outward, as making it circulate inside makes little sense. Proceed with extreme caution around the fan; overspinning the blades may damage them, so never blow air for too long. Use short bursts, and wait until the fan blades slow down.

Unless you want to make it onto a New Year's Eve gag reel, never get at the insides of your notebook with a vacuum cleaner. If you're using an air compressor instead of canned air, be extra careful to keep the high-pressure air from harming sensitive parts. And, of course, if you feel too nervous or under-equipped to handle the cleaning, don't hesitate to turn to a professional.