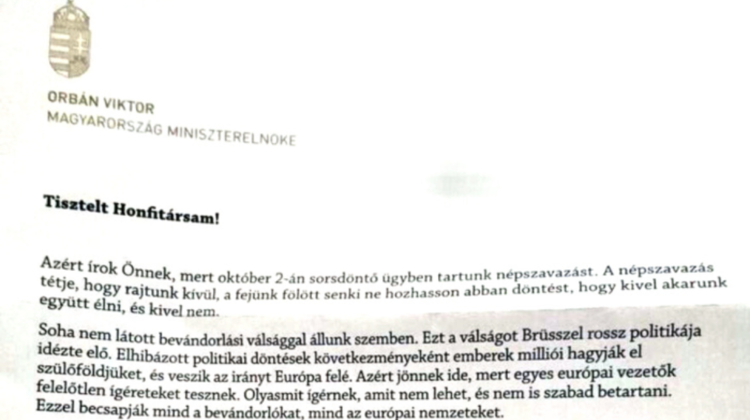 Hungarians living abroad have received a letter from Prime Minister Viktor Orbán encouraging them to participate in the upcoming referendum against the EU refugee resettlement quota. The letter stresses the importance of the vote for defending European culture and indicts Brussels and European leaders for causing the refugee crisis and recent terror attacks in Europe.

Our translation of Orbán’s letter is below.

I am writing you because on October 2nd we are holding an historic referendum. The stakes of the referendum are that no one other than us can make a decision over our heads about who we want to live with, and who we don’t.

We are facing the kind of crisis that has never been seen before. This crisis was caused by the bad politics of Brussels. As a result of flawed political decisions, millions of people are leaving their homelands and heading for Europe. They are coming here because some European leaders have made them irresponsible promises, the kinds of promises which cannot and should not be kept. They have deceived the immigrants and all the peoples of Europe alike.

One and a half million immigrants arrived in Europe last year alone. Compounding the problem, tragic events have occurred in recent months, showing that uncontrolled immigration leads to terrorist attacks. The flawed politics of Brussels puts the future of our culture, our everyday safety, and our national economy at risk.

Brussels has decided that it wants to distribute the illegal immigrants among the EU member states. It wants us to pay the price for its flawed politics. If this plan is realized, in the future we will not have a say in who they want to settle in the Carpathian Basin.

I ask you to join us in putting a stop to Brussels run amok. Together, let’s say no to forced settlement! If we don’t stop them, their false promises and unrealistic politics will destroy Europe, and with it the present and future of Hungary.

I ask you not to risk the future of our children. If we all go together, we can stop the politics of Brussels, and we can make them understand: This cannot continue!

We Hungarians know well what is at stake. We know what kinds of dangers come with changes in Europe’s ethnic, cultural and religious composition. I ask you to please participate in the October 2nd referendum, and to encourage your friends and acquaintances.

Hungary is counting on you!