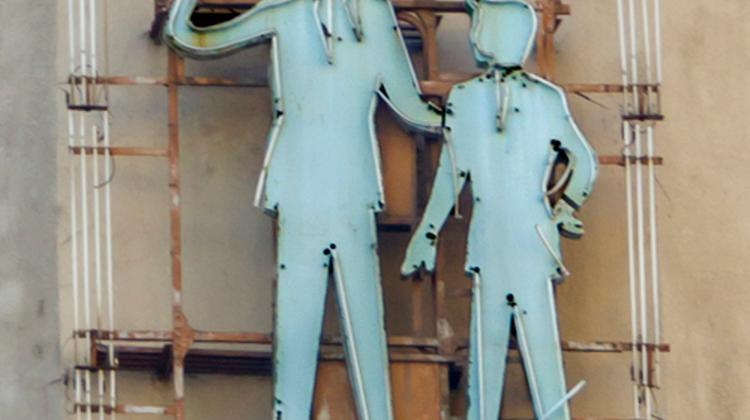 Throughout most of the 20th century, neon lights were the sign of progress and modernity – and behind the Iron Curtain, the illusion of it. Fixed upon the crumbling facades of the once magnificent buildings of post-war Budapest, neon lights beamed banal advertisements and Communist propaganda just like in any other country of the Eastern Bloc.

Still, from the relative comfort of the relative freedom of post-Communist Hungary, it is easy to feel some kind of a nostalgia for a time when advertisements (not the political ones!) seemed more direct, more honest, without trying to sell imaginary „lifestyles” through marketing hocus-pocus. Even regardless of their message, socialist era neon lights have various historical, artistic, townscaping and even some „archeological” value. Exploring them is one of the mystical ways to try to comprehend the realities of everyday life behind the Iron Curtain.

Lights of Budapest wants not only to document this characteristic of the city but create a catalogue where all the images are presented with the same kind of framing and a palette of saturated colours that reminds us to the American "Golden Twenties" images. Even if the political situation was totally the opposite, the purpose was the same: create this idea of modernity and fake prosperity.

Through her ongoing artistic neon project, Budapest-based Catalan photographer Isabel Val contrasts past and present, and through the crumbling neon signs set against an optimistic background, exposes the simple promises Communism could not deliver.

Sztár (Star)
Socialism's answer to the Coca-Cola of the decadent West: copy-cat Sztár soda beverages (1970). Producing stopped in 1987, but the remnants of the giant neon advertisement can still be seen today on Rákóczi Avenue in central Budapest.

Selyem (Silk)
Mass-manufactured neon sign for textile stores, which used to be all over the city in a time when it was more convenient to just buy the material and have your clothes tailored in a cheap workshop. Believe it or not, this particular store is still open in Szent István Boulevard, and three letters of this neon sign still illuminates the Budapest night sky.

Vetőmag (Agricultural seeds)
Agriculture was a source of pride and national identity for the Communist leadership. This giant neon composition used to advertise agricultural seeds in the middle of Budapest. (Esti Hírlap is a now defunct daily newspaper, founded in 1956.)

Avtoexport Moszkva (Car Export Moscow)
Stylish and flashy, this advert for Soviet cars (Lada in particular, as the barely noticable yellow letters indicate) once dominated the Danube riverside opposite of the Hungarian Parliament building. Although it is now out of order, it is still hard not to notice.

Wernesgrüner Söröző (Wernesgrüner Beer House)
What else could it have been than the sign of Socialist well-being and prosperity? The Wernesgrüner Beer House, founded in 1974 by the state-owned North Buda Hospitality Company (Észak-Budai Vendéglátó Vállalat), lured its guests with East German beer and a seemingly cosmopolitan, yet characteristically Socialist neon monster.

Bambi (Bambi)
Bambi -- a slang word for a drink in Hungarian -- opened on 1st May (International Worker's Day), 1961, and has been operating as a café ever since. The furnitures and the neon sign are still the same, and it is still a popular place for people of any age who don't want any spectacles, just have a drink with their friends.

Ne szemeteljen! (Do not litter!)
This surprising educational message for the Socialist masses still dominates the open big open space next to the Southern Railway Station. The harsh order is softened by the second line, asking the citizens to help the work of the municipal cleaning company. This neon sign has been updated after the fall of Communism and is still up and running.

Ibolya espresso (Ibolya café)
Ibolya is one of the very few 1960s cafés in the heart of Budapest that survived the capitalist transition without disappearing from the map. Its original neon sign still looks good today, especially for fans of retro.

Biztosítás (Insurance)
Once upon a time it was enough to advertise insurance simply by saying "insurance", because there was only one (state) insurance company. Like so many other neon signs, this too was doomed with the arrival of free market economy.

Fürdő (Bath)
Some baths in Buda has been around since the Turkish occupation in the 16th century. This one in Pest, however, was built to improve hygiene amongst the socialist working class. Today it serves the homeless.

Női Fodrász, Kozmetika (Women's Hairdresser & Cosmetics)
Signs like this implied that Budapest was a bustling cosmopolitan city in the late 70s. Arriving from a more oppressed country of the Communist block, a traveller could even have agreed to that.

Pincérnő (Waitress)
Eat, drink, and don't worry about politics: government-prescribed recipe for a content life in the happiest barrack of the East.

Fényképész (Photographer)
Let the photos in the shopwindow talk instead of cheap marketing tricks. A simple neon sign announcing the profession will do. The photo studio at Oktogon has survived for decades this way.