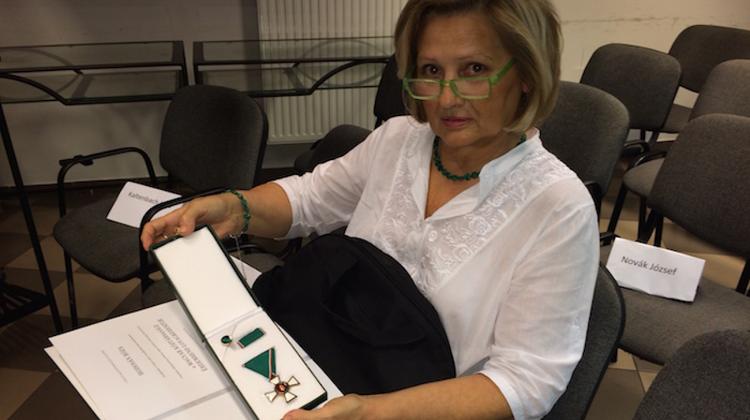 Sixteen Hungarian state medals were auctioned off Monday evening for a total of HUF 2.5 million (USD 9,300). The medals were donated to the Protective Charitative Association (Oltalom Karitatív Egyesület) for auction by various Hungarian notables after the Knight’s Cross of the Order of Merit of the Republic of Hungary was bestowed on Fidesz publicist Zsolt Bayer, an outspoken antisemite. The auction proceeds will be used to purchase 500 pairs of shows for the children of poor families.

The Rev. Gábor Iványi, whose Methodist church established the foundation, told participants that the auction was the idea of Miklós Haraszti who refused to return his medal to the very same person responsible for decorating Bayer in the first place, President János Áder.

Haraszti’s medal, the Middle Cross of the Order of Merit which he received from the late president Ferenc Mádl, fetched HUF 125,000.

“The Bayer case is symptomatic of the spread of Orbanism,” said Haraszti who warned that “Orbanism is conquering Europe.” The former Organization for Security and Co-operation in Europe Representative on Media Freedom also warned that “Poland is getting ready” to follow in Hungary’s footsteps.

The next medal to be auctioned off was that of Róza Hodosán, fetching HUF 100,000.

“I didn’t want to return my award,” said the former member of parliament, who received the medal from former president László Sólyom. “I didn’t want to because I thought that I was given it in a system where those values I’ve represented my entire life and the work that I completed were important to my homeland, and with this little cross signaled to me that it still values it. And still I must return it in order to retain in my heart something from that home that I liked. Before the system change I confidently knew that the system in which I lived was not mine and that it was foreign to me. But my homeland, that was mine,” continued the former SZDSZ politician. “Since 2010 I have once again been exiled by a system–a system that is the enemy of my homeland. But this time I shall remain here in my homeland and wait anew for them to go away,” she said to loud applause.

Iványi’s Middle Cross of the Order of Merit, which he received from the late president Árpad Göncz, was the next to be auctioned off, fetching a record HUF 400,000.

Next to be auctioned was Iványi’s Gold Cross of Merit, which he received from Ferenc Mádl. The new owners, who purchased the medal for HUF 200,000, immediately returned it to Iványi.

Iványi’s third medal, the Middle Cross of the Order of Merit of the Hungarian Republic, which he received from Sólyom, was sold for HUF 300,000.

Next to be auctioned was the Knight’s Cross belonging to Jenő Kaltenbach, former government commissioner for minorities.

“My whole life I’ve always wanted to start an avalanche. This time I was successful,” quipped Kaltenbach, who was the first of 100 notables to return his medal, announcing his intention to do so within hours of Bayer being decorated. His medal fetched HUF 155,000.

The Knight’s Cross of Democratic Coalition European member of parliament Péter Niedermüller was the next to go on the auctioneer’s stump, fetching a mere HUF 55,000.

Next was the medal presented to American-Hungarian Baptist minister József Novák by the Hungarian consular officer in Los Angeles on behalf of former president Pál Schmitt. The medal went for HUF 205,000 after two bidders fought for it.

In an open letter addressed to President Áder, Novák told why he was returning his state award:

“After emptying the private pension funds, you curtailed the jurisdiction of the Constitutional Court for your own purposes. Citing serious abuses, you threw together an ungainly law that made the historical churches dependent on staying in the good graces of those in power, and which reduced my brothers in belief wishing to succeed to serving the interests of the Fidesz-KDNP coalition. You `help` foreign Hungarian bodies by making them dependent on you with funds taken away from those impoverished at home. You influence public opinion by means of roadside incitement, following the communist methods.”

Hungarian businessman and philanthropist András Polgár’s medal was the next to be auctioned off, followed by that of film director János Szász, who praised Iványi for “doing so terribly much for people for whom others do not even raise a word in this country.”

Izolda Macskássy’s medal was auctioned off twice, once for HUF 200,000 and then for HUF 85,000 after the first winner returned it to be sold again.

Upon the conclusion of the auction, Iványi announced that the funds would be used to purchase 500 pairs of shoes for the children of impoverished families.

In a show of solidarity, decorated literary critic Sándor Radnóti, who outright refused to return his medal “to these people”, attended the auction.