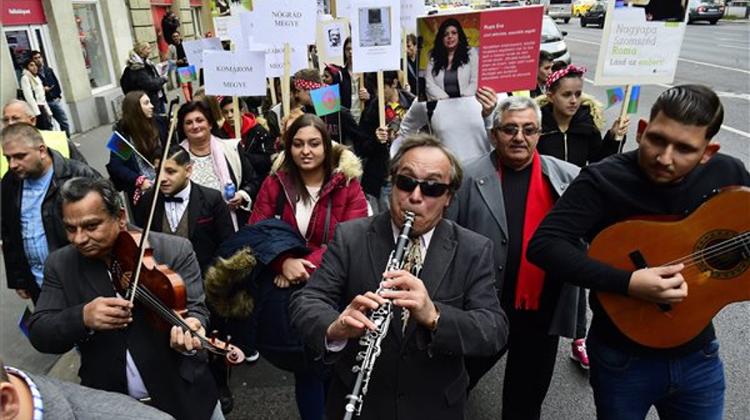 A hundred or so members of Hungary’s 700,000 strong Roma (“gypsy”) minority marched for equal opportunity in Budapest Saturday afternoon on the occasion of Roma Pride Day. Speakers called for Roma solidarity and for equality of opportunity in education and the labor market.

Ide tartozunk! (“We belong here!”) Roma activist Jenő Setét called on everyone to acknowledge that “gypsy lives count.” He called on the Roma community to “force open” the doors of education and the labor market which he says “tightly exclude us from the other side.”

The Roma activist stressed the importance of providing Hungary’s Roma with access to quality education, and condemned the treatment of Roma in Miskolc and Székesfehérvár who have been “cast out” of their council flats.

Roma activist Marian Mandache stressed that Roma are among the most hated groups in Europe—one associated with criminality, violence, and laziness. She said that “while it is more difficult for us to find employment than others, the majority of Roma work and engage in hard physical labor.”

Mandache condemned the media for projecting a negative image of the Roma people in Europe and for spreading prejudice, pointing out that the nationality of offenders is only emphasized in crimes committed by Roma.

“The city belongs to everyone” activist Zsuzsanna Pósfai said that the country was experiencing an existential crisis that especially affects Roma who are denied the opportunity to let or sublet flats because of discrimination.

At the beginning of the event the demonstrators commemorated the Roma heroes of the failed 1956 revolution at the memorial plaque of Ilona Szabó, who was shot dead on October 28th, 1956 on Práter street.

From there they marched along Blaha Lujza square via Üllői street, Múzeum körút, and Rákóczi street chanting “We belong here!,” “Education, not starvation!,” “Dignity for everyone!”, “Segregation is not good for anyone!,” and “School, work, security!”

A number of signs and banners could also be seen proclaiming that “Roma are equal” and “While I know everything about you, you know nothing about me.”