Szijjártó In London: Foreign Investments In Hungary Are ‘Safe’ 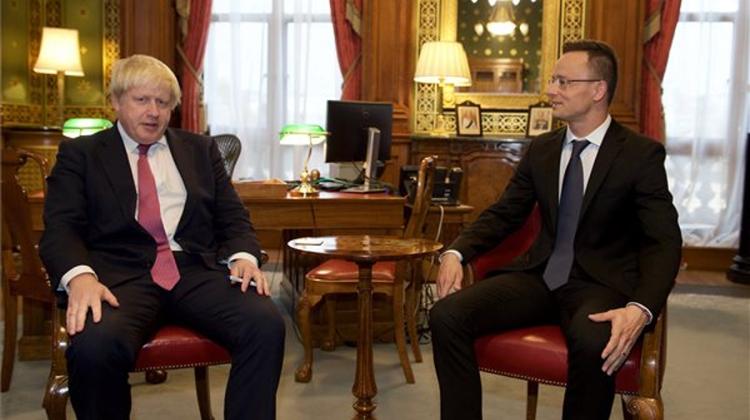 Foreign companies and investors are “totally safe” in Hungary, which is a “very investor-friendly and open country”, Péter Szijjártó, minister of foreign affairs and trade, said in an interview to American business television network CNBC on Wednesday, as part of his visit to London.

Szijjártó said Hungary has the highest FDI proportionate to GDP in central and eastern Europe and the export ratio to GDP is almost 100%. “As far as I understand, British companies are very happy,” he said noting recent investments by BT, BP, Tesco and Vodafone and a strategic cooperation agreement with GlaxoSmithKline Beecham.

He added that the tax regime would be further tailored towards attracting foreign investment. Szijjártó later held talks with Chancellor Phillip Hammond, Foreign Secretary Boris Johnson and David Davis, who is minister in charge of the ministry for exiting the EU.

Speaking to journalists after his talks, Szijjártó said the growth path of the Hungarian economy will be “fundamentally influenced by what kind of substantive agreement arises between the British government and the European Union regarding Britain’s exit from the union.”

He said it was in Hungary’s vital interest that an agreement should come about that guarantees that trade, investment and economic ties are not blocked between Britain and the EU. He said it has to be seen clearly that any kind of obstruction or difficult circumstances arising in EU-British relations could be extremely damaging to the Hungarian economy.

The minister noted that the 771 British companies doing business in Hungary employ some 49,000 people. These companies continuously reinvest in Hungary, and the aim is to speed up those reinvestments, he added.

Szijjártó said he had earlier in the day signed a memorandum to establish a British-Hungarian Business Council with involvement from ten British corporations, including Tesco, British Telecom, BP, GlaxoSmithKline and Provident.

The memorandum was signed at the Hungarian embassy. The establishment of the business council will serve as a guarantee for Hungary that Brexit will not present any barriers to further British investments in the country, Szijjártó said.

He voiced disagreement with the view of “certain European institutions” that have said that the UK should seek a “Norway-style” post-Brexit trade deal with the EU. In Hungary’s view, Britain and the EU should strive for a completely new kind of deal unlike any of the existing ones, the minister insisted.

He argued that the importance of the UK to the EU in terms of economic relations was far greater than that of any other country that has close ties with the bloc.

Szijjártó said Hungary opposed the approach applied by “certain EU institutions” that he said aimed to inflict some kind of “political punishment” on the UK for its decision to leave the bloc.

“There’s no place for hurt feelings here,” Szijjártó said. “Europe and Hungary’s interests lie in maintaining the strongest and freest possible cooperation” between the UK and the EU, he added.

He said he had asked his British partners to support the protection of the rights of Hungarians working in the UK.

Szijjártó said he had not encountered any “rejection” of his request in his talks, but said that it was clear that the issue of immigration was one of the main factors in the British people’s decision to leave the EU.