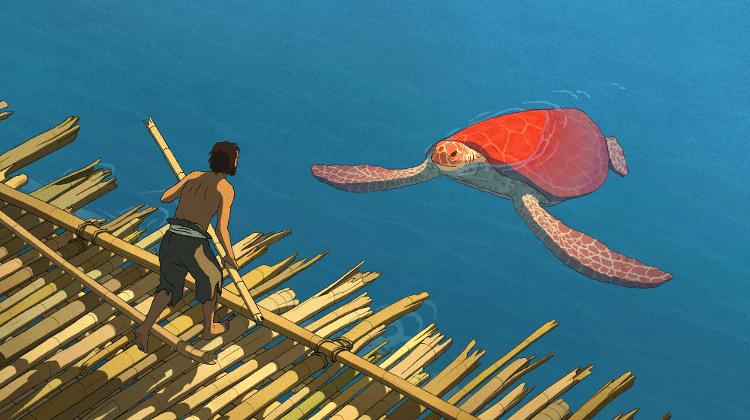 The most anticipated animation event of Budapest this fall, 14th Anilogue International Animation Festival, illuminates the screens of three cinemas -- Urania, Puskin and Art+ -- from November 23rd to 27th in Budapest. Opened by The Red Turtle, the Japanese-French coproduction of Studio Ghibli and Wild Bunch, directed by Oscar-winning Michakl Dudok de Wit, this year's Anilogue brings to town a packed programme. The five festival days deliver the premieres of 13 brand new animated feature films and 200 short films some of them can be watched for free.

This year 13 full-length animation feature films will be presented, 6 of which are in competiton just like 30 short films. The Red Turtle opens Anilogue on November 23, Wednesday at 7pm in Urania. This beautiful, touching dialogue-less film follows the major life stages of a castaway on a deserted tropical island populated by turtles, crabs and birds. In the meanwhile it talks about us, humans being part of a greater unity and about the circle of life

In competition the audience can watch French Jean-Francois Laguionie’s latest animation, Louise by the Shore in which we folow an old lady as a would-be Robinson Crusoe. Will she make it through the winter? In Belgian Jan Bultheel’s Cafard it is August 1914.

While Jean Mordant is away winning the title of World Wrestling Champion in Buenos Aires, his daughter Mimi is raped by German occupiers in Ostend. Jean swears he will avenge this immoral disgrace. The Girl Without Hands was awarded in Annecy with a special prize, Sébastien Laudenbach's new feature is about a daughter of a poor miller who unintentionally sells her to the devil in an attempt to avoid starvation of the whole family.

Psiconautas, the Forgotten Children is a surreal antiutopial fantasy of Spanish Alberto Vázquez and Pedro Rivero. Teenagers Birdboy and Dinky have decided to escape from an island devastated by ecological catastrophe. Directed by Canadian Leanne Pooley 25 April explores the 1915 Gallipoli campaign of World War I, and its impact on New Zealand's cultural identity, via a combination of documentary, fictional narrative, and digital animation. Finally Seoul Station by Korean Yeon Sang-ho follows the initial circumstances of the zombie outbreak at the titular railway station.

The following feature animations will be screened outside the competition. American Penny Lane’s animtional documentary NUTS! is about Dr. John Romulus Brinkley, an eccentric genius who built an empire in Depression-era America with a goat testicle impotence cure and a million watt radio station. Czech puppet animation (without dialogue!) Pat&Mat, follows a couple of friends who face mostly self-made problems, so that they have to solve them by any possible and impossible tools.

In Ghost in the Shell – New Movie when the Prime Minister of Japan is assassinated by a mysterious cyborg, Major Motoko Kusanagi comes up as the prime suspect. The first animated feature of Claude Barras, My Life as a Zucchini is a perfect blend of the oeuvres of Tim Burton and Wes Anderson.

The recently orphaned hero, a young eccentric boy, nicknamed Zucchini, does not only need to find new friends but also to learn to know himself in this unknown situation. In Bill Plympton’s Revengeance a low-rent bounty hunter named Rod Rosse gets entangled in a web of danger when he takes on a job from an ex-biker/ex-wrestler turned U.S. senator named "Deathface." Finally in Canadian Ann Marie Fleming’s Window Horses Rosie Ming, a young Canadian poet, is invited to perform at a Poetry Festival in Shiraz. Once in Iran, she finds herself in the company of poets and Persians, all who tell her stories that force her to confront her past; the Iranian father she assumed abandoned her and the nature of Poetry itself.

In the competition of the short films 30 recent animations take part from 17 countries – including Réka Bucsi’s LOVE. They were selected from 1300 short films. An international jury passes judgement on the competition films. There will also be a 6-hour animation marathon with party-breaks, and an exciting peek into history of animation in Denmark, the country in focus this year.

Outside cinema halls the most inspired members of festival public will enjoy the workshops, roundtables and exhibitions brought to Budapest by the numerous international guests. Last but not least, Rutkai Bori Band brings the youngest festival-goers an experience merging music and animation on the concert of her newest album, Pizsamator.

For the full program visit: http://anilogue.com