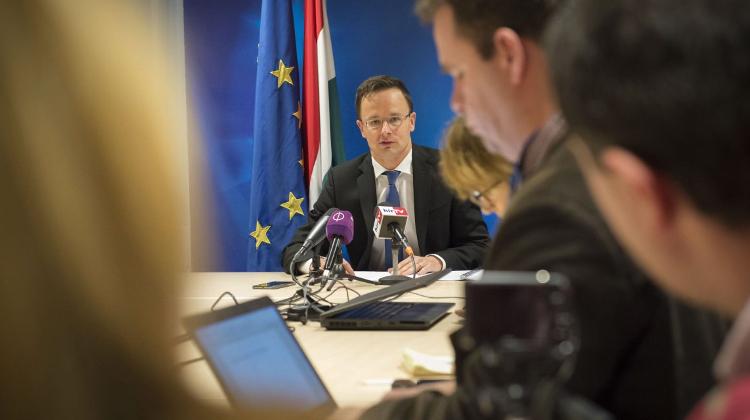 As Foreign Minister Péter Szíjjártó demonstratively absented himself from the meeting where EU foreign ministers discussed the implications of Donald Trump’s presidency on Sunday, columnists across the political spectrum wonder if a more isolationist US would threaten European security.

Hungarian Foreign Minister Péter Szijjártó who (along with UK Foreign Secretary Boris Johnson) skipped the informal dinner said that “Hungary does not participate in the anti-Trump hysteria but rather considers Mr Trump’s election as good news”.

In Magyar Nemzet, Gábor László Zord thinks that European fears over Trump’s victory are highly exaggerated. The conservative analyst suspects that the constitutional checks and balances will severely curtail Donald Trump’s ability to perform a U-turn in foreign affairs. Even if Mr Trump shifts the focus of US foreign policy, Europe will remain the closest ally of the US.

Although Mr Trump may strike a more conciliatory tone with Russia, NATO will not become any less important and Europe’s rearmament will continue, Zord predicts. In conclusion, he recommends that Europe use the opportunity to increase its independence from the US and spend more on its own security.

Népszava’s Róbert Friss criticizes Foreign Minister Szíjjártó for downplaying the threat of Donald Trump’s election for European security. The left-wing columnist fears that if Trump’s presidency brings a rapprochement between the US and Russia, Putin will use the opportunity to strengthen its influence over Central Europe.

On Index, a political analyst signing his articles as Eurologus contends that while Donald Trump’s foreign policy vision divides Europe, it also opens up the possibility of deepening European military and foreign policy cooperation. As Donald Trump hinted in the election campaign that he would not offer unconditional protection to the continent through NATO, Europe will need to strengthen its own defence forces and spend more on the military, Index points out.