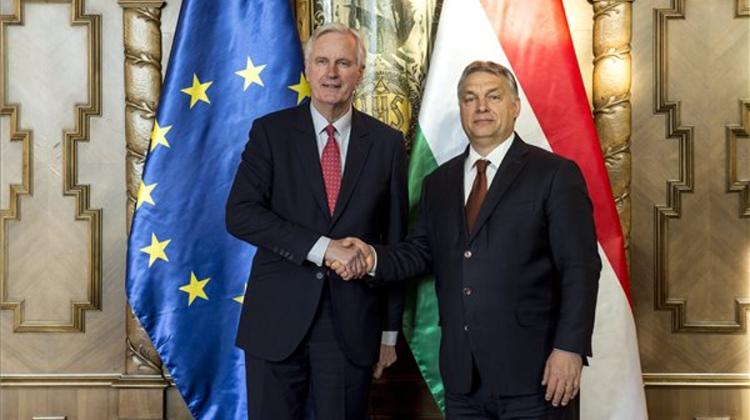 It is Hungary’s best interest to keep relations as tight as possible between the United Kingdom and the European Union after the Brexit, Minister for National Economy Mihály Varga said after having received EU Chief Negotiator Michel Barnier in the Hungarian Parliament.

Hungary is interested in a “fair” Brexit rather than the process being “punitive”, Prime Minister Viktor Orban said during talks with Barnier.

The wish of British voters must be respected, Mihály Varga stated. During exit talks Hungary hopes to come to an agreement that is acceptable for all parties, and which is based on a balance of rights and responsibilities.

The Minister added that in economic terms the best outcome for Hungary would be if, post-Brexit, the United Kingdom kept as many advantages as it could from the openness provided by a common market, among them the close Hungarian-British economic relations.

It is equally important not to restrict the rights of Hungarians living in Great Britain after the country ceases to be an EU member, not to hamper the free movement of goods and services and to maintain conditions for a common market.

The European Council must formulate strategic and political guidelines during the exit talks, the Minister stressed, but Hungary is counting on the expertise and cooperation of the Commission and the common representation of the interest of the EU and member states.

At the meeting, a potential new location of the headquarters of the currently London-based European Medicines Agency and the European Banking Authority was also discussed. Mihály Varga stated that Hungary had been the first of member states that joined the EU in 2004 to have formally declared to welcome EU institutes in the country.

Certain former decisions of the European Council stipulate that post-2004 members and those which do not house such institutes yet must be given advantage in hosting EU offices and agencies. Speaking of the impact of Brexit on the Hungarian economy, Mihály Varga emphasised that this step would bring some opportunities along with obvious foreign trade difficulties.

We want to draw the attention of companies and investors, which are turning away from the United Kingdom to focus on the EU, to come to Hungary, he said. For us, directing FDI aimed at establishing global company headquarters and service hubs to Hungary may be of great potential, the Minister stated.

Orbán: Brexit should be ‘fair’ rather than ‘punitive’ It is crucial for Hungary that Hungarians working or studying in Britain should continue to enjoy their “acquired rights” in future, the prime minister’s press office quoted Orbán as saying. Continued stability for Hungarian employees of British firms in Hungary is also important, the prime minister added.

Orbán and Barnier agreed that the UK’s rights and duties stemming from EU membership should remain unchanged until Brexit. Hungary has an interest in the EU maintaining strong bilateral ties with the UK after Brexit, Orbán said.