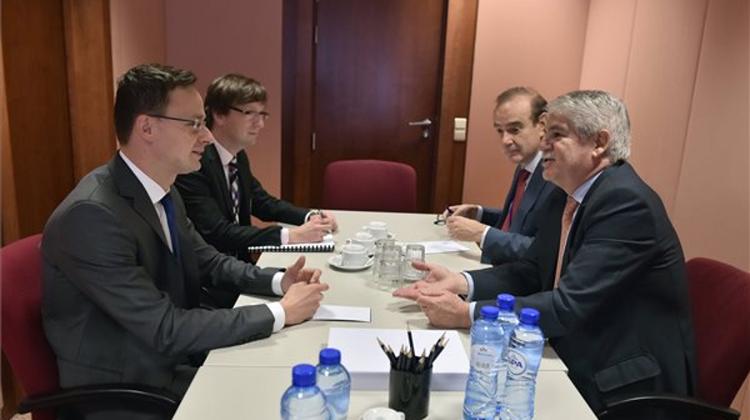 Hungarian Foreign Minister Péter Szijjártó, at a meeting of EU foreign ministers in Brussels, lamented what he called a “lack of progress” in the European Union’s management of the migrant crisis. Each month the topic of migration is brought up at meetings of EU ministers but “nothing ever happens”, Szijjártó told a press conference.

"It is only thanks to a fortunate turn of events that Europe is currently not under serious migration pressure, and not because the EU has found a joint solution to the crisis or because it has taken the necessary measures,” Szijjártó said. In order to permanently resolve the migrant crisis, the EU must declare that “migration is bad and that only legal entry into Europe will be allowed,” he said.

The bloc should also declare that “anyone who enters [Europe] illegally will be sent back to their country of origin,” he added. The EU must also agree to aim to permanently relieve the continent of migration pressure, Szijjártó added. When it comes to forging partnership agreements for handling migration, the EU is onesided in its approach, he said.

On the one hand, pacts should not only be signed with African countries but also with those of the Middle East and Asia, he said. On the other, it is a cause for concern that the EU is focusing on the Mediterranean migrant route while neglecting the western Balkan one, he added.

The EU should sign a partnership agreement with Afghanistan and Pakistan as well as with countries in the vicinity of Syria, such as Iraq, Lebanon and Jordan, he said. Szijjártó said the EU must pursue two goals in its policy with Africa: in addition to tapping economic opportunities, it must keep the issue of migration on the agenda.

“Conditionality is the key,” he said, adding that African countries that receive EU development funds should be expected to implement changes that stop migration from their shores.

He said the EU foreign ministers were planning to approve a statement at Monday’s meeting condemning Egyptian leaders for their treatment of civil organisations. If the system that currently ensures stability in Egypt is shaken, millions could set off towards Europe, he warned.

It is also for this reason that the EU “should not put critical pressure on Turkey”, he added. The ministers also discussed the issue of Syria at the foreign council meeting.

Szijjártó said a deal between the US and Russia was vital for resolving the Syrian civil war, which is stoking the migration crisis.