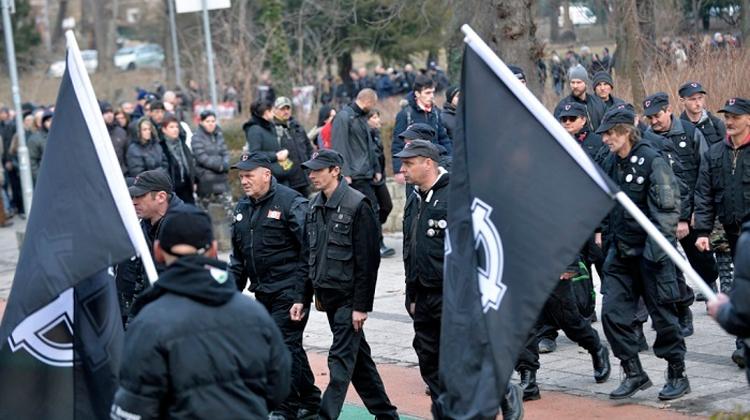 President of the Hungarian Federation of Jewish Communities (MAZSIHISZ) András Heisler finds “unacceptable” the demonstrations that took place in Budapest and other cities around the country last weekend celebrating what the Hungarian extreme-right calls the “Day of Honor”.

This commemorates the February 11, 1945 attempt by Nazi and Hungarian fascist army divisions to break through the Soviet blockade surrounding the Buda Castle during the Red Army’s siege of Budapest.

Some 600 black-clad neo-Nazis and sympathizers of Hungary’s collaborationist Arrow Cross party appeared at Budapest’s Városmajor park Saturday to commemorate the fascist victims of the fight against the “red scum.” Numerous extreme-right organizations were present, including both German and Italian neo-Nazi groups, according to liberal daily Népszava.

So were members of the militant fascist group Betyársereg (Army of Highwaymen) and the group’s former leader Zsolt Tyirityán, who insisted that racial and national consciousness are necessary to combat the “sick and perverse people” who have “made Europe unlivable and defenseless.”

Tyirityán, a personal friend of Jobbik chairman Gábor Vona, praised the Nazi party’s elite paramilitary organization, shouting “Appreciation and my respect to the Waffen SS! Glory to the Waffen SS!”

Day of Honor celebrations have been taking place since 2007, and police and courts have sporadically banned the celebration or pushed it to private property and city outskirts, but enforcement is erratic: last year the demonstration was held at Buda Castle’s central Kapisztrán square, and this year’s Városmajor demonstration was allowed in the middle of the city in its most imortant park.

The display of Nazi imagery such as swastikas or SS emblems is illegal in Hungary.
Orbán and Heisler also reportedly discussed the possibility of government assistance in rebuilding a Zugló synagogue which burned down in October, as well as government policy for assisting Hungarian-speaking Jews abroad.