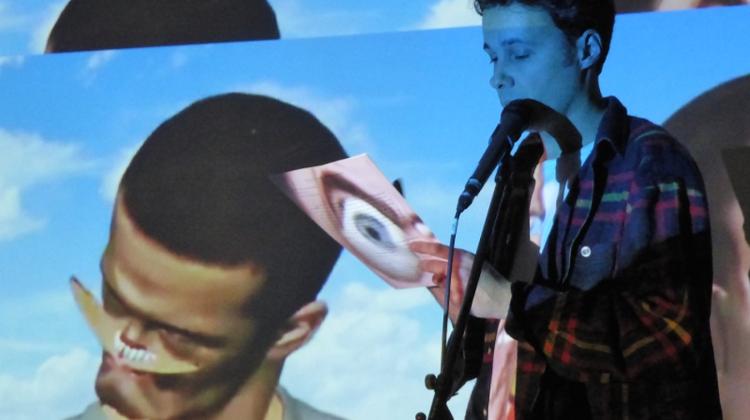 Pedro Barateiro: The Sad Savages - In his lecture-performance Barateiro creates a parallel between two events happening at the same place; the cutting of palm trees caused by a plague and the financial crisis, especially its effect on Southern EU countries like Portugal, Spain and Greece.

The lecture implements references from various fields; form economy and philosophy, through Tumblr and Facebook, until Barateiro’s own artistic work and his book covers for a fictional publishing house. In his lecture he examines the relation between the idea of melancholia and psycho-sociologic alienation, between intention and imitation as social acts, between the effects of colonial thinking and the forces of capitalism, or the relation of the words in the title ‘sad’ and ‘savage’.

Pedro Barateiro’s (1979) background in drawing, painting and writing was expanded by his education with an MA at Malmö Art Academy, Lund University, Sweden; and at the Independent Study Program in Visual Arts at Maumaus – School of Visual Arts, Lisbon.

“An artist pointing at an other artist”.

András Gálik (1970) and Bálint Havas (1971) began their collaboration in the late 1990. Through films, installations and a wide variety of media, the Hungarian artist duo Little Warsaw addresses historical memory and confronts personal encounters with social experience.

At the same time, they examine the role of the artist not only as a producer of images, objects or situations but also as an agent of the context he/she is embedded in.

Thus, through their manifold investigations, the artwork itself is also presented as a subject of political, sociological and ideological changes.

In recent years, the personal perspective came more and more into the foreground in their latest works, where their very own micro histories, family legends intermingle with greater political events and social changes. In this manner, the radical gestures of interventions of their previous works are often complemented with a more poetic way of expression.

Their projects have been included in the 2nd Berlin Biennial, the 1st and 3rd Prague Biennial, in Manifesta 7 in Roverto, in the 12th Bienal de Cuenca, as well as in numerous group exhibitions throughout the world; e.g. at Stedelijk Museum, Amsterdam; Singapore History Museum, Apexart New York, Mathaf Doha, Qatar; Modern Art Institute, Valencia and Institut du Monde Arabe, Paris.