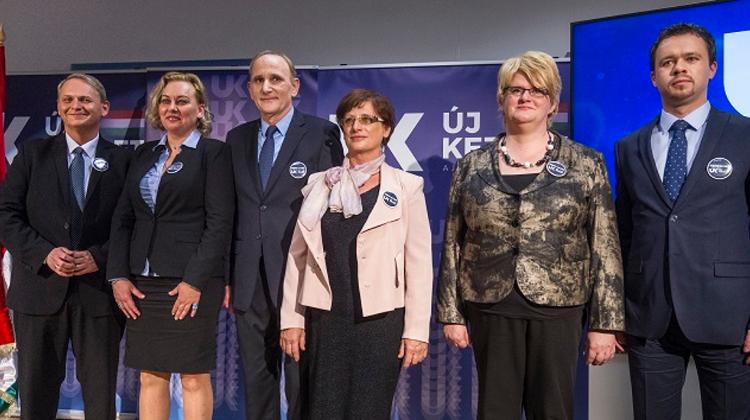 Új Kezdet (New Start) has formally announced it will be stepping into the national political arena as a new party. At a press conference held Saturday morning in Budapest, party chairman and longtime Gödöllő mayor György Gémesi (above, third from left) unveiled the party’s platform and introduced its executive board (pictured).

According to its platform, the new party

• is center-right,
• has local mayors as its members,
• seeks to represent Hungary’s “silent majority”,
• will submit a referendum question which would aim to force every significant Hungarian politician (members of government, MPs and mayors) from the past 30 years AND their immediate family members to undergo a wealth assessment audit from the tax authority,
• aims to win the 2018 national election, municipal elections and European Parliament elections.

“Before I introduce the party, allow me to share some of why we are here today and what we have been working to address over the past year,” Gémesi said, pointing at the large display screen in the room which played the following video.

The video above was recorded during the government’s March 15 national holiday commemoration events. It shows a scuffle between protesters and government sympathizers, which involved foul language, outlandish accusations and physical altercations.

“I do not think there is anyone in this room who thinks that this is acceptable,” Gémesi said of the video. “It’s not right and there are many other things in this country that just aren’t right. We have come to the point in this country where people clash in the street. People are fighting each other in the street, trying to convince the other that they are right.”

According to Gémesi, events such as those on March 15 prompted Új Kezdet’s founders to start a movement, “the kind of movement that is based on commonsense and is capable of identifying a national minimum that many can agree with. We do not want the kind of hostility and squabbling that was depicted in this video, rather a cohesion, integration and framework that allows people to think together.”

“And with this, the first phases of the Common Sense Revolution was drawn to a close,” Gémesi said at the Saturday press conference. “So where to from here? If these points have so many supporters, and if the silent majority of Hungary likes what we have come up with, then we must take the next step and take these principles to the next level. Today, the only way to do this is by stepping onto the political scene with a political group eager and capable of turning these ideas into practice.

“We must emphasize that we have no desire to become involved in the bickering between various political factions. That is not how Új Kezdet came to be. We would like to show that we are an alternative to the current government, that we are capable of putting the 12 points into action, and that we will jump in the race for the national elections, the municipal elections and the European Parliament elections.”

When news of the new party started to spread, so too did “the smear campaigns that unfortunately are now commonplace when a new political power steps onto the stage”, he said. “I would just like to let everyone know that this type of behavior will not stop us. We will continue along the course that we have set for ourselves.”

Gémesi immediately dispelled any rumors that he is the only face of Új Kezdet, and continued by introducing the party’s executive board and chairman of its election committee.

Új Kezdet’s band of local leaders “carry the burdens of the people and have empathy for them, and they will never forget where they came from”.

Referring to Fidesz-KDNP’s dismantling of municipal independence in Hungary, Gémesi said he was shocked that the country’s mayors (some 80 of them who served in the National Assembly at the time of the reforms) assisted in the process.

“[The municipalities] represent the other side of Hungary’s democratic system. We too are responsible for 10 million people. We too are trusted by the voters, we are also turned to when the citizens need help. So why then did [the National Assembly] feel that the municipalities are unnecessary? They are responsibilities that are the most effectively, transparently and best performed on the local level, together with the people that we live with,” Gémesi said.

According to the party chairman, Új Kezdet will not get its fame from “political celebrities” who have bounced around between three or more parties and who cannot find the solutions for problems, whose involvement in politics is simply a matter of income. Gémesi promised that his party is made up of “those who are out working in the field and know what is happening in this country.”

The party’s executive board is made up of local mayors, and women outnumber men 3 to 2. The board includes

Parties and politicians often talk about corruption but no one seems to be doing anything about it, Gémesi said.
“We have decided to launch a referendum to see what the Hungarian people want — not through the System of National Cooperation or a letter through the post, but instead proposed through a concrete question,” he continued. The referendum question would be,

“Do you agree that the National Assembly should author legislation which requires that the National Tax and Customs Authority (NAV) perform a wealth audit for every person and their immediate relatives who has served as a member of the Hungarian government, Member of Parliament, or mayor between March 15th, 1987, and March 15th, 2017? And that in the event that the National Tax and Customs Authority finds sanctionable improprieties with any such person, that person and their immediate relatives be barred for five years from public office and any occupation related to the use of public funds?”

“I know these are strong words. But for once in this country, if we would like to work in the interest of the country with respect and honor, we must do this for a new start,” Gémesi said, adding that he and his fellow mayors would also be subject to such an audit, something they welcomed.

“The moral and ethical advancement of this country, the rebuilding of the economy, fixing the problems in healthcare, the problems in education and the issues affecting the youth, none of this can be addressed in a correct manner if we do not lay the proper foundations down. This is the point of the new start. And we invite all Hungarian citizens, anyone who is happy to help, be that with signature gathering or spreading the news, to help with this,” Gémesi said.

12 points of the Common Sense Revolution

A pamphlet outlining Új Kezdet’s platform was made available to the press during the event, and includes a breakdown of the 12 points of the Common Sense Revolution. (A bullet-point summary of the 12 points follows.)

2. Rule of law and equal treatment under the law
• The foundations for the rule of law must be remade.
• Everyone should be treated equally under the law.
• There is a need for state agencies, law enforcement, prosecutors and courts that operate professionally, free of influence from political or personal influence.

3. The right to free speech
• Government influence over public media must end.
• Rights to free speech and freedom to access balanced information must be ensured through proper legal and market conditions, especially when it comes to the clean distribution of state advertising funds.
• A framework must be established for a media environment that provides space for real social discourse to take place.

4. Healthcare and social care worthy of being called humane, and dignity for the elderly
• Everyone must have access to modern healthcare.
• Those working in healthcare are provided a clean income worthy of their responsibility and skills.
• A social care system must be created that focuses on those who need it most.
• The dignity of the elderly must also be guaranteed.

5. Education must provide applied knowledge
• A Ministry of Education must be created and funded.
• The autonomy of higher education institutions must be restored.
• The needs of schools must be reassessed, and local governments should have the right to play a role in education.
• The education system should prepare everyone for lifelong learning.
• Special-needs students must have special education opportunities.

6. An attractive homeland for the youth and families
• A secure and promising community must be provided for – and with the assistance of – Hungarian youth, to provide them with a positive outlook for the future in Hungary.
• The youth need a place where they can believe they can accomplish things if they are talented and work hard.
• Family subsidies must continue and rental properties must be built to assist those in need.

8. A livable countryside
• Security is a prerequisite condition that must be ensured for a livable countryside.
• A more professional and efficient agricultural system is needed.
• Access to EU funding is needed and a targeted system needs to be put in place to ensure that competitiveness is improving in the right areas.
• The environment and historical landmarks must be protected.

9. Positive and predictable environment for businesses
• Small- and medium-sized businesses should be given access to national and EU funds in a manner decided by importance to development, not party preference.
• The public employment scheme must be reformed.
• Wage reforms must be made to make coming home more attractive for Hungarian professionals working abroad.
• Legal and tax predictability is needed.
• There needs to be respect for the sanctity of private property.

10. Support and security for professional organizations and NGOs, and churches that operate independently of government influence
• An unbiased grant system is needed which allows these organizations to preserve their autonomy while also allowing them to perform their work.
• A new start is needed where the churches are respected members of society and are not held captive by their dependence on state subsidies.

11. Peace in society and a more European Hungary!
• The government’s constant scapegoating, hate-mongering, discrimination and expensive state propaganda lying must stop.
• The space for discourse based on mutual respect must be restored.

12. New Start
• The New Start’s program must be laid with a new spirit, one that has a foundation built on love of the homeland and love for our fellow countrymen.