Áder Sworn In For Second Term As Hungary’s President 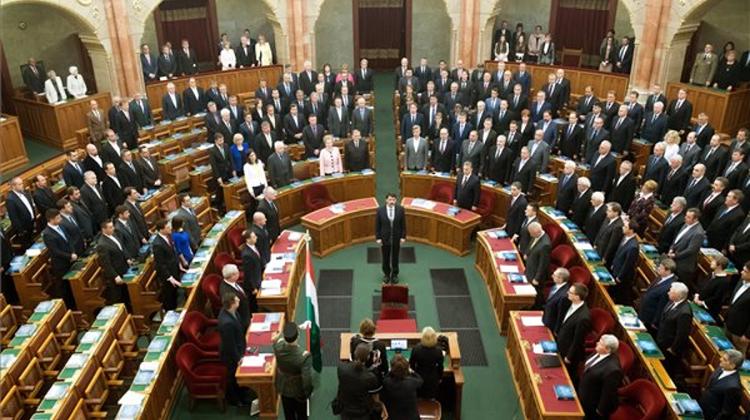 President János Áder was sworn into office Monday, marking the start of his second consecutive term as President of Hungary. A small group of opposition protesters, led by Együtt politician Péter Juhász, held a demonstration outside parliament as Áder took the oath.

In his speech before the Parliament, Áder addressed the increasingly hostile environment that has emerged in Hungarian public life.

“Seeing what has transpired in public discourse in recent months, I would like to address the year ahead of us,” he said. “I am convinced that if things continue along this path, then we will surely destroy everything that we have built together since 1990. We have called everything into question. Every agreement, however tacit, is being disregarded. We are crossing every line.”

Áder brought up the Great Compromise of 1867 as a reference point for bringing the country together.

“It would be great if we could all just agree on three things: firstly, that we are Europeans. Secondly, that we are all members of the Hungarian nation. And thirdly, that we all desire to live clean, respectable, and calm lives,” he said.

Áder took jabs at the media and politicians, calling on them to leave the family members of politicians out of the public discourse.

“If the tabloid media is unable to restrain itself, we must follow it down that path and use families and children as [ammunition] in political attacks,” he said.

While Hungary’s pro-government media has on numerous occasions violated the privacy of opposition politicians and civil activists, Áder recently found his family caught up in the political discourse when news emerged that his own daughter, and that of Prime Minister Viktor Orbán, attend or attended universities abroad that operate in a manner similar to Central European University. When Áder signed Lex CEU into law, he approved legislation which would forbid CEU from offering Hungarian and foreign students the same opportunities that his own daughter enjoys.

In his comments to Parliament, Áder said public discourse in Hungary has “dramatically” worsened in recent times.
“I do not want to dole out blame right here and now,” he said. “But due to political considerations, the responsibility is always greater for the governing parties. It is no use trying to figure out who started it, who was the first to be nasty, who crossed the line first. There is a shared responsibility for the current state of public discourse. And there is a shared responsibility moving forward. There is one year until the election, and until then I am certain the majority of voters do not want to sit on top of a volcano ready to erupt,” Áder said.

Áder as a President

In 2015, after the death of Hungary’s first democratically-elected President Árpád Göncz, a poll was released that found Áder to be the second-most disliked President of the Republic of Hungary (following behind Pál Schmitt who was forced to resign in 2012 after serving for only two years). Göncz’s popularity has been unmatched since Hungary’s democratic transition of 1989/1990.

A Medián poll published last week by HVG found that Áder’s popularity has declined 11 points in recent months — a drop attributed to his “uncritical signing” into law of Lex CEU. Áder’s decision to approve the controversial legislation prompted protests around Budapest, and popularized a chant against him in which protesters refer to “Mustached Crap”.

According to a statement released by the Office of the President to Hungary’s state-owned news service MTI, Áder has signed 998 of the 1030 bills that have landed on his desk since becoming president in 2012. He sent back 28 bills to the National Assembly for more debate, and referred five to the Constitutional Court for review. Áder also signed off on granting Hungarian citizenship to more than 655,000 extra-territorial Hungarians, and issued 67 pardons after reviewing more than 3,700 cases.

His critics argue that the Fidesz founder has done little beyond catering to the legislative will of the country’s ruling party. Most recently, Áder’s approval of Lex CEU prompted the European Commission to initiate the first steps of an infringement proceeding, informing the Hungarian government that the law is incompatible with EU law.