New Far-Right Party On The Horizon? 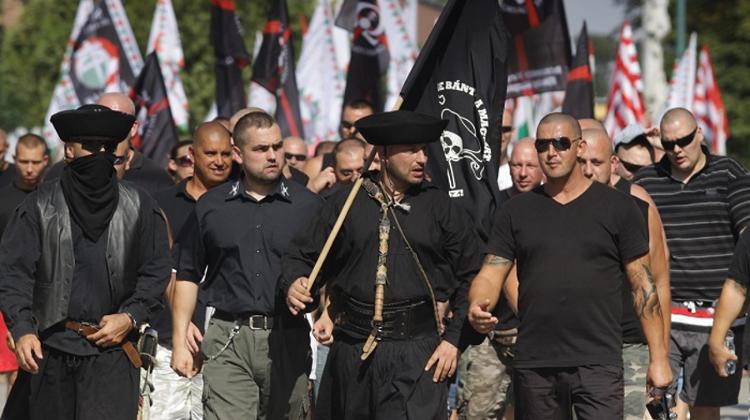 A new far-right party could be on the horizon in Hungary, reports index.hu. According to the online daily, a number of disparate groups are in the process of forming a new extreme-right movement which Hungary’s pro-government media has been eager to laud as a challenger to Jobbik.

Some of the groups associated with the movement believe Hungary needs a new far-right political player to counter Jobbik’s moderating shift to a people’s party. The movement is planning its debut for July 8.

The pillars of this movement index.hu reports that there are at least three far-right groups involved:

All three groups are established in Hungary’s far-right scene. Outlaws’ Army is an extremely violent extremist group. The Érpatak Model group is comprised primarily of municipal leaders in rural Hungary who share the same vision for a far-right racist social order. Identitesz is a newer movement of far-right college students, founded in September 2015.

Based on numerous media reports (together with photographs and shared press conferences), there was always a tacit cooperation between Jobbik and the Outlaws’ Army. This relationship was downplayed in recent years as Jobbik tried to moderate its own public image into that of a people’s party.

Outlaws’ Army leader Zsolt Tyirityán told index.hu: “Hungary needs a new far-right-wing political player. We are not yet contemplating whether to take part in the election, that’s still too far away. For the time being, we’re only assessing the field.”

But Orosz is disillusioned by Jobbik’s attempt to bring itself into the political center. In February, Orosz told atv.hu that he was growing tired of Jobbik’s maneuvering.

The far-right mayor told index.hu that the time has come for people to start thinking about starting a new party that represents Christian conservative, right-wing values, because neither Fidesz nor Jobbik is doing so.

According to Orosz, the only movements on the political right are in the vein of the Fidesz-tied, pro-government Civil Unity Forum (Civil Összefogás Fórum), which he considers to be fake. That is why he and Outlaws’ Army leader Zsolt Tyirityán teamed up to start a new movement, one that Identitesz joined later.

According to Orosz, this movement is focused on dealing with social problems that are swept under the rug, such as Hungarian-Gypsy relations and the migration issue. He believes that Fidesz’s Roma policies have failed, and its handling of the migration issue is flawed because the focus is on religion rather than race.

“People of foreign races need to live in their own homelands — and that is not a question of religion,” Orsz told index.hu. “The Islamic State has nothing to do with Islam, it only tarnishes the reputation of Islam. It only wants the international media propaganda to drum up hate against Islam. But here, the problem isn’t with Islam, [the problem is with] an unregulated race. These races that are foreign to Europe can only be integrated by Islam, and only in their homelands.”

Regarding the government’s border protection policies, Orosz says it simply isn’t enough. Instead of using a fence, he suggests using lethal force, that is, shooting people coming across the border.

In March, Identitesz announced that it would formally step into the political scene. The announcement was made by the group’s president, Balázs László, during an interview with pro-government Echo TV.

According to László, the group was originally founded in response to what its members felt was an overly-liberal environment in Hungary’s colleges.

László did not tell Index whether his group would form into a party, but in a March interview with Budapest Beacon contributor Lili Bayer he said Identitesz would form a party this summer and run in the 2018 elections. (Interview audio below. Fun fact: Jim Dowson was also present at the event where Lili Bayer interviewed László. Dowson had relocated to Hungary recently, and is known for his support of Russian President Vladimir Putin and far-right movements. It was reported today that Dowson was declared a persona non grata in Hungary.)

László told Index: “July 8 will be the awakening of a new political power, in which Hungarian ethnic self-defense and right-wing [values] will stand together in unity.”

Pro-government media loves this, Gábor Vona won’t concern himself with it

According to index.hu, pro-government media has been quick to proclaim this evolving movement as a challenger to Jobbik (Magyar Idők, Figyelő, 888.hu).

But Jobbik chairman Gábor Vona tells Index.hu that he isn’t concerned about the movement.

According to Vona, “anyone who slams Jobbik can become a star in the Fidesz media.”