After Andorra’s Fall, Bernd Storck To Continue In Current Roles At MLSZ 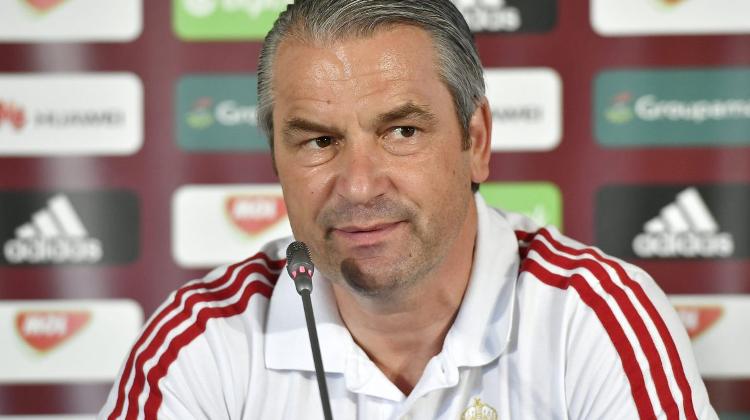 Hungary head coach Bernd Storck will continue in his current roles after a meeting with the Hungarian Football Association (MLSZ) leadership on Thursday 15th June.

During the course of its work MLSZ would like to achieve its long-term, strategically planned aims which underpin its decisions. Since 2010 the Hungarian men’s national team has gradually improved on the international stage. The development started by a previous head coach Sándor Egervári was speeded up by Pál Dárdai and turned into success by Bernd Storck.

The qualification for Euro 2016 and the group win in France was Hungarian football’s greatest achievement in decades. The national team has been unable to overcome the challenges presented in this World Cup-qualifying campaign. MLSZ believes in executing systematic, professional work in the interests of a long-term, strategic plan.

Defining and guaranteeing terms is easier in many areas than in connection with the leadership of the men’s national team which generates the greatest interest.

Between 2010 and 2016 the following developments were made under MLSZ’s leadership in connection with the national team and with the help of several head coaches. In July 2010 Sándor Egervári, one of the country’s most successful domest coaches, became the national team’s head coach having previously won Hungarian league titles with MTK in 1999 and 2003 and Dunaferr in 2000.

In addition, he had already led the Under 20 national team to the bronze medal at the 2009 FIFA U20 World Cup in Egypt.

Egervári’s tenure lasted three years and three months before he resigned in the wake of the 8-1 loss away to the Netherlands. The team had steadily welcomed more and more new faces, at least two young players making their international debuts in each year of his reign.

The national team took several steps forward during his stewardship, finishing third in its qualifying groups for both the European Championship and World Cup. Indeed had the current rules applied to the Euro qualifying campaign, third place would have earned the team a play-off place for qualification to the finals.

Following Egervári in the job was Attila Pintér but he led the squad in only one competitive match so his stint is hard to realistically evaluate. The multiple Hungarian league champion and cup-winning coach carried out his duties with gusto and dedication but in the interests of success he was not able to separate himself from the circumstances created by the negative external perception of his personality.

As a consequence and despite the strategic plan in place, it became evident that MLSZ would need to make an intervention and decision which it would not normally have expected to make.

Formerly a player with 15 years’ experience in the German Bundesliga, 61-times capped Hungarian international Pál Dárdai remained a Hertha BSC youth coach when he took the reins as national-team head coach in late 2014. Under his leadership the team’s game solidified, each match being characterised by discipline, organisation, precision and self-confidence.

Tempo in training and his method of motivation were new in Hungarian football. Primarily, Dárdai trusted the players who had already proved themselves and therefore brought Gábor Király back into the international fold. Although MLSZ would gladly have kept Dárdai for a long time, the federation accepted his wish to return to Hertha BSC to focus on his position there as full-time head coach and thus he exited his role of national-team supremo.

In his place and tasked with continuing the work already started, MLSZ brought in their incumbent Sporting Director Bernd Storck. The German coach had proved as the head of the national youth teams that he could arrange appropriate preparation and with courageous leadership and effective football fully develop Hungarian talent.

Storck proved this at full international level too when, after Attila Pintér (one match) and Pál Dárdai (five matches), he led Hungary in their final four matches to a third-place finish in their qualifying group.

The head coach successfully implemented the principles of the qualifying campaign thus far and assumed full responsibility with his own backroom staff for the play-off against Norway, both legs of which were won as qualification for the European Championship was secured, and all the while he was starting to integrate young players into the team.

The Hungarian national team had therefore once again earned the right to appear at the European Championship for the first time in 44 years but it also performed outstandingly at the tournament. Storck had, similarly to Pál Dárdai, played a large number of youngsters and with the help of established players had produced a stable, disciplined style of play in achieving meaningful and more successful results.

The team finished top of its Euro 2016 group, scoring five goals in the process with every outfield squad member given an opportunity by Storck to step on to the field of play. Hungary finished the year of 2016 in 26th place in the FIFA world rankings which can be said to have been a huge success in comparison to previous years, at the same time the downturn in form towards the end of the year indicating that Hungarian football’s competitiveness had been exaggerated by the results achieved in France.

One point was garnered in the Faroe Islands with the display engendering particular disappointment, after which the team’s results were largely as could have been predicted, albeit in difficult games.

Support for the team was accompanied with mild criticism, although it was obvious that there would be challenges awaiting the whole squad including the older players on recongregating after the Euro campaign because replacing those personalities with great international experience is not a task which can be achieved momentarily.

In summary, the autumn and spring World Cup qualifiers largely went according to form on paper; Hungary beat the supposedly weaker national teams but suffered defeats to those opponents ranked higher. Following the clash against Portugal it became clear that Hungary only had a mathematical chance of qualifying for the 2018 World Cup, a tournament harder to reach because there are only 13 places on offer for European teams.

Therefore, in the interest of a successful qualification for the 2020 European Championship – and because there are limited opportunities for a coach to experiment – it could be possible and justified to bring in and test new players.

Storck selected a significantly younger squad for the game against Andorra even without considering those domestically-based players who will soon start European campaigns with their clubs, for example calling up Dominik Szoboszlai who reached the last eight of the Under 17 Euros with Hungary last month and Under 19 international Bence Tóth.

However, neither the inclusion of all these youngsters nor the absence of eight squad members through injury can excuse Hungary’s defeat to a largely amateur Andorra side which is ranked 150 places below them in the FIFA rankings. In this match Storck’s national team showed no signs of their earlier style of play, nor was there any feeling of a balance between the older and younger footballers, something which is Mr Storck’s error.

During his time with Hungary, Bernd Storck has proved hie could get the best out of his teams in competitive circumstances such as the U20 World Cup and the Euro 2016 play-offs and finals tournament in France. In the meantime he was not just successful but he also achieved strategic goals at the same time, striving both to integrate young players and develop the national team’s style of play.

Bearing in mind that there is little time before the next World Cup qualifier in August and minimal opportunity for preparations to be made, while on the other hand there being plenty of time before the Euro 2020 qualifiers start, MLSZ has decided that on the basis of results achieved during the course of his earlier efforts Bernd Storck will receive a second chance and can continue his work.

This applies to his roles as head coach of the men’s national team and as sporting director too, but these will be subject to more stringent and regular scrutiny and he will have to establish wider professional communication.

Besides this, the MLSZ presidium also made the following decisions:
1. Match tickets for the next three World Cup qualifiers at home will cost 1,000 HUF each and for those with season tickets, the difference in the prices they’ve already paid will be refunded.
2. MLSZ will adjust the principles of distribution of funds which will finance youth football with immediate effect based on a productivity index.

According to this, youth clubs, academies, reginal centres or even small associations will be recognised in a uniform system based on the same conditions in proportion to the level the players developed by them eventually reach within professional football.