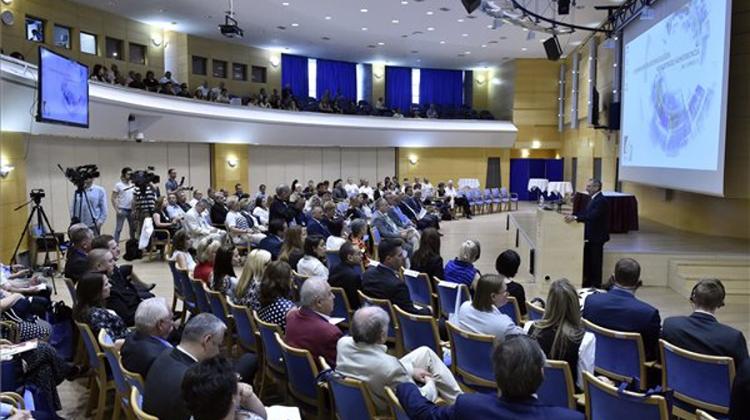 Members of the ministerial conference of the Salzburg Forum held in Budapest discussed issues around migration, border control and security. The Salzburg Forum partnership was launched on an Austrian initiative in 2000 and its members are Austria, Bulgaria, Croatia, the Czech Republic, Hungary, Poland, Romania, Slovakia and Slovenia.

Sándor Pintér, Hungary’s interior minister, told an international press conference that security had grown in the past two years but efforts must be made to maintain that level of security. Participants agreed that protection of the external borders of the European Union should be strengthened, while data on migrants entering the bloc should be updated, monitored and shared among the forum’s partners without delay.

They agreed that the forum’s members would help each other if need be in border protection operations under the coordination of Frontex, the EU’s border protection agency. The participants also agreed to support dispatching Frontex units in Serbia and Macedonia.

Pintér noted that the Austrian partner had put forward an action plan which members hope can be adopted under the forum’s upcoming Polish presidency. Wilhelm Sandrisser of the Austrian interior ministry said they were proud of the forum’s achievements and expressed hope that their action plan would be implemented. Jakub Skiba, the Polish interior ministry’s state secretary, said that although Poland is less exposed to illegal migration, the country is fully aware of the problems it has created.

He said the forum’s members must prepare for a more intensive flow of migrants into Europe along the western-Balkan route. Valentin Radev, Bulgaria’s interior minister, welcomed constructive talks during the conference. He said he expected the progress made at the conference to help Europe identify measures needed to eliminate illegal migration.

Damir Trut, a deputy minister of Croatia, said his country’s experience in providing for the safety of those visiting the country had been shared with the conference’s participants. Jiří Nováček, deputy minister for domestic security of the Czech Republic, noted that the forum’s members had discussed EU asylum rules as well and agreed that the “automatic” redistribution of migrants was “an unnatural” method of managing the migration crisis.

Robert Marin, a state secretary of Romania, highlighted the fight against terrorism and data sharing among the forum’s members as the two most important topics discussed. Andrej Spenga, a state secy of Slovenia, emphasised the importance of regional cooperation.

Addressing a press conference with participants in the Friends of Salzburg Forum initiative, Pintér said those countries were indispensable in efforts aimed at stemming illegal migration. He added that countries of that group are considered safe states according to the European Union’s criteria.

Oliver Spasovski, Macedonia’s interior minister, thanked the contribution of the Forum’s members to his country’s efforts in tackling the migration crisis. He urged cooperation and solidarity in global challenges posed by terrorism.

Miloslav Milickovic, Serbia’s state secretary, emphasised the Salzburg Forum’s key role in ensuring regional stability. There are more than 6,000 migrants currently staying in Serbia, he said, adding that his country was doing its utmost to provide them humane care in line with EU regulations and principles set by the forum.

Dragan Mektić, Bosnia-Herzegovina’s domestic security minister, thanked the opportunity for his country to be a partner in cooperation with the forum. Bosnia-Herzegovina strives to be included in the European security system, he said.