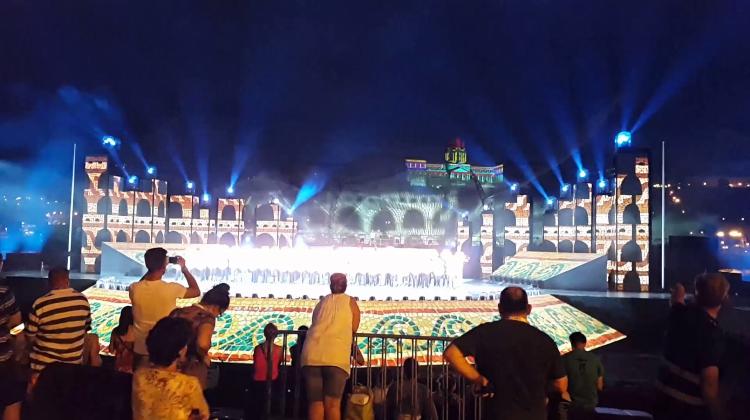 The 17th FINA World Championships – the greatest sporting event that Hungary has ever had the privilege to host - will kick off at 9pm this Friday with a Grand Opening Ceremony. Read on for details and to see an Opening Ceremony Rehearsal video.

The ceremony will be held on four 80 x 10 meter large floating stages on the Pest side of the Chain Bridge. Along with 500 celebrated artists, spectacular fireworks, and various cultural, fashion and sporting performances, the organisers have invited American rapper CeeLo Green to headline the opening event in the heart of Budapest.

It can be watched on large projector screens at the Erzsébet Bridge, and from the Budapest 2017 Aquatics Fan Parks: at the Buda and Pest Danube Quays, the Danube Arena, and at the Margaret Island FINA venues, as well as on TV.

The competition venues are located in Budapest at the Dagály Aquatics Complex - also known as the Danube Arena and at the Alfréd Hajós National Swimming Stadium, and also open water swimming events will be held at Lake Balaton at Balatonfüred.

These aqua world champs will welcome over 2500 athletes, and will end on July 30 with a closing ceremony in the Papp László Sport Arena after the last race.

Csaba Káel, the Principal Director of the opening (and closing) ceremony, is quoted as recently saying:

“To implement a performance of this size on the Danube transcends anything before and requires enormous preparedness. We are proud of our sportsmen, observed by amazement by the whole world for their extraordinary performance, and of our artists who are ambassadors of our Hungarian culture. In the opening and the closing ceremony we pay homage to the common faith, devotion and talent of our sportsmen and artists.

The fact that in the heart of Budapest the Danube is providing place for the performance before the eyes of inhabitants and foreign visitors is unique in the whole world: guests can have a chance to see behind the curtains of an amazing performance combining various arts as one.”