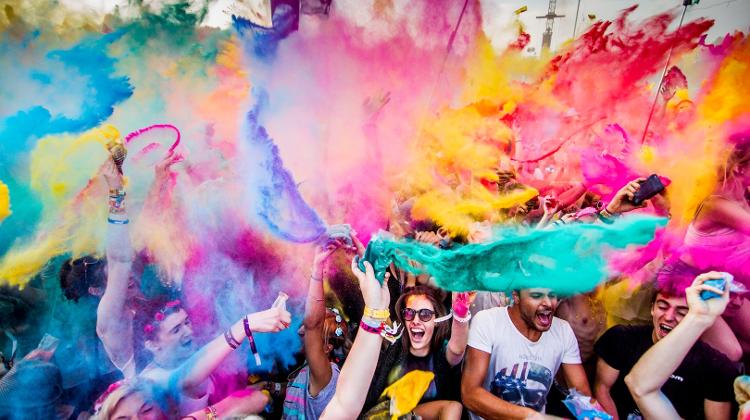 Since 1993, an island emerges from the Danube at Budapest every year for a few days, which does have its rules, but still, opens up gates to another world: the community experience of the era sweeps through with an elemental force, while the peculiar limitations of ordinary life sink beyond the horizon.

Imre Benkő’s images are delicate condensations of the experience that constitutes this ‘other world.’ He captures his observations in black and white, with his regular and panoramic cameras. He doesn’t only present the community experience, but also the individual Sziget-feeling in its totality.

The reality of the solitude in the middle of the crowd, the weary gaze of those exhausted by the preparations behind the scenes, the momentary absurdity of existing within the decorations of the festival. His photographs present not only situations moving masses of people, which is typical of festivals, but also the individual realizations of participating in these.

The photographer reveals the unique in the similar, showcasing the thousands of faces of the Sziget Festival, and he does that with the deep humanism so characteristic of him.

Imre Benkő’s images are also structured in such a way that they provide highlights and accents that are sometimes surprising, peculiar, often interwoven with gentle humor, and always meaningful. The subjects become loveable, and the viewers become interested in the characters finding and experiencing their identities in belonging to certain groups. The fans of different subcultures and musical trends, the representatives of different nations and generations all appear on the pictures as equal citizens, or participants, of the Sziget.

Rockstar Photographers, which was founded in two thousand twelve, is a group of talented and awarded photographers, who work side by side on capturing the festivals, while keeping to their individual styles.

They combine the official photographs documenting the festival programs with the pictures of numerous intimate moments, thus providing a comprehensive image of the ‘festival world’ itself.

They are best at showcasing the liberated moments, the unrestrained joy and the adulthood magic of playfulness in spectacular and vibrant ways. Their images present the volatile borderline between fantasies and reality, and how the possible can become real.

They are the ones that grew up together with the Sziget, and who photograph their own generation, and thus, quasi themselves, in the middle of the events, as photographers employed by important media outlets. They explore the strong visual world of the festival, and the situation-dependence of human behavior, and flout the traditional rules as necessary. Everything is different at the Sziget Festival, why would photography be the same?

The black and white pictures of Imre Benkő present the Sziget Festival between 1993 and 2016, while the colorful, dynamic, and vibrant visual world from the members of Rockstar Photographers shows a selection from the Sziget-feeling of the past four years.

The images of the exhibition are unrivalled documents of the last decade of the past century, and the first decade of the new one. The visitors of the exhibition can witness how the “student island” that started off twenty years ago with the slogan “we need a non-stop week of fun together” and mostly resembled Woodstock, has evolved into the largest cultural event of Central Europe by now.

Even for those who have been there, the surprise is guaranteed; but for those who did not participate in it, no better guide could be provided for exploring the Sziget-feeling than the images of this exhibition. (Gabriella Csizek, curator)