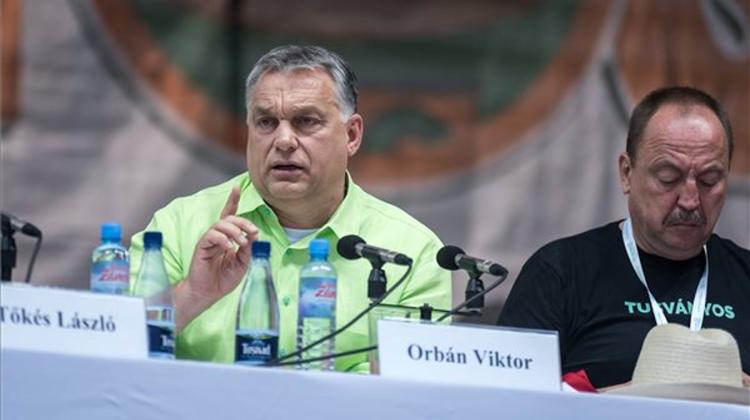 Commenting a speech Prime Minister Viktor Orbán made at the “Tusványos” summer university in Baile Tusnad (Tusnádfürdő), in central Romania, earlier in the day, Botka said that people next year will also vote for “an unjust Hungary lagging behind” or for a future “built on equality and justice”.

Botka insisted that Orbán was trying to fuel Hungarians against Europe, and was using the Visegrád countries “as an instrument”. Botka called emigration the largest problem Hungary was facing and said it would escalate to be “the largest exodus” in Hungarian history unless the current economy policy “favouring only the rich” is dropped.

Radical nationalist Jobbik leader Gábor Vona said Orbán had proved again that he can only provide the image of an enemy instead of decent wages and pensions, modern health care or education for the public. “Hungarians are fed up with incessant warfare, the arrogance of power-holders and corruption,” he said.

Orbán “is fighting with his own demons” and worried about his power rather than the fate of the country, Vona said, adding that instead of following “Orbán’s obsessions”, Hungary should “step on the road of sober mind”.

According to the leftist Democratic Coalition (DK), Orbán has “lost any contact with reality” and “got caught up in his own propaganda”.

DK deputy leader Tibor Nagy-Huszein told a press conference that Orbán’s speech failed to reveal real problems such as the country’s ailing health care or education, or why salaries were in the lowest range within the EU.

Nagy-Huszein said that Orbán had alluded to possible future alliances which would be in conflict with the EU, and suggested that “Orbán could still be working to lead the country out of the EU”.

Bernadett Szél, co-leader of the green opposition LMP, said that Orbán’s ruling Fidesz is “not Europe’s future but Hungary’s past”, which “a renewed Hungary” will not need after next year’s election.

The Liberal Party said in a statement that Orbán’s “anti-European” policies were detrimental for the country.

It is not “migrants, George Soros, Brussels, or NGOS” that pose a danger to Hungary but the government’s “continuous hate-mongering” which jeopardises both Hungary’s EU membership and peace within society, the Liberals said.

Orbán uses the Visegrád countries to weaken Europe rather than promote cooperation and seek joint solutions to the community’s problems, they said. “In spring 2018 we will have a chance to decide if we want to belong to Europe or Moscow,” the Liberals added.